Few things scream “bad optics” for a politician quite like publicly and enthusiastically assaulting a middle aged woman. Unfortunately for British Foreign Minister Mark Field, his communications manager must have skipped over that in his media training. 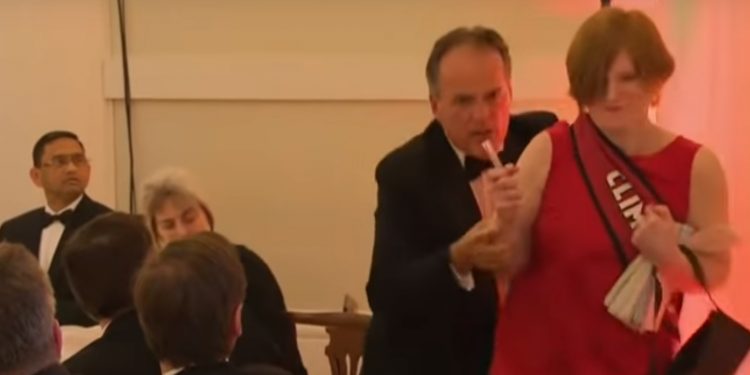 Few things scream “bad optics” for a politician quite like publicly and enthusiastically assaulting a middle-aged woman. Unfortunately for British Foreign Minister Mark Field, his communications manager must have skipped over that in his media training. Though this may not have been an issue with his other clients, when it came to the foreign office’s number one amateur mixed gender wrestling enthusiast, it ended in every communications manager’s worst nightmare.

When Field sat down at the London Mayor’s residence, Mansion Hall, to listen to a speech by British Chancellor Phillip Hammond, he could not have known what would have been in store for him that night.

After giving her an ocular-pat down, it was instantly apparent she was a “threat.” Dressed in a combat-ready red silk gown and armed with a stack of papers containing dangerous peer-reviewed science, a protestor made her way to the stage.

Once she neared his chair, Field jumped into action, heroically slamming the small-yet-potentially deadly woman into one of Mansion House’s extravagant, classical stone pillars. Flipping her round with ease he then uses his impressive strength to grab the back of her neck and march her out of the room.

All the other members of the British elite gathered there that day could do was watch, stunned into silence by Field’s actions. Slowly they begin to clap, not breaking into a round of applause but a slow appreciate clap fitting of the upper classes.