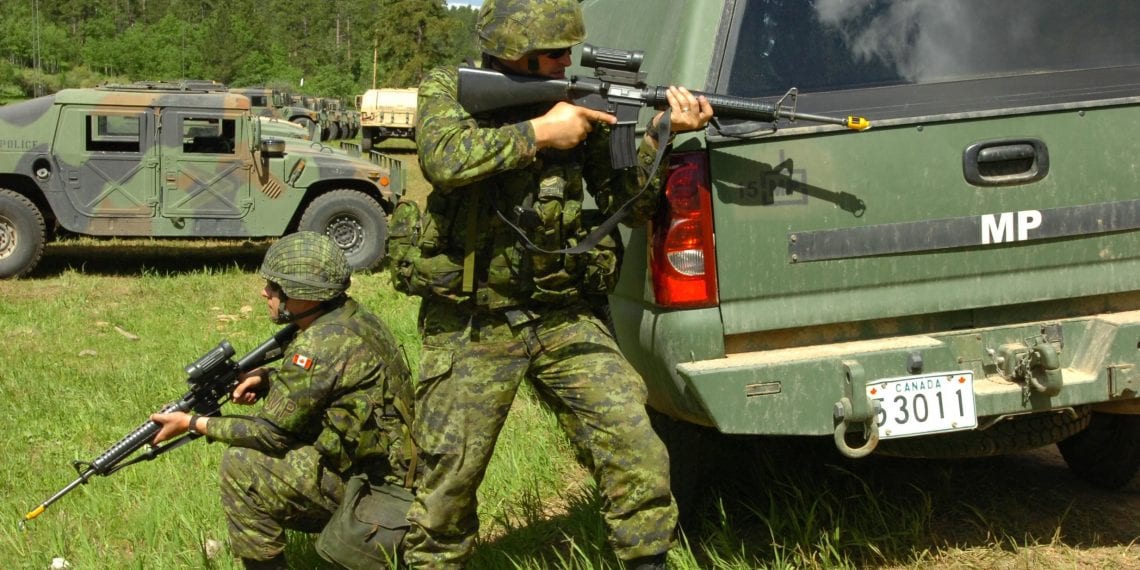 While the world descends into one of the most chaotic periods of conflict since the Cold War, Canada’s military is in urgent need of an update.

With potential hot-spots in the North Pole, the nation will require a well-funded defence force to repel any possible intrusions from nations like Russia, while the continued growth of China will require equal investments from all NATO allies.

Canada has been spending roughly 1.23 percent of GDP or less for the past decade on its armed forces. A serious plan is needed, not merely more campaign promises that fade into the abyss as other issues take a front seat.

While our healthcare system, the economy, and immigration are all crucial components of our society, they cannot continue to overshadow the growing necessity of a robust Canadian military.

Sadly, there is a pervasive stigma around politicians who have a “hawkish” approach to military investment. Most often, those who are singled out are members of the Washington D.C. establishment; White House and Pentagon leaders who are vested in advancing their personal fortune regardless of costs. Now, while there are serious inquiries about American interventionism and its associated costs, it would be disingenuous to argue that our southern neighbour’s funding levels are what Canada needs, or that that our military-industrial complex functions the same way.

The United States rests comfortably atop the ranking of military spending among NATO members, allocating 3.6% of its GDP on national defence.

While this may seem high to many, in reality it is on par with China’s military spending when looking at just new military equipment.

The United States pays a far higher average salary to its armed forces as a result of differing purchasing powers, that gap covers a significant portion of the spending difference between the two nations.

Canada, and the West face three major threats; China, Russia, and climate change. These all call for a new approach to foreign policy in addition to a robust, ready, and fighting force.

China is governed by Xi Jinping, an authoritarian who suppresses religious liberty and dissent. According to the reputable FreedomHouse, the country consistently ranks low in all areas of personal freedom protection.

In our globalized world, the Chinese government has used authoritarianism to police various levels of internet usage. Emily Dreyfuss of Wired calls China’s use of technology as an “instrument of control”. If that wasn’t enough, the government is now attempting to implement a dystopian social credit system that would eliminate individual privacy.

China’s government is using its citizenry as an experiment, and in doing so, neglecting the innate dignity of personhood. Technology can be advantageous, but when used to curb liberty it can only be classified as regression.

In March, Xi Jinping consolidated his own political power by amending the constitution’s provision of a two-term presidential limit. He has further intertwined his partisans in the larger political system, fortifying a prolonged term at the country’s helm.

Scholar Samuel Huntington posited in his work Political Order in Changing Societies, that modernization would lead to democracy.  This has yet to occur in China. As long as the Communist Party remains, there is little optimism that Asia’s superpower will welcome democratic change.

A more comprehensive explanation for the relatively peaceful Sino-Western relations originates from the “capitalist peace theory”. It argues that economic interdependence fosters diplomacy and a reluctance towards armed conflict.

Another cause for concern is China’s military, which has benefited tremendously from the country’s booming economy. An article in Reuter’s writes “In just over two decades, China has built a force of conventional missiles that rival or outperform those in the U.S. armory.” The country also boasts the world’s largest naval force and increased its second strike capability.

To little surprise, Xi Jinping has manipulated executive powers to prioritize territorial conquest. The Asia Pacific region has been completely dominated, and Africa is likely to follow. Over the course of the next decade, China will invest $175 billion in the continent and substantially increase its military presence in the area.

Containing China is an arduous necessity. Large swathes of territory cannot become proxied by an authoritarian regime. Furthermore, the restrictions faced by China’s citizens cannot become globally normalized. Protecting the Western-led international order is a task NATO must seriously consider in the face of growing adversity. International bipolarity has already risked large scale destruction and can have more devastating impacts a second time around.

Since taking charge in 1999, Putin’s Kremlin has mainstreamed imperialism by carrying over communist era authoritarianism. Similar to China, freedoms are restricted. Between 1992 and 2019, 83 journalists were killed, and there has been an effort by the government to politicize the Orthodox church.

Although elections are held, the “field is tilted” in Putin’s favour, a characteristic of hybrid-regimes. Lastly, the illegal annexation of Crimea and a likely reunification with Belarus are just two manifestations of Russia’s expansionist approach.  If Belarus is absorbed into the Russian Federation, the new borders will be directly adjacent to Poland, a valuable NATO ally. As the European Union faces disarray, the most devastating (and potentially final) blow would be Russian aggression.

The most pressing danger for Canada is Putin’s search for Arctic supremacy. CBC News published an article in February describing Russia’s increased armament of Severny Klever, a strategic military base in the northern region. Currently, “250 military personnel” have been deployed to maintain air and sea surveillance and anti-ship missiles. Putin claims that the Arctic region has resources worth up to $30 trillion. Controlling the region would be a valuable addition for him, as Russia is set to face a bleak economic future.

Canadian leaders must summon a quick response. Never before has a state demonstrated such intent to interfere with Canadian sovereignty. For this reason, our military needs to bolster and mobilize along the North Western region. Working alongside the United States, Alaska can provide a much-needed buffer zone.

Politicians from both sides of the ideological spectrum ought to accept the realities of climate change. It is an existential crisis that is set to worsen as time progresses. Former American Secretary of Defence, Chuck Hagel has even labelled environmental shifts as potentially leading to terrorism and biological risks.

In response, the United States has established the “Climate Change Adaptation Roadmap.” It allows for all branches of the military to be prepared for combat, while accounting for rising sea levels and food shortages. Climate change is a reality we must all face, therefore, it is necessary for our military to be ready for any circumstance.

The current levels of available military personnel may be misleading, Canada clearly boasts an exceptional number of citizens fit for service if events require it. A widely unpopular approach, but one that would prove utilitarian nonetheless is mandatory military service.

Trump may be brash, even embarrassing, towards world leaders, but he was completely right to demand NATO spend more on defence. In 2014, members of the alliance agreed to allocate 2% of their respective GDP towards the military. This has failed to happen, especially in Canada.

Allocating 1% of the country’s annual GDP to the military, does not suffice.

Politicians rarely discuss our armed forces, and there has been inactivity by past governments to make necessary investments.

In 2017, the Minister of Defence Harjit Sajjan claimed that the Canadian Armed Forces are in a hole. A lack of sufficient funding has left it unable to complete even the most basic of tasks.

But insufficient funding isn’t the only dilemma, quality entries have also been declining in recent years. The National Post noted that the Canadian military has been accepting new recruits who are fatter, less educated and harder to motivate than previous generations, per a Defence Department audit.

In order to remain at a constant level, the military needs more than 4,000 new recruits each year to keep 68,000 full-time troops in uniform.

Perhaps the greatest embarrassment is the chaotic state of our air force. In 2018, the Royal Canadian Air Force (RCAF) reported a shortage of 275 pilots. It also needs more mechanics, sensor operators and other trained personnel. The Air Force is a multi-purpose body and should be adequately funded, just as the other military branches. A greater initiative should be taken to ensure all measures for its strength are fulfilled.

Like any employee, service-people must enjoy their work environment.  Unfavourable conditions decrease any interest in joining the armed forces, creating the negative predicament our country faces.

In the Air Force, burnout is a sad reality for many because employees are left doing the work of unfilled positions. The overwork affects them psychologically and has already incentivized many pilots to leave for commercial airlines instead.

James Bezan, the Conservative defence critic, said that another likely cause for the drop in RCAF pilots is a result of the CF-18 fighter jets being too old.

No high caliber pilot would be happy flying 40 year old warplanes, especially for an underfunded military with low numbers.

A second National Defence audit has found that many of Canada’s military bases are falling apart. This is because of systematic underspending on the maintenance, repair and replacement of sewers, roads and electrical, heating systems. It also concludes that the risk of electrical outages, sewer backups and other service disruptions at military bases is set to increase. The disruptions threaten health and welfare of those living or working on or in close proximity to the base.

Canada has incredible potential. We are rich in energy, mineral, and timber resources; commodities that will help us navigate through an uncertain future.

As international institutions begin to grow unpopular, sovereignty may be a defining feature going forward.

NATO will not fall, but Canada need to transform its role from being an ally on standby to active participation. With an enlarged military, NATO can become an avenue for pursuing Canadian interests.

Conrad Black dedicates the latter stage of his book, The Canadian Manifesto to advocate for a set of changes oriented towards achieving dominance. Regarding foreign policy, he notes that greater wealth and military strength will propel us from “passivity” into a world leader worth emulating.

A reinvigorated Canadian military can become the impetus for NATO, halt aggression, and ignite a renaissance for the Western-led international order.

Fiscal responsibility is paramount but it shouldn’t hinder Canada’s protection.