In his backyard, Ahern has put together his own 16-foot replica of the Enterprise from Star Trek. Ahern noted that the almost perfect scale replica had taken him eight months to build. 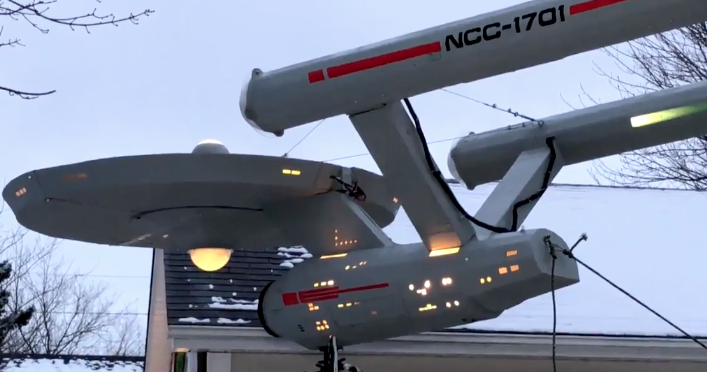 Moncton resident Martin Ahern has given his own take on Christmas this year with a display that has captured the attention of many.

First, Ahern spent a large portion of his time designing a soaring tree displaying thousands of separate programmable lights that was situated among other impressive displays.

“I was the average person who put up a few strings of lights, and for some reason I started to add little things here and there,” said Ahern to Global News.

These displays were just the beginning for Ahern who had something even more impressive up his sleeve.

“People are kind of shocked and amazed to see it,” He said

In his backyard, Ahern has put together his own 16-foot replica of the Enterprise from Star Trek. Ahern noted that the almost perfect scale replica had taken him eight months to build.

“I tried to program it close to the original with the original colours,” Ahern noted. “The saucer is in four sections and everything comes apart because you can’t build that all in one piece in the house.”

Ahern paid great attention to detail and constructed the ship using duct tape and wood. “You can’t have Christmas without Star Trek right?” he said, “It’s gratifying to see that people appreciate it.”

Ahern is inspired to take his displays to another level next year following the support that he’s received from the neighbourhood.