Fire crews were called to a fire at the church at 3am and by the time they got there the entire building was engulfed. 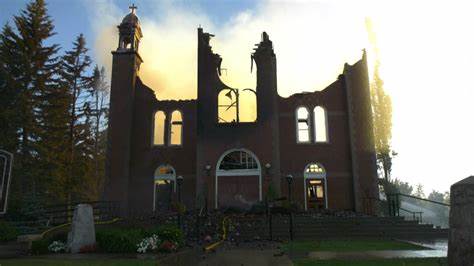 Alberta fire crews from multiple communities responded to a fire at St. Jean Baptiste Parish at 3 am Wednesday morning. The Roman Catholic church on Morinville's Main Street was left utterly destroyed by a fire officials say started in the basement and was too dangerous for fire crews to enter the building. The cause of the fire is still undetermined.

"The fire was already fully involved from the basement when the first fire crews got here. They entered the building but there was already collapse occurring on the inside of the church so they backed out and it's been a defensive or exterior fire fight ever since," Iain Bushell, the town's general manager of infrastructure and community services, told CTV News Edmonton.

"It's one of the largest buildings. It's very old construction so an awful lot of wood, so it went very quickly and it was a very difficult fire to fight," he said, thanking crews who came to help from Legal, Bon Accord, Gibbons, Sturgeon County, St. Albert and Edmonton.

In total, about 50 firefighters were on scene working rotating shifts to avoid heat-related injuries from the heatwave in western Canada. Construction on the church finished in 1907 and it hosted its first mass on January 1, 1908. The church is named after Father Jean Baptiste Morin, who led several families to the Morinville area from Quebec in 1891.

Morinville resident, Roger Morin, was married in the church on June 30, 1979. His wife passed away from cancer earlier this year. "I've had a very important loss in my life already, and this is all part of it," he said. "I really don't know how to feel. I just feel sad. Sad as hell."

Edmonton MP Tim S. Uppal wrote on Facebook, Another Catholic church set ablaze... These appalling acts undermine the important conversations being had on reconciliation and are an attack on our community."

Uppal is referring to the numerous churches being burned down across western Canada, particularly near indigenous communities. Last week, two churches located in the Similkameen Valley were destroyed by fire just days after two other churches were burned down in the southern Okanagan.

So far, none of the fires have been confirmed as arson nor has anyone been arrested. Chief Greg Gabriel said after two of the fires that the circumstancing are "pretty coincidental."