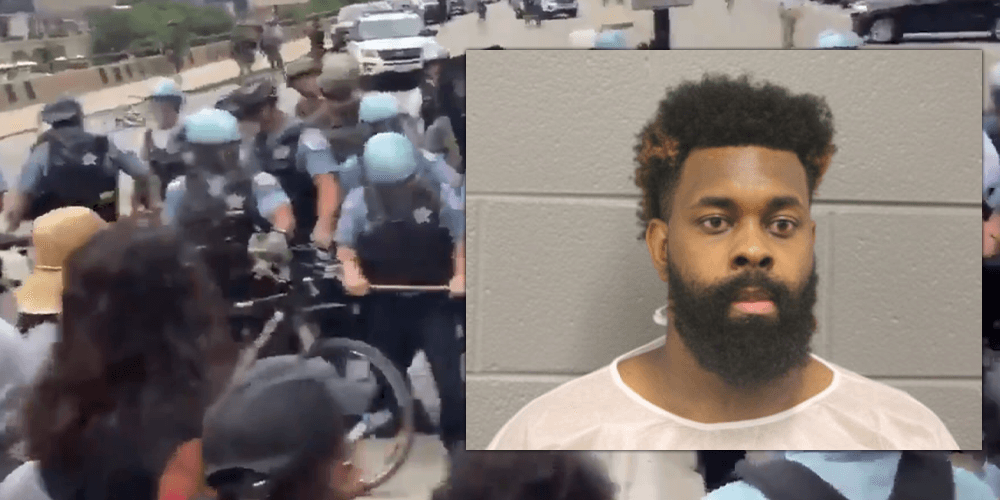 On Sunday morning, CPD released footage of the initial incident that ignited the violence.

The video displays group organizers donning ponchos to better identify themselves. Then umbrellas were opened to conceal actions of the members from police. The group collectively approaches law enforcement with locked arms, advancing on Michigan Avenue. An individual with a green bike helmet instigates the scuffle by lunging at the police line.

"The day began peacefully on the South Side, as our officers ensured that demonstrators were able to exercise their First Amendment rights in a safe manner," Chicago Police Department tweeted. No reported incidents occurred during a 5-mile march.

Then later in the afternoon, a separate demonstration occurred where several “anti-racism” and “anti-police brutality groups” allegedly hijacked the "peaceful protest," took over the city’s lakefront, and threatened to move northbound to the city’s “Magnificent Mile” shopping district, which is still suffering from looting early last week.

Police reported that multiple agitators deployed large black umbrellas, changed their appearance, and launched various projectiles. One officer was assaulted with a skateboard while another was punched.

Jeremey Johnson, 25, has since been charged with felony aggravated battery to a peace officer after repeatedly striking a CPD officer in the head with a skateboard.

The officer, who was wearing a protective helmet, sustained minor injuries and was treated at a local hospital, police officials tweeted. 17 officers were treated for minor injuries.

Nicoline Arlet was identified as the offender who knowingly and willingly took a body worn camera that had been ripped off a CPD officer. She has since been arrested and charged with felony theft of government property.

Elena Chamorro, 18, was arrested on scene and charged with felony aggravated battery against a peace officer and misdemeanor mob action for battering a uniformed CPD deputy chief.

Pepper spray was deployed to deter aggressors, police stated. At no point did CPD use tear gas.

Several dispersal orders were verbally issued by CPD, allowing for a "peaceful egress for those who complied" and detainment for those who violated the lawful order.

"If you refuse to leave the area, you will be arrested," police inform the crowd.

In a media briefing, CPD superintendent Chief David Brown stated: "To protect the peaceful protesters as well as their fellow officers, our officers responded proportionally to get the situation under control."

"I stood with the men and women of this department as this event moved throughout the downtown area," he continued, "and I am so very proud of their professionalism and their patience during a very, very difficult and tenuous event."

United in a single line with Brown leading the human barricade, officers pressed protestors first to the south and then to the west until the mob was surrounded. Protesters were then released from the “kettle” one-by-one after police searched for weapons.

Police blocked open exits from the riot with a line of police horses and patrolled the riverfront for stragglers attempting to leave the protest by climbing below street level and traveling along the Chicago River.

CPD bicycle officers formed perimeters while the bridges were raised over the river to keep protesters from advancing through the Loop.

“What we’ve seen is people who have embedded themselves in these seemingly peaceful protests and have come for a fight,” Lightfoot told CBS’s “Face the Nation” on Sunday.

“What happened yesterday was really over very quickly, because our police department has resolved to make sure that we protect peaceful protests but we are absolutely not going to tolerate people who come to these protests looking for a fight and are intending to injure our police officers and injure innocent people who have just come to express their First Amendment rights," she continued.

She went on to compare Saturday's events to the wave of looting witnessed just a week early, describing the theft and vandalism as a “planned attack.”

Lightfoot added that Chicago officials are collaborating with “federal partners to identify exactly who the ringleaders are” that caused an estimated $60 million in damages to city businesses last week and "and bring those who are responsible for these organized crime effort to justice."