"I'm going to skin Darren Bailey alive and feed his family to him. I know where Bailey lives, sleeps, and the school he works at. I'm going to make him scream and suffer. He better kill himself and if he doesn't, I’m going to kill him." 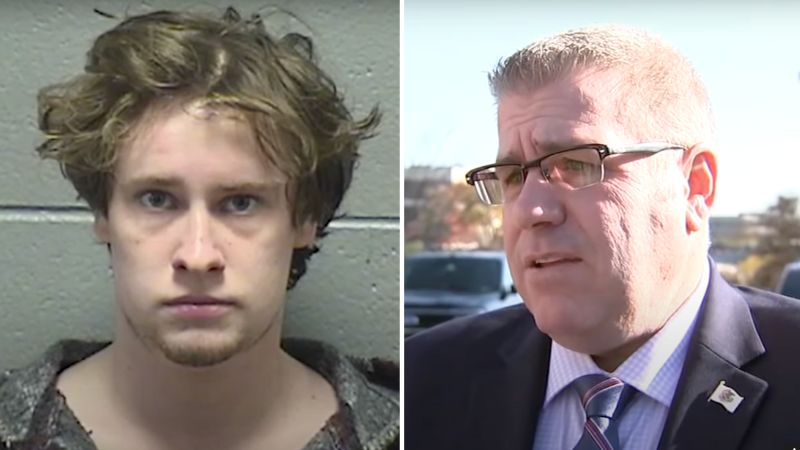 21-year-old Scott Lennox of Chicago was charged on Wednesday with three felonies after he allegedly called Illinois Republican gubernatorial candidate Darren Bailey's Springfield office and left a voicemail threatening to brutally murder and mutilate his wife and children, feed the eviscerated and dismembered body parts to the father and husband, and skin Bailey alive.

Local WGN News reports that Lennox said in the voicemail, "I'm going to skin Darren Bailey alive and feed his family to him. I know where Bailey lives, sleeps, and the school he works at. I'm going to make him scream and suffer. He better kill himself and if he doesn't, I’m going to kill him."

According to the Chicago Sun Times, Lennox also allegedly said in the voicemail, "He (Bailey) is a piece of white a** racist sh*t, and honestly if he doesn't kill himself, I will. You know what? I know where he lives. I know where he sleeps. I know where his kids sleep. And I know the f*cking school he works at."

Lennox reportedly repeated, "I’m going to skin Darren Bailey alive, making sure he is still alive, and I’m going to feed his f*cking family to him as he is alive and screaming in f*cking pain."

Lennox reportedly left the voicemail on October 28 at 10:27 pm. According to prosecutors, Lennox was at a bar with some friends when one of Bailey's political ads appeared on one of the televisions, prompting an intense argument amidst the friend group. Lennox left the conversation so enraged that he called Bailey to threaten the forced cannibalization of his family and eventual flaying of the candidate.

As Illinois State Police investigated Bailey and his wife and children were asked to avoid public appearances, were provided extra security, and "the schools affiliated with Bailey and his family in southern Illinois were placed on soft lockdown," according to the Chicago Sun Times.

When Lennox was in police custody, cops were able to see a series of Snapchat messages the suspect sent to his friends. In the social media threads Lennox apparently bragged that he was a "political terrorist" and used the laughing face emojis after hearing Bailey had to be put on lockdown in the news. "I feel so f*cking accomplished," Lennox said to a friend.

Lennox was arrested at 10 pm on Monday in his home at 3300 N. Lake Shore Drive. Cook County Circuit Court Judge Susana Ortiz set his bail at $75,000 on Wednesday, placed him on electronic monitoring, and forbade him from contacting Bailey and those associated with the GOP candidate in any way, shape, or form. Judge Ortiz said, "This went above and beyond anything that is acceptable, even in the realms of political discourse."

"It simply will not be tolerated," she added.

"Divisive, inflammatory, and misleading rhetoric is driving hatred across our state as some attempt to label political opponents as dangerous threats. Whether we agree or disagree on policies, we are all Americans. I pray this young man gets the help he needs. We must bring our state together and fight for the safety and prosperity of every Illinoisan," Bailey said in a statement.