The Chicago teachers union tweeted out that they believe parents' desire to get students back to school is a product of racism and sexism. 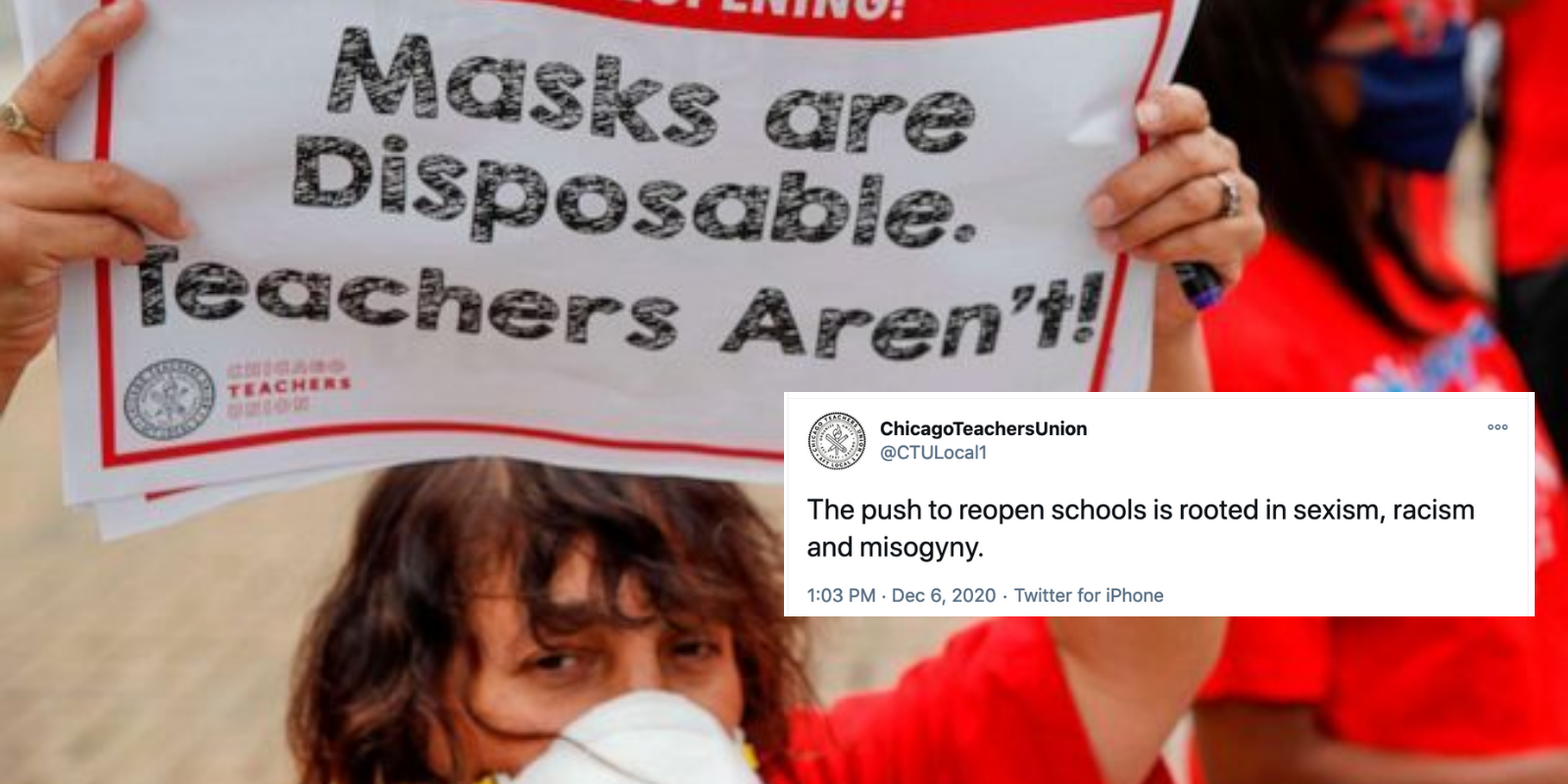 The Chicago teachers union tweeted out that they believe parents’ desire to get students back to school is a product of racism and sexism.

For the Chicago Teachers Union there can be only one reason that parents would want to see their children receive an education, and it’s identity-based hatred. Neither the union nor the politicians have any sensible reasons why children shouldn’t go back to school. Medical professionals continue to say that children should be in school. Data does not support the concept of curing the virus by withholding education, so the union has resorted to calling people racist.

"The push to reopen schools is rooted in sexism, racism, and misogyny."

It’s easy to see how they could misunderstand that parents’ desire for their children to be educated is rooted in hatred, because the public has been conditioned to understand virtually all things through the lens of hidden hatred.

The idea here expressed by the Chicago Teachers Union is that the fact that teachers are women, and are minorities, means that their concerns are more essential than the concerns of parents, even if those parents are at least half women, and probably also black and brown.

Parents have been watching their children suffer due to the pandemic, and unlike the suffering of the aged, who have been dying as a result of the infections, children are suffering corollary effects. Isolation has been a huge problem for young people, and as their lives elapse in solitude their vital educational years slip away behind screens.

For decades, educators, including union teachers, have been emphasizing the importance of an education. Money at state, local, and federal levels have flowed into vital education programs and support for students and teachers so that our nation’s future can be secured with the bright, young minds who will inherit it.

But in 2020, fear is more essential than education. In fact, fear is what is driving policy, perception, and behavior across the US and the anglosphere. Fear is fueling this crisis, and America’s children are paying the price.

There have been 439 Americans between the ages of 15-24 who have died under the same classification, according to the CDC. As of Nov. 25, it was reported that 20 percent of the total COVID deaths in the US were suffered by Hispanic Americans, while 19 percent pf COVID fatalities were incurred by black Americans.

On March 17, all Chicago schools, public and private, were closed to in-person learning. Gov. Pritzker announced on April 17 that they would stay closed through the end of the academic school year. New Trier High School, a public school in Chicago’s suburb of Winnetka, was open just five days in October before it was closed again. Schools superintendent Paul Sally made clear that the closure was not due to COVID case activity at New Trier.

"As in the previous week, our pause this week is due to the continued seriousness of the COVID-19 numbers across Illinois and in our community, not the number of New Trier student and staff cases," Sally said.

Now, Chicago Public Schools (CPS) have a plan to reopen in January, but not entirely. CPS states that pre-school students will be able to attend in classes starting on January 11, while elementary grades will come back on February 1. There is still no timeline for the return of high school students to school.

The Chicago Teachers Union had a high profile strike in 2019, that closed schools for 11 days and garnered the support of Massachusetts Senator and then presidential candidate Elizabeth Warren. The contract negotiations were contentious, and that rancour has reportedly made school reopening conversations more difficult.

The union has threatened to strike again if CPS tries to bring kids back into the classroom in any capacity at all. But CPS has said that the union is continuing to "obstruct and mislead the public," and though the union will not engage, CPS is working on how to open schools to Chicago's children.

After deleting their tweet, the Chicago Teachers Union filed an injunction against Chicago Public Schools, saying that they should not be allowed to open pending a list of demands.