"Always in and out. That feels great for both of them," reads one sentence in "My Body is Growing." 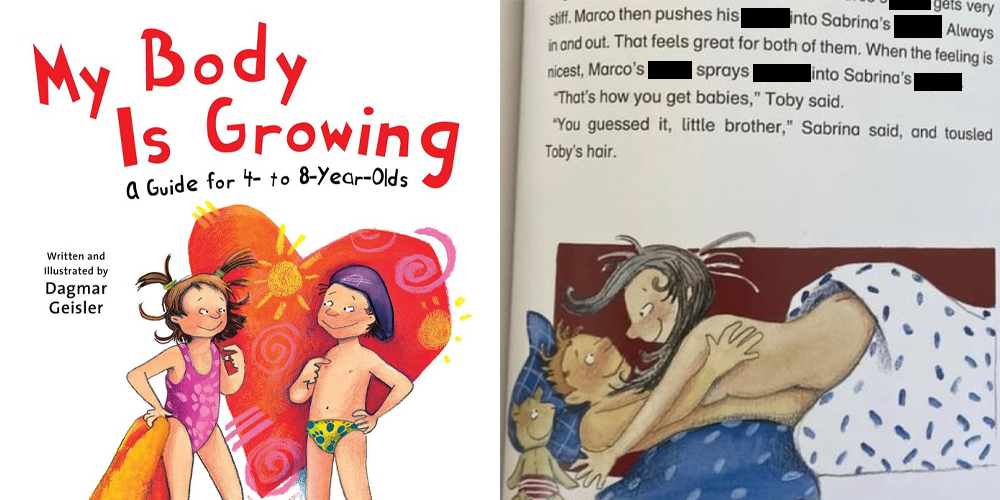 A prolific children’s book author, Dagmar Geisler, has been under social media fire in recent days over the contents of her book My Body is Growing, which publishers claim to be for children as young as four.

The page of the book in question that’s causing public outcry is one that describes a scene where Sabrina describes to her little brother Toby when she has sex with her boyfriend. It’s complete with graphic terms and imagery about the process of intercourse.

According to the description on Simon & Schumer, the distributor says the book "is the perfect introduction to body awareness and sexual education for preschool and early elementary school students."

At the time of writing, it’s currently not available on Amazon. A google cache archive of the book’s page on the site shows it was taken down within the last 72 hours. However, "My Body is Growing" is still available for purchase at retailers like Walmart.

Discussions about the outrage have popped up on both the Daily Mail and The Sun.

"This is one of thousands of the K-12 paperback books flooding schools and libraries. The national education cartel is determined to steal childhood innocence," wrote Ramona Bessinger back on May 11th. Her Twitter bio describes her as both a mother and school teacher.

In terms of pushback, one commenter highlights how Dagmar Geisler also "wrote *the* seminal, bestselling book informing children about sexual abuse and making them vigilant against it."

(That book, called "My Body Belongs to Me from My Head to My Toes" is still on Amazon.)

But those against the book took issue with the suggested age minimum for the book’s target audience.

Roughly a week later, a Canadian mother of two named "Suz" reacted with anger about the same page. "When the feeling is nicest, Marco’s penis sprays semen into Sabrina’s vagina," the children’s book says.

"I'm about to contact my kids school and demand an inventory list from their damn library! Book is called 'my body is growing, a guide for 4 to 8 year olds' Read that again FOUR TO EIGHT YEAR OLDS"

Again, the replies are a mix of concern about the young target audience, but others who ask what exactly the appropriate age for sex education for kids is.

"It is important to be legally married first...does this book read that the man and woman are/is married?!" one reply pointed out.

This situation is the latest in a line of controversies surrounding what kind of content is being taught to children. Gender Queer was another example of sexually explicit depictions, targeted towards young audiences. But "A Book About Whiteness," attempted to introduce school children to the progressive leftist’s narrative of racial politics.