Stein claims as soon as he went to speak to Crenshaw, Crenshaw's "whole team swarmed on me, they're grabbing me, pushing me." 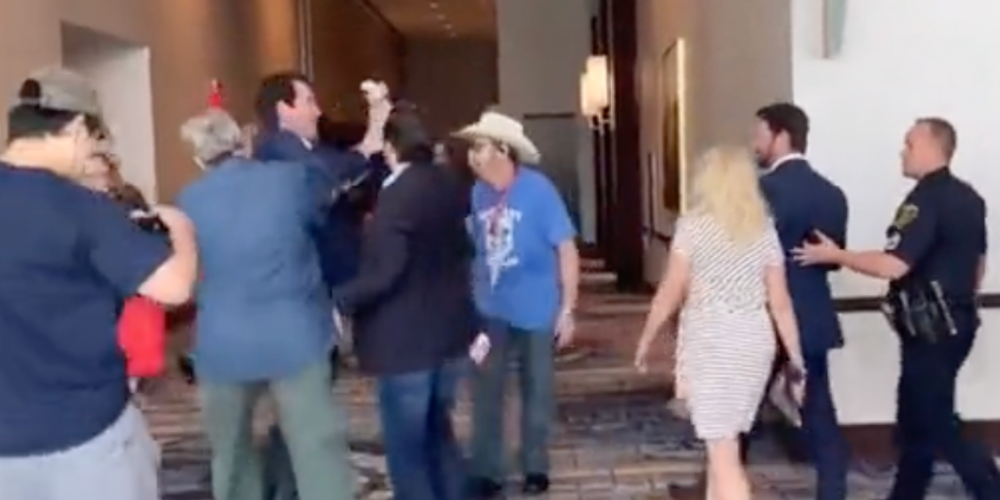 Alex Stein, a conservative activist, comedian and Texas State Delegate, confronted Dan Crenshaw at the Texas GOP Convention in Houston, Texas. Stein, a comedian, confronted Senator Ted Cruz earlier this week for vacationing in Cancun when Texans were without power.

Footage shows Stein attempting to approach the Crenshaw to call him a "RINO" and likening him to late Senator John McCain before stopped by Crenshaw’s security team.

RINO, a Republican in Name Only, is a phrase commonly used to categorize republican figures who they believe fall out of line with an America-first mindset. January 6th committee hearing members Liz Cheney and Adam Kinzinger are among other Republicans frequently deemed RINOs.

Left-wing outlet Mediate picked up the story and slapped a potentially defamatory headline on the article writing, "Dan Crenshaw & Staff Assaulted by Right Wingers Shouting 'Eyepatch McCain' and Saying He Should be 'Hung for Treason'"

Mediaite claims that Crenshaw staff was physically assaulted and that Crenshaw's campaign manager was "pushed aggressively into a pillar.” However, review of several angles of the encounter appear to only show Stein being physically confronted and pushed against a wall by two men from Crenshaw's team.

Crenshaw's security reportedly knew who Stein was and told him that he would be removed if he attempted to speak to Crenshaw, but the consequence of removal was one Stein was willing to accept for his confrontation. Stein claims as soon as he went to speak to Crenshaw, Crenshaw's "whole team swarmed on me, they're grabbing me, pushing me." Stein confirmed that one man pushed him against a wall.

Crenshaw responded to the Mediate article on Twitter, adding an insult towards Stein saying, "This is what happens when angry little boys like [Alex Stein] don’t grow up and can’t get girlfriends."

Human Events Daily's Jack Posobiec drew a similar conclusion to many people replying to Crenshaw's tweet saying that it did not appear Stein assaulted anybody.

Crenshaw has been under fire from many conservatives as of recent for seemingly restrictive policy positions on firearm access and possession.

The Post Millennial has reached to Dan Crenshaw's team for comment, but has yet to get a response.