Brand has said that corporate media uses the term "right-wing" as a slur to destroy free thinkers, and as if on cue, that's exactly what media is now trying to do to him. 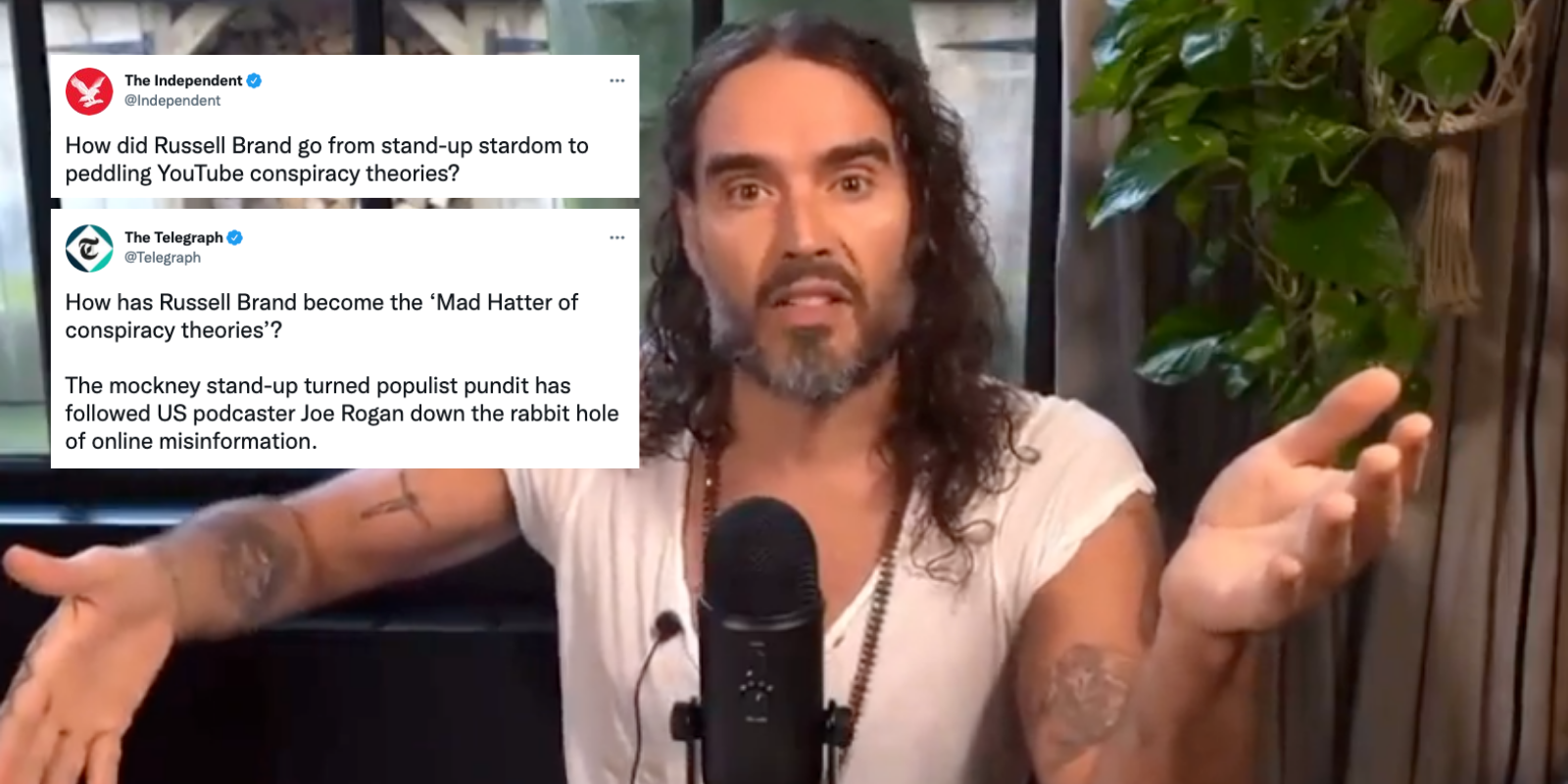 Russell Brand is speaking his mind, and mainstream media doesn't like it. In two articles this week, one from The Telegraph and another from The Independent, Brand has been disparaged as a "conspiracy theorist." Why? For speaking his mind, following the logic, and the money, to ask questions about Covid, the war in Ukraine, crypto-currency, and the failures of western leaders in the face to uphold and defend freedom, liberty and the rights of their citizens.

The Telegraph brands him a "conspiracist," while The Independent claims that he is "alarmist" who has gone from "stardom to peddling YouTube conspiracy theories," and asks what Brand "has to gain."

The Telegraph says that "Brand never clearly nails down his own views, 'discussing' conspiracies, so as to skirt accusations of being a conspiracist. He is helped somewhat by those who still associate him with his cheeky Noughties screen persona and former marriage to pop star Katy Perry, as well as his quest for wellness – the subject of another of his YouTube channels – and faithful practise of yoga and veganism, all of which obfuscate possible sightings of tin foil hats."

This as though Brand's views aren't clear. He wants viewers to ask questions, to hold their leaders to account, and to not allow their freedoms to simply be stripped away by a media, globalists,

Brand has said that corporate media uses the term "right-wing" as a slur to destroy free thinkers, and as if on cue, that's exactly what media is now trying to do to him.

He's claimed that the support among the punditry for Ukraine has been comprised of "empty gestures," virtue signaling nonsense like holding flags, putting Ukraine's blue and white colors in social media bios, and saying that they "stand with Ukraine," despite that not particularly meaning anythings.

He's called Canadian Prime Minister Justin Trudeau a "tyrant" for implementing the nation's first use of the Emergencies Act and used it against his own people for their crime of protesting his restrictions on their lives and livelihoods.

The Independent claims that "The popularity of Brand’s videos is a testament to just how disillusioned many people are with mainstream media, and just how eager they are for open, defiant skepticism." The article admits that much of the reporting in mainstream media omits "the evils of western foreign policy," but goes on to speculate that it would be essentially absurd to believe that this is "really because of some grand orchestrated effort to keep the public ill-informed," claiming instead that "it's just for brevity or relevancy's sake, or for legal reasons, or due to vague and unspoken corporate pressures."

Both articles suggest that Brand should take a stand and express what his views really are, so that he doesn't get lumped in with conspiracy theorists like—gasp—Joe Rogan, Jordan Peterson, or Alex Jones. What these outlets don't understand is that Brand is exploring these questions.

Together with his viewers, Brand is watching the crumbling of western civilization. He's watching governments that purport to protect and defect the rights of their citizens turn on those citizens instead and demand, rather than earn, their trust. He's watching as multi-national corporations appear to close ranks to protect their profits at the expense of citizens worldwide. He's watching media willfully, intentionally, and unapologetically obfuscate the facts and then claim lies are truth.

Brand is discovering, exploring, understanding, and forming his views and perspectives in real-time. That's what makes him so interesting. Brand is honest in his questioning, and it is a refreshing antidote to the incessant certainty of western leaders and their sycophantic, pandering media.

Brand asks real questions, and the answers are not yet clear, but that justifies the need to ask them all the more. It's not a conspiracy theory to question authority, to demand leaders be accountable to citizens instead of the reverse, or to insist that truth, and not fabricated narratives designed to uphold ideologies, be told by media outlets. Brand is on to something, that's why he's got the viewers, and that's why he's taking heat.