Corporations change their logos to rainbows for Pride Month, but not in areas where LGBT is forbidden

These rainbow logos are nowhere to be found on their Middle Eastern or African accounts. 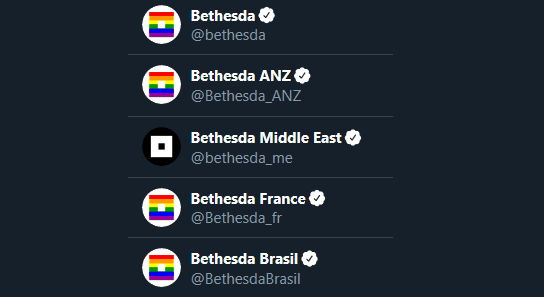 As we enter June, which is Pride Month, a plethora of corporations and businesses are showing their support for the LGBT community by altering their logos on social media into rainbows. Bethesda, Bank of America, Mercedes-Benz, Microsoft, and many others had their rainbow logos ready to rock at midnight on June 1st.

Social media has noticed, however, that almost almost all of these companies are showing their support exclusively in regions where gay, lesbian, bisexual, and transgender people are generally accepted. Specifically, these rainbow logos are nowhere to be found on their Middle Eastern or African accounts.

Below are a few blatant examples from Mercedes-Benz and Bethesda:

While many see it as a sign of progress that these companies are showing their support, even if in limited regions, others are slamming it as cowardly “rainbow capitalism.” Surely taking a real stand would be daring to flaunt the pride logos even in countries where it may be unpopular. I personally tweeted:

While the brands and their blatant hypocrisy is providing the internet some laughs, it ultimately highlights that the risk of staying silent during Pride Month in the Western world is too high, while the risk of showing support in areas like the Middle East is equally high. The takeaway should be a greater focus on rights for LGBT people (and all people) in areas places where they truly lack rights and human dignity.

As a trans woman I am not legally allowed to step foot on the soil of the majority of countries in the Middle East without being arrested or killed. This is the reality for millions of people unfortunate enough to be born in these areas. LGBT Americans should not only feel lucky to live here, but begin shifting their focus to those in actual danger.