The report was contained in a filing this week from business owners and residents that are suing the city over damages allegedly incurred during the deadly 2020 Capitol Hill Autonomous Zone (CHAZ). 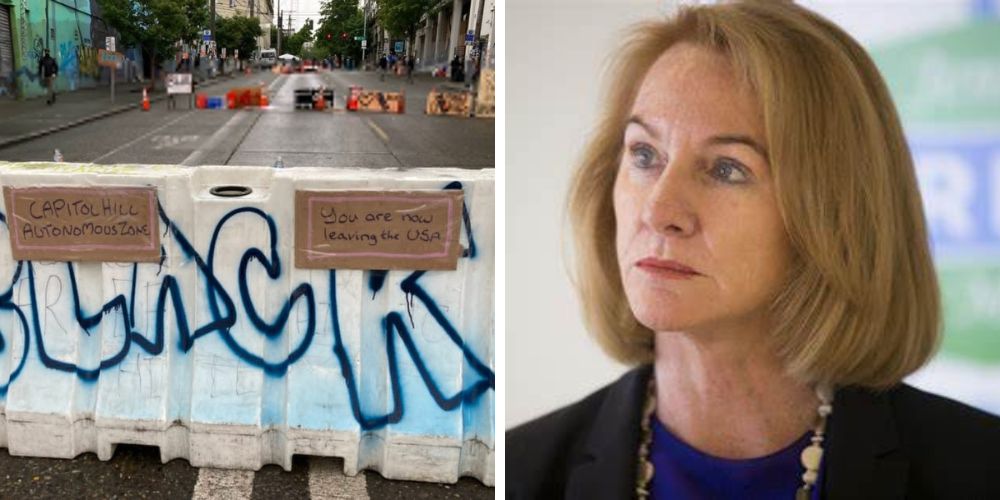 Ari Hoffman Seattle WA
Oct 3, 2022 minute read
ADVERTISEMENT
ADVERTISEMENT
Almost 200 texts, even more than were previously known, were deleted manually from then-mayor of Seattle Jenny Durkan's phone in the months after Seattle's 2020 riots, the deadly autonomous zone, according to a new forensic report.

The report added that the texts of other officials were destroyed through phone resets the same month. Durkan called the summer of rioting and mayhem in Seattle in 2020 the "summer of love."

The report was contained in a filing this week from business owners and residents that are suing the city over damages allegedly incurred during the deadly 2020 Capitol Hill Autonomous Zone (CHAZ).

The plaintiffs are accusing Seattle officials of "spoliation of evidence" and asked the judge in the federal court case to impose sanctions by finding the city liable for the allegations in the case.

According to the filing, the only plausible explanation for the loss of the texts, including many that were lost after lawsuits began over the CHAZ was that "officials intended to deprive Plaintiffs of crucial evidence."

City Attorney Ann Davison's office responded by accusing some of the plaintiffs of deleting their own texts about CHAZ in court filings. The city is requesting that the judge throw out the case by claiming that Seattle officials attempted to de-escalate the autonomous zone.

That argument will be difficult for the city to make after The Post Millennial revealed that officials spent over $1 million dollars fortifying the positions of the armed occupiers in the zone and that city officials were coordinating with the "Warlord of the Autonomous Zone" Raz Simone. Additionally, city officials acquiesced to many other of the occupiers’ demands including removing police from the zone and abandoning the Seattle Police Department East Precinct which led to the formation of the zone.

In August it was revealed that the King County Sheriff's Office together with the King County Sheriff was investigating whether former Mayor Jenny Durkan, ex-police chief Carmen Best and other city officials violated the law when thousands of text messages during the 2020 riots and CHAZ were deleted from their city-issued phones.

The willful destruction or concealment of a public record is a felony in the state of Washington punishable by up to five years in prison and a $1,000 fine. Text messages are considered public records and are required under state law to be kept. Additionally, the texts could serve as evidence in multiple pending lawsuits against the city over its handling of the 2020 riots and the CHAZ.

Multiple media outlets, including The Post Millennial, had filed disclosure requests for the mayor’s texts in the aftermath of the riots that rocked the city in the summer of 2020, the abandonment of the East Precinct, and the formation of the Capitol Hill Autonomous Zone. The city attorney's office spent over $400,000 on a forensic analysis to try to recover the texts.

The Post Millennial was told that the texts for Durkan, Best, fire chief Harold Scoggins and other officials were unavailable and given excuses that texts from all three of the phones had been lost for various reasons.

The forensic analysis, commissioned by City Hall in response to lawsuits over the riots and CHAZ was released in February and showed that Durkan’s phone was set in July 2020 to automatically delete texts after 30 days and that also been set to delete texts stored in the cloud.

The new report showed that in addition to 5,746 of Durkan’s texts destroyed by the 30-day automatic deletions prior to June 25, 2020, 191 were lost between June 25 and November 16 due to manual deletions.

Additionally, the phones of other city officials who were involved in the CHAZ and the riots were reset in October 2020 as the riots were winding down. 27,138 texts were deleted from Best’s phone and 15,843 from police chief strategy officer Chris Fisher’s phone. Factory resets that scrub data were done on the phones of Scoggins, emergency operations official Kenneth Neafcy and public utilities official Idris Beauregard.