"I can't tell you who is in charge right now but I can tell you it ain't Joe Biden." Rep. Jackson said the White House is looking "more and more like an assisted living facility." 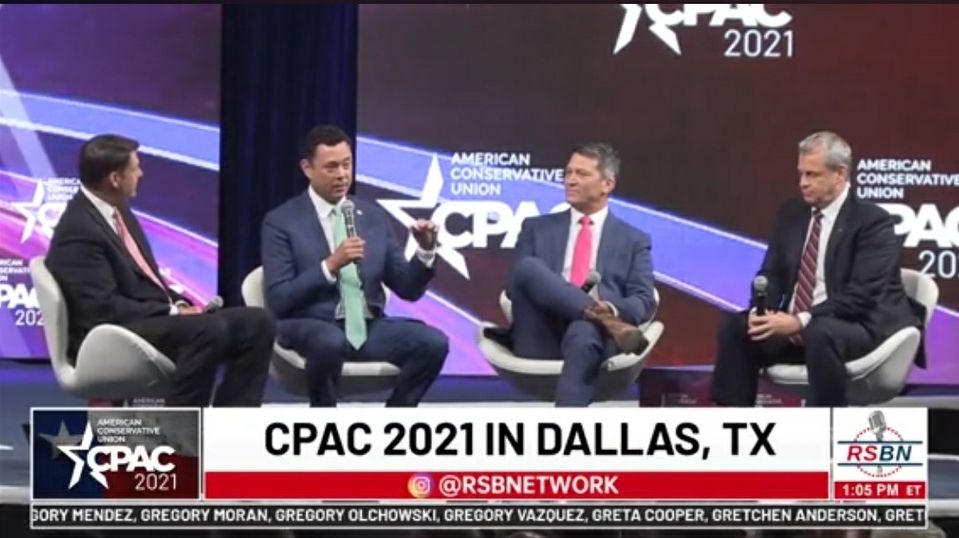 In a midday panel at CPAC, the Conservative Political Action Conference, in Dallas, Texas, "Who's the Boss, Where's My Apple Sauce? Who's Really Running the Biden Administration?"

Rep. Jody Arrington (TX-19), former Rep. Jason Chaffetz, and Rep. Ronny Jackson (TX-13) discussed the optics of the Biden administration. Moderated by Kurt Schlichter, a senior columnist at Townhall, the guest panelists did not hold back in calling out the Biden administration and President Biden himself for appearing weak and senile.

"It's going to be incumbent upon the American people to demand to get answers to this question…'Who is running the Biden administration?'" He replied.

Chaffetz suggested that concerned Americans should look at Biden's chief of staff, Jill Biden, Susan Rice, and others who have influence over Biden to understand their policies. He criticized the liberal views Biden's staff and policy appointments hold.

"The President literally has thousands of appointments that can populate the whole government. So when they talk about the rise of spending they are talking about putting more bureaucrats, more control there… they are growing the government," Chaffetz said.

The former Congressman said the Biden administration is using the idea of improving infrastructure to bloat the government further.

Rep. Jodey Arrington, who appeared to be wearing cowboy boots, and represents a portion of west Texas, said Biden showed America his true, liberal beliefs when he appointed Kamala Harris as Vice President.

"She was the one as Senator who was saying ICE enforcement agents are akin to the KKK… That leftist ideology has permeated through your federal government and mine. That fourth branch of government is very activated… It's real. It starts at the top."

Rep. Jackson, a physician who worked for three presidents, was adamant that Biden's mental well-being seemed to be suffering. "I can't tell you who is in charge right now but I can tell you it ain't Joe Biden." Jackson said the White House is looking "more and more like an assisted living facility."

Jackson recalled just how much the mainstream media expressed their consistent sentiment that Trump was mentally unfit to be President simply because they didn't like his tweets. Now they have someone who has "always been prone to gaffes" who actually now seems disoriented and unable to remain on task during press conferences, Jackson said.

Jackson said Biden "doesn't inspire confidence in our allies and sends the wrong message to our adversaries." While Jackson said he world refrain from an official diagnosis, he did posit that Biden was experiencing "cognitive decline based on his age."

The conversation shifted to Biden's family, specifically Hunter Biden and the border crisis, a hot topic in Texas right now. Rep. Arrington did not hesitate to call out the Biden administration for failing to take the issue seriously.

"We have a Commander-in-Chief who is not willing to provide for the people's common defense… the lawlessness and chaos ensuing at our border is shameful, it is an international embarrassment. Texans have the sovereign power to defend our power and our people… When the federal government fails, we don't have to be helpless." He called on Texans to protect their own interests and the crowd cheered in response.

Toward the end of the panel Chaffetz derided the mainstream media who he said has been covering for liberal administrations for about eight years. "We don't have people who will do their job and follow the facts. They have an agenda and it's sickening."

All of the panelists indicated support for Donald Trump's return as US President.

CPAC is a conference typically held annually in Washington, DC. This is the first time it's been held in Texas.  It's a gathering of conservative activists and politicians and serves as a pep rally to a segment of conservatives.