"Yesterday, @TwitterSupport disappeared my verification badge. I've inserted my pronouns into my bio in hope of having it restored. Fingers crossed," Rufo said in a Twitter post on Wednesday. 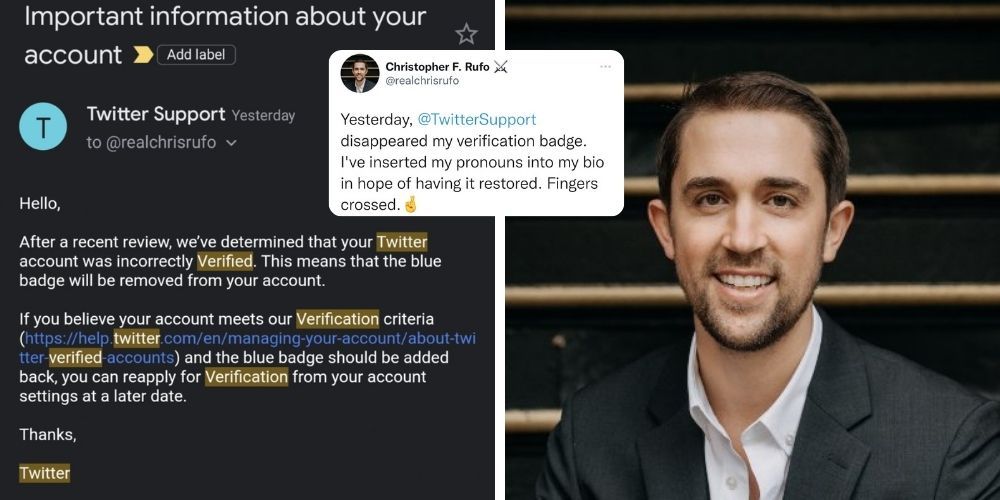 Rufo has been a leading investigative journalist on exposing the controversial teachings of critical race theory in both public and private sectors in the United States, which includes reporting on CRT in schools and companies like Google, Disney, and Bank of America.

"Yesterday, @TwitterSupport disappeared my verification badge. I've inserted my pronouns into my bio in hope of having it restored. Fingers crossed," Rufo said in a Twitter post on Wednesday.

Christopher Rufo, who writes for City Journal, questioned the timing of Twitter's decision to remove the badge as their decision came right as Rufo was reporting on critical race theory indoctrination for employees in big tech companies. Critical race theory predominately teaches the concept that America was founded upon racism and insists that all white people are naturally racist.

Individual's took to Twitter to express the Big Tech company's obvious biased decision and expressed the hypocrisy that they seem to only target "one side."

"The first person I ever saw being punished by Twitter with removal of their blue verification badge was Julian Assange, now this. It's such a bizarrely punitive use of that designation – which is supposed to just authenticate identity – but one apparently loses it reporting," investigative journalist Glenn Greenwald said.

"I love Twitter and believe that it could be a tremendous force for good," Rufo told The Post Millennial. "But they have to maintain consistent standards and a commitment to open discussion. Unfortunately, they have shown bias again and again, and while I cannot say for sure why my account was 'unverified,' it raises the suspicion of partisanship. I hope Twitter corrects this error and makes their process transparent, fair, and equal."