The demonstrations come after a historic uprising in Cuba which began over the weekend, where Cubans gathered in droves, calling for liberty and freedom. 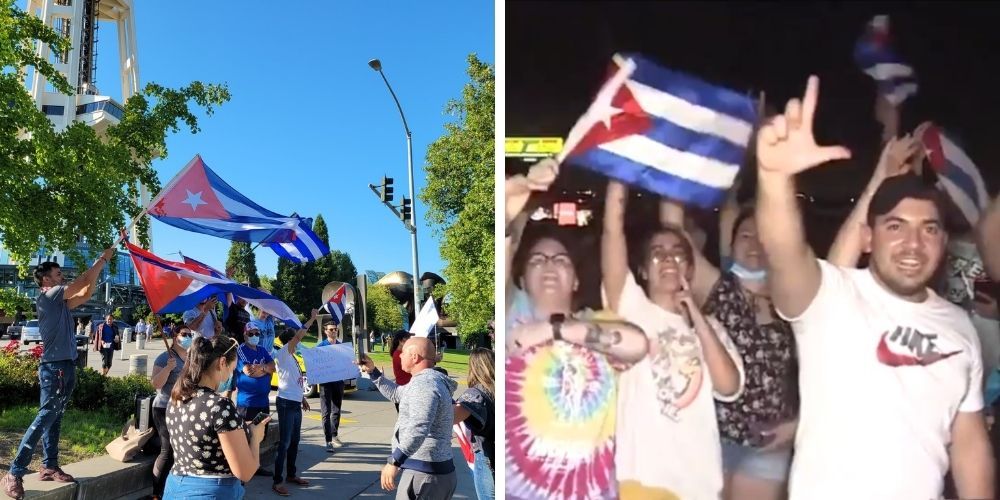 Demonstrations erupted across the US for the second straight day in solidarity with anti-communist protesters in Cuba. From Miami to Seattle, thousands of community members have taken to the streets to rally for freedom for the Cubans from their country's dictatorship.

Tuesday night in Southwest Miami-Dade, demonstrators marched in support of the Cuban people and their recent protests the Palmetto Expressway, shutting down the roadways for hours.

In Seattle, dozens of demonstrations assembled in the shadow in the Space Needle for the second day in a row peacefully waving Cuban flags and wearing American flag themed bandanas.

Demonstrators told The Post Millennial that they are hoping for US military intervention in the country to help the protesters. US President Joe Biden on Monday said in a statement, "We stand with the Cuban people and their clarion call for freedom and relief from the tragic grip of the pandemic and from the decades of repression and economic suffering to which they have been subjected by Cuba’s authoritarian regime.''

Biden also urged the Cuban government to serve their people "rather than enriching themselves.''

The demonstrations come after an historic uprising in Cuba which began over the weekend, where Cubans gathered in droves, calling for liberty and freedom. The protest held in cities across the island were some of the biggest displays of anti-government sentiment seen in years in the communist controlled country.

The Miami Herald reported that Cuba is in the midst of its worst economic contraction since the end of the Cold War. They attribute "chronic inefficiencies" and "paralyzing bureaucracy" decimated essential food and agriculture sectors. Rising inflation have also led to long lines for food.

"We’ve never seen anything like this before," Republican Representative María Elvira Salazar wrote on Twitter. "The Cuban people are determined to be free."

Cuban authorities confirmed Tuesday that one person died during demonstrations, while anti-government activists in Cuba said that more than 100 people have been arrested or are missing following widespread protests.

Journalists have also been detained along with the protesters including Camila Acosta, a writer for the ABC newspaper in Madrid. Spain's Foreign Minister Jose Manuel Albares has called for her release.

US Rep. Mario Díaz-Balart (R-FL), a Cuban American, introduced a resolution to support the Cuban people in their demands for freedom against "the brutal oppression of the Communist dictatorship in Cuba," and asked the international community to stand behind the recent protests against the island’s regime.

In a Monday letter to President Biden, Sen. Marco Rubio (R-FL) wrote, "The Cuban dictatorship has rejected every effort that would allow the Cuban people to prosper, including your previous efforts as Vice President. Despite the Obama Administration’s efforts to engage with the regime, the dictatorship continues to restrict travel for political opponents, siphon off the salaries of Cubans employed at foreign firms and severely limit the economic freedom of its citizens to own property and start a business. The current protests in Cuba are not just about current economic shortages. They are about the longstanding and deliberate actions taken by the dictatorship to stymy the economic prosperity and political freedom of the Cuban people."

World leaders have also expressed their support for the Cuban people following the protests across the island country.