"This is a disaster, and an embarrassment for Pediatrics," said journalist Jesse Singal. 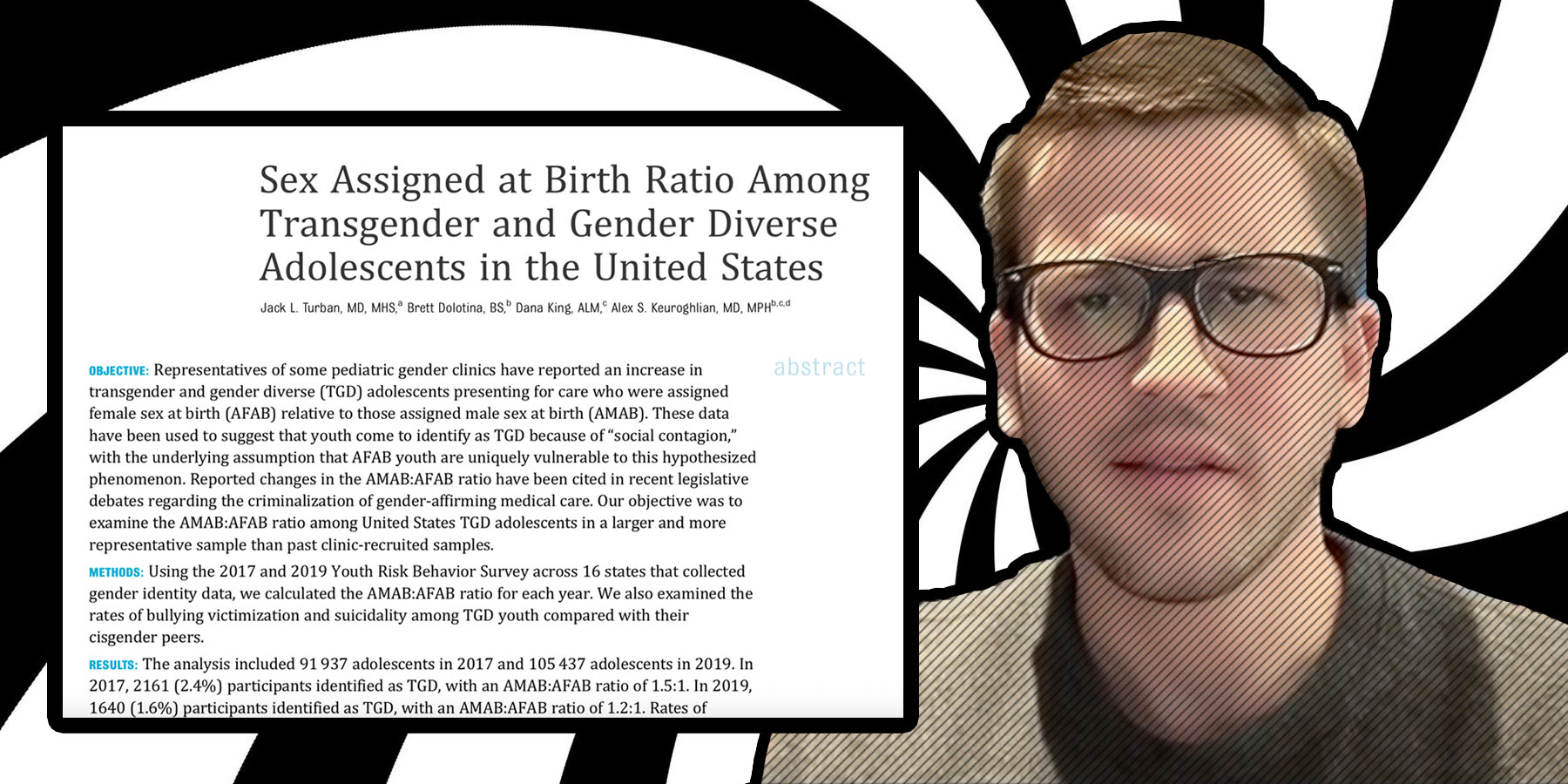 A new, error-riddled paper in the journal Pediatrics claiming that "social contagion" is not a factor in the dramatic rise in trans-identifying youth has been debunked by experts.

Jack Turban, a proponent of "gender affirming care" who perpetuates the affirm-or-suicide myth, is the study’s lead author. Turban, a trans activist and psychiatry fellow at UCSF, has a history of designing poor experiments and using bad methodology to draw erroneous conclusions from data.

Examples of his work’s many red flags have been well-documented by various publications such as Spectator World, Jesse Singal’s Substack, Medium, and even high-ranking academic journals.

Leor Sapir, a Fellow at the Manhattan Institute and researcher with a PhD in Political Science, calls the study "a new low" in his breakdown that identifies "major flaws" in Turban’s study.

Journalist Jesse Singal also published a review of the study on his Substack, where he called the study "genuinely worthless" and cited experts in the field of gender medicine critiquing the study’s many flaws. Singal tweeted about the study, "You guys know I am The Nuance Guy and try to avoid overheated language, but 'worthless' is apt here."

Sapir points out that Pediatrics is the same journal that published a thoroughly debunked 2018 article by Jason Rafferty that claimed to find conclusive evidence that alternatives to gender-affirming care are "futile and harmful."

But looking into the methodologies Turban deployed, Sapir and Singal found glaring red flags. The questionnaire asked students whether they self-identify as transgender, with a choice of four answers: yes, no, I don’t know, and I don’t understand the question.

Another huge red flag in the questionnaire asks respondents what their "sex" is, which Turban assumes to mean "sex assigned at birth" rather than "gender identity," but it is unclear how students understood the question. Sapir mentions that the researcher who developed the questionnaire for the CDC has herself admitted the "uncertainty as to whether transgender students responded to the sex question with their sex or gender identity."

"We simply cannot know how many of the respondents who ticked 'male' as their 'sex' are (biological) boys who identify as girls and vice versa," said Sapir.

Data supporting a strong predominance of girls identifying as transgender over boys has been well documented in internationally observed, peer-reviewed research that has remained steady over the past decade. Sapir found that Turban’s data was collected solely from the US, from less than one-third of states, and only focused only on two specific years. "Even if Turban is right about the ratios, a decline of girls relative to boys at gender clinics would not refute social contagion," he said.

"Turban and his colleagues made doubly broken claims about sex ratios among American trans youth," said Singal. "I say 'doubly broken' because there’s an issue both with how the question was asked and with the fact that the data is about as unrepresentative as can be. Either problem on its own would seriously threaten the validity of this research; combined, this is a disaster, and an embarrassment for Pediatrics," he added.

A commenter on Sapir’s article under the name Chris Brown summarized the study in a single sentence, "So this 'science' consists of giving multiple-choice questionnaires to teenagers, tabulating their answers, and mucking about with statistics on the results," adding, "What is it that we're supposed to 'know' after such a preposterous exercise?"