Antifa demonstrators placed a decapitated pig's head on an American flag outside the Justice Center in downtown Portland before putting a police hat on it and setting the whole thing on fire. 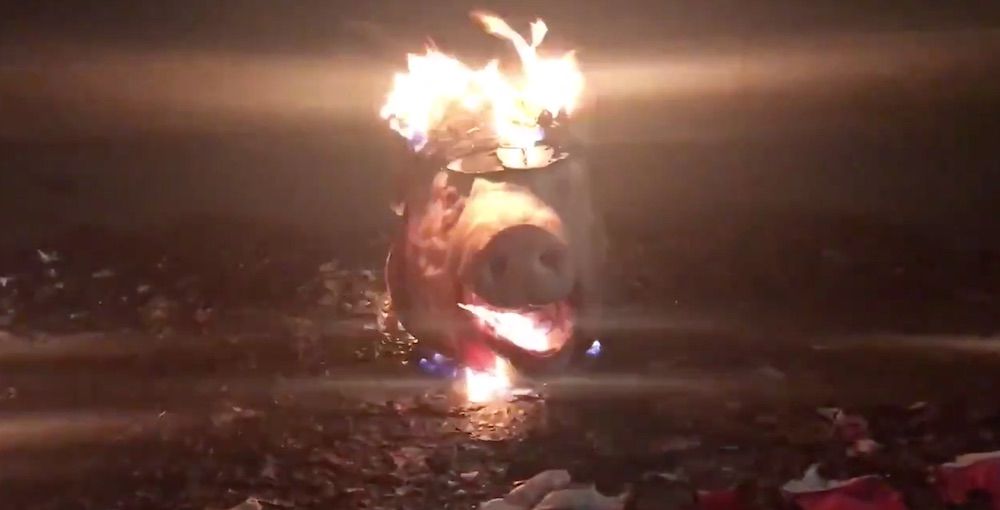 Antifa demonstrators placed a decapitated pig's head on an American flag outside the Justice Center in downtown Portland before putting a police hat on it and setting the whole thing on fire. Portland has seen over two months of nightly rioting.

Andy Ngo tweeted early Friday morning that "Antifa protesters dumped a bloody severed pig's head on an American flag outside the Justice Center in downtown Portland. They put a cop's hat on it and set all of it on fire."

Ngo added a second tweet, saying that in the early weeks of the riots "a pig was found abandoned near downtown Portland in the middle of the night," adding that "police rescued the animal. It is believed a protester was going to kill the pig as an act of anti-police protest but abandoned it last minute."

US Attorney Billy J. Williams, who has been the chief federal law enforcement official in Oregon for 5 years, said that the Portland riots are "pretty disgusting and unfortunately happening every night. This is just mindless violence and anyone who defends the violence is enabling this to continue so that's unfortunate, but it's a mess."

Williams added that there are opportunities to initiate change in this country following the death of George Floyd, but that "it's being held back by this," adding that "this is just mindless violence and it's been politicized and in my view that's what enables this to continue because no one in their right mind thinks this is okay."

While the Washington Post reported that the violence in Portland was caused by the presence of federal officers entering the area. Federal agents were sent to Portland to  stifle the violence and mayhem the city, which resulted in a number of crimes, including arson, vandalism, assault, and murder.