"I condemn violence against everyone, whether that is against police or against community members as a result of any person or government entity." 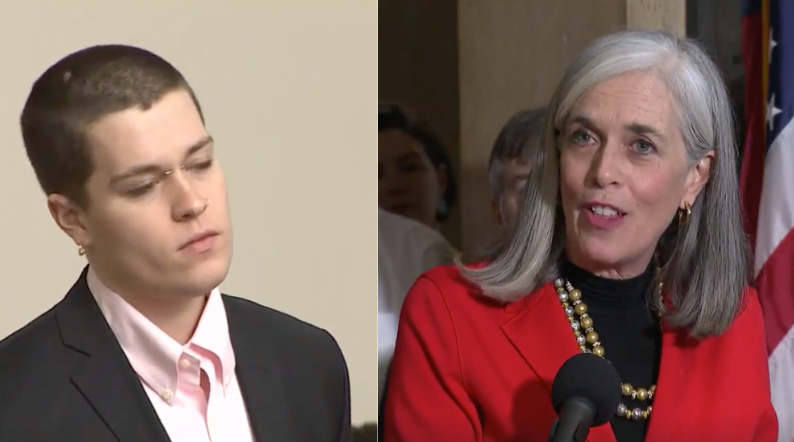 "I condemn violence against everyone, whether that is against police or against community members as a result of any person or government entity," Clark told reporters at a Boston-area environmental event.

Her child, Riley Dowell, was arraigned in Boston Municipal Court earlier in the day on charges of assault and battery on a police officer, vandalizing property, tagging property, vandalizing a historic marker/monument, and resisting arrest.

"I am going to refer to my statements that I’ve already released on this," Clark added at the Watertown, Massachusetts, event, where a sizeable federal grant was being announced for environmental efforts, including so-called "tree trenches."

"I love all my children and Riley dearly. But this is a difficult time in that cycle of joy and pain of being a parent," Clark added. "I have full trust in the legal system. This case is before it, and I have confidence that there will be an equitable and fair outcome."

Prosecutors said that Dowell flailed their arms as a police officer was trying to arrest the congresswoman's child, resulting in the officer bleeding from the nose and mouth. There were also incriminating items discovered in Dowell's backpack, including a spray paint can.

Pleas of not guilty were entered on Dowell's behalf, who could be seen in court sitting next to their father Rodney Dowell.

Clark has spoken about Dowell before, alleging that there have been instances of "bigotry targeting transgender people."

According to the Boston Police Department website, the suspect, whom they identified as Jared Dowell, could be seen tagging public property with anti-police slogans such as "NO COP CITY" and "ACAB."

Jared Dowell is also the name listed on court documents.

Dowell is due to appear back in court on April 19.