DeSantis LIVE from TPUSA's SAS: 'I want to wish the United States of America a speedy recovery from Biden'

"So you look t the divisions in our society, well maybe if people had a better understanding of American foundations, we wouldn’t be as divided as a people." 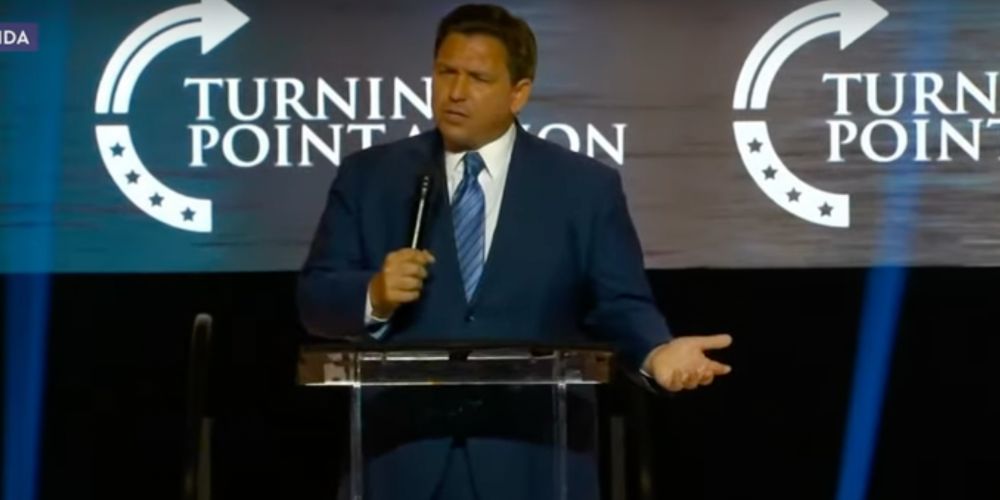 "In Florida, we lead on all the big issues of the day. We stood up over the last two years against the corporate media, against bureaucrats like Fauci, and against Brandon himself to keep the state of Florida open, to protect people's jobs to save businesses." DeSantis told the crowd in Tampa, Florida.

DeSantis continued by noting that the state has blocked Covid-19 vaccination requirements for school kids and workers, saying that "no Floridian should have to choose between the job that they need, and a shot they don’t want."

"We refuse to bow down to Lord Fauci by keeping our kids in school during the last few years. And if it had been up to the education unions and the Democrat party, the would not have been the case in Florida, just like kids were locked out of school all across this country," he said.

DeSantis then mocked mainstream media and lawmakers who couldn’t force the devastating effects on the education of children by virtual learning throughout the pandemic, noting that "we foresaw that in the state of Florida."

DeSantis continued on to slam Biden for his trillion dollar programs like the American Rescue Act that were passed, for relaxed laws allowing millions of illegal immigrants to flood across the border, and for declaring "war on American energy."

"Their war on American energy is hurting Americans of every race, color, creed, every income level, and it is helping to fuel the worst inflation that we’ve seen in over 40 years."

The governor did note that the state wished Biden a "speedy recovery" following his recent positive test results for Covid, but added that "I wish the United States of America a speedy recovery from Biden."

DeSantis later pivoted to take aim at liberal cities with progressive District Attorneys that are allowing crime to run rampant in the streets.

"You look around at these jurisdictions that are governed by leftist ideology and what do they do? How do they protect the people in these communities? They don’t protect them at all."

"They release criminals back onto the street," said DeSantis, noting the recent attempted stabbing of Republican New York Gubernatorial Candidate Lee Zeldin, whose attacker was released the next day without bail.

"You see, prosecutors that are funded by George Soros, they are not prosecuting cases," said DeSantis. "You could steal $999 worth of stuff and they just let you go. Along with that they will not bring a case."

"So what this is doing is it is destroying these societies because inmates are running the asylum, and I can tell you in the state of Florida, we are proud to be a law and order state."

Referencing the summer of 2020 riots that spread across the nation in the wake of George Floyd’s death, DeSantis said that at the time, "we said that’s not happening here," and the National Guard was called in.

"So we signed legislation to make sure in Florida, this is not going to be like Portland, where they will riot, they will get arrested, they take their mugshot, slap them on the wrist and put them right back on the street."

DeSantis continued on to say the root of everything happening in the country currently is woke ideology.

"This is, I think, a mind virus that is destroying any institution that it gets a hold of, and we see it and probably many of you see it in our education system."

DeSantis said that the state of Florida has drawn a "very clear line in the sand," and that "we’ve said that the purpose of our education system is to educate our kids, not indoctrinate our kids."

The Florida governor, who earlier this year signed the Parental Rights in Education bill into law, slammed critical race theory teachings in school, stating that the left wants to replace teachings on the founding of the nation with woke ideology.

"So you look t the divisions in our society, well maybe if people had a better understanding of American foundations, we wouldn’t be as divided as a people."

DeSantis continued on to slam Disney, saying that the corporation, which recently lost its special status in the state allowing self governance, is "going to pay their fair share of taxes."

He also noted that in the state, it has gone from more democrat voters, to over 200,000 more registered Republican voters.

In conclusion, DeSantis told the crowd to "get ready for battle," and that the upcoming election "is gonna be the time where America fought back."