"How often do you feel you have had to educate your child’s school about LGBTQ+ people and/or families?" (Photo: Beth Baisch) 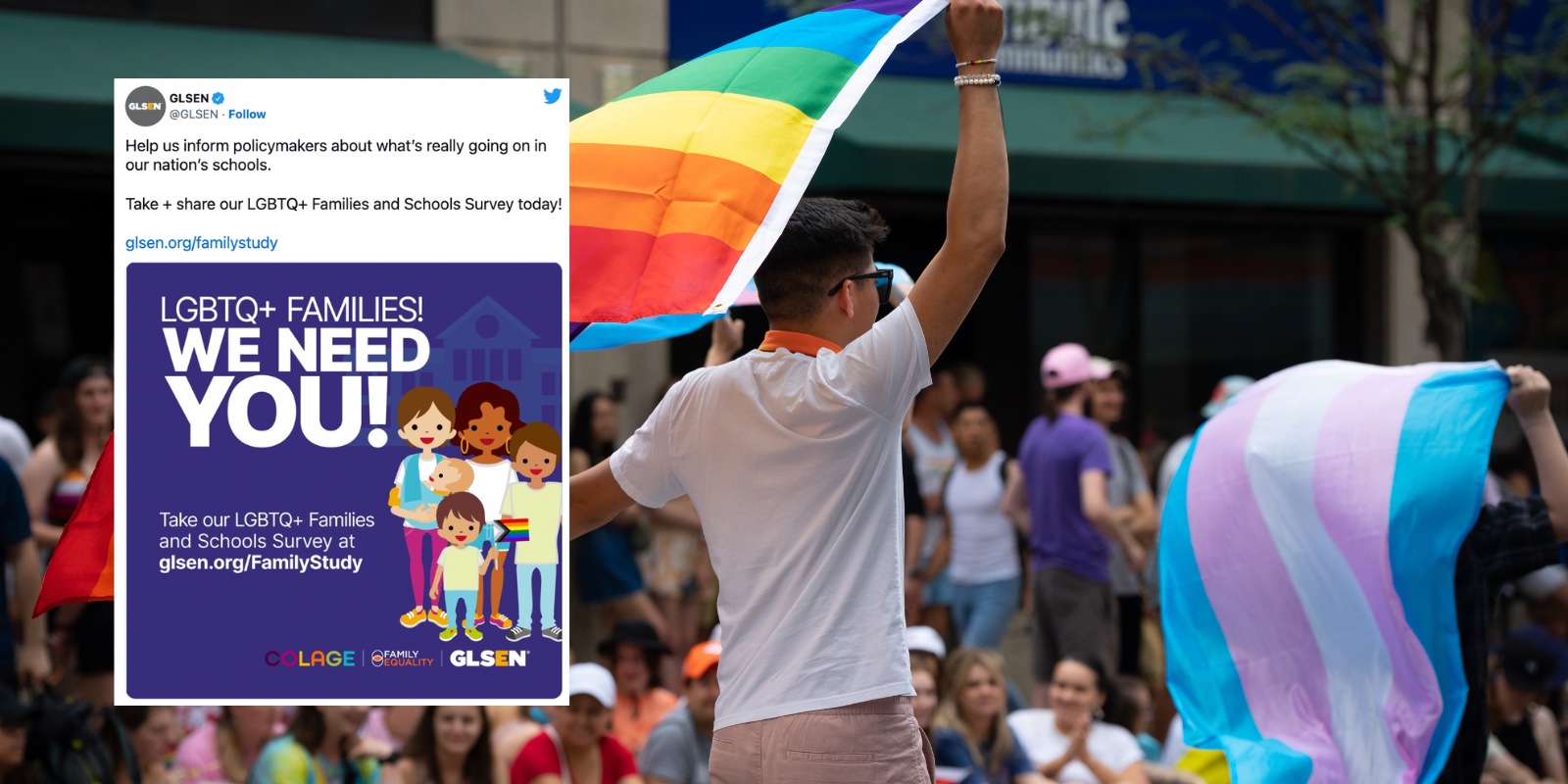 On Tuesday, GLSEN posted to Twitter a request for LGBTQ families to take a survey regarding schools and "help us inform policymakers about what’s really going on in our nation’s schools."

The survey is a joint effort between GLSEN, Family Equality, and COLAGE, all of which are organizations centered around LGBTQ students and families in the country. GLSEN is funded by Disney and Target, among others.

On GLSEN’s website, they request that parents, caregivers, and youth with at least one LGBTQ parent or caregiver participate in their "LGBTQ+ Families and Schools Study."

"The LGBTQ+ Families and Schools Study will be an important tool for fighting anti-LGBTQ+ bias in K-12 schools across the nation," GLSEN explained. "The information gathered from this survey will help GLSEN, Family Equality, and COLAGE to inform education policymakers and the public about the right of all students to be treated with respect in their schools."

GLSEN gives two different options for surveys, one for students, and one for parents and caretakers.

The student survey requests that middle or high school students over the age of 13, and who have at least one LGBTQ parent or caretaker, "tell us about your experiences in school."

Parents of children at all grade levels and identify as LGBTQ are requested to "tell us about your experiences with your child’s or children’s school."

In both cases, the surveys are anonymous, and survey takers will be entered to win one of 20 $50 e-gift cards.

In the students survey, it prefaces a portion of its questions with a disclaimer that "The first several questions are about language that you may have heard in school which you may find offensive or upsetting."

This section asks students how frequently they hear phrases like "no homo," homophobic remarks, or "gay" used in a derogatory manner. It asks whether students or teachers are the ones saying it, and whether these phrases "bother" the student.

It also asks whether the student has heard comments about another student not acting "feminine" or "masculine’ enough, whether these comments came from a student or teacher, and whether anything was done to intervene in the conversation.

The survey asks students if they’ve heard racist, sexist, "negative remarks about other students’ ability," or remarks regarding a student’s immigration status.

Students are also asked if they missed school due to both reasons related to Covid-19, or other reasons, and whether they’ve had to change schools because they felt unsafe or "uncomfortable."

The survey provides a list of reasons why a student may have felt "uncomfortable" at their previous school, including their sexual orientation or gender, how the student expresses their gender, the student body size, the student’s academic ability, and also provides a box to type in your own reason.

Students are asked whether they have received harassment or negative comments regarding their LGBTQ parent, or comments on their living situation such as having a single mother, being adopted, or living with grandparents.

The survey also asks "How often do you feel you have had to educate your child’s school about LGBTQ+ people and/or families?"

The survey, which hopes to "inform education policymakers and the public about what’s really going on in our nation’s schools" regarding LGBTQ families takes aim at legislation passed in states regarding LGBTQ topics in the classroom.

The surveys asks about these topics both in the classroom, as well as in regards to clubs like GSA.

Earlier this year, Florida passed its Parental Rights in Education bill, which amongst other issues, seeks to prevent teachings on gender identity and sexual orientation in grades three and below.

The bill has come under fire, with opponents calling it the "Don't Say Gay Bill," despite the legislation containing no such phrases or sentiments. GLSEN lashed out at Disney for its silent complicity with the bill.