"Corporate statements do very little to change outcomes or minds. Instead, they are often weaponized by one side or the other to further divide and inflame," the Disney CEO said. 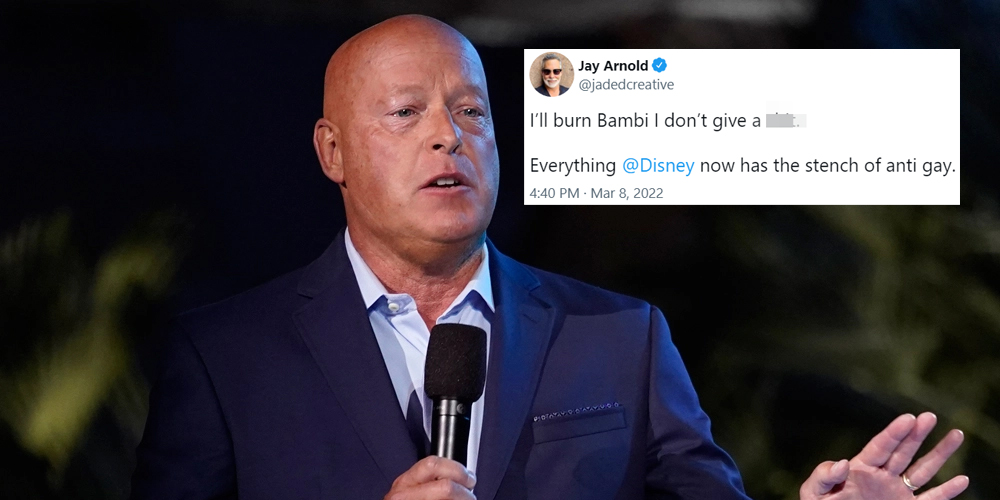 Update: Disney has since expressed their displeasure with the anti-grooming bill.

Florida's Senate approved the anti-grooming bill HB 1557 which on paper says its aim is to improve parental rights in the public education system. But Disney finds themselves facing controversy because they didn't disavow the bill, largely due to the "Don't Say Gay" moniker attached to the bill by its left-wing opponents.

Despite the bill curtailing sexual content for minors in grades pre-K through third grade, activists say Disney's indecision shows a tacit approval for what they believe to be "bigotry" and suppressing the LGBTQ+ movement as a whole.

Hollywood director Judd Apatow chimed in to characterize Disney's consumer base being largely children, and to describe what Florida did in passing HB 1557 on Tuesday as an affront to all of them.

"As we have seen time and again, corporate statements do very little to change outcomes or minds. Instead, they are often weaponized by one side or the other to further divide and inflame. Simply put, they can be counterproductive and undermine more effective ways to achieve change," the Disney executive said in his message about a lack of a statement on the matter.

A full copy of the memo was posted by the Los Angeles Times. Judd Legum of Popular Information takes snippets of the memo while adding personal commentary to do the very thing the Disney CEO said he wanted to avoid.

For starters, the Chapek memo mentions how Disney owns ABC and acknowledges the outlet's work in Ukraine. But last Friday, the Disney head met with "a small group of Disney LGBTQ+" employees about the parental rights bill in Florida that opponents dubbed "Don't Say Gay" given one specific section about exposing students in pre-K through third grade to sexualized content.

All the meanwhile, Chapek said he took the time to hear the concerns brought forward by staffers. He also doubled down on his support for the LGBTQ+ section of the company overall, who were the ones disappointed that Disney as a corporation didn't disavow HB 1557.

The Disney CEO made clear his sense of distinction about different tactics towards similar goals, and he told employees he believes the best way to that goal is through the company's content. To put it another way: Chapek wants to avoid Disney becoming a pawn in a political football game.

"Encanto, Black Panther, Pose, Reservation Dogs, Coco, Soul, Modern Family, Shang-Chi, Summer of Soul, Love, Victor. These and all of our diverse stories are our corporate statements — and they are more powerful than any tweet or lobbying effort. I firmly believe that our ability to tell such stories — and have them received with open eyes, ears, and hearts — would be diminished if our company were to become a political football in any debate," Chapek wrote.

When it comes to the topic of Disney's political contributions, Chapek says the company's new Chief Corporate Affairs Officer, Geoff Morrel, is expected to soon be "reassessing our advocacy strategies around the world — including political giving — as he begins to integrate the communications, public policy, government relations and CSR teams."

Some were not impressed. Dana Terrace, creator of "The Owl House," responded by accusing Disney of hiding behind "flowery and compassionate words" with their internal response.

Florida Governor Ron DeSantis on Monday clarified what the specific "Don’t Say Gay" aspect of HB 1557 was about.

The specific part of the bill that caused outrage was: "Classroom instruction by school personnel or third parties on sexual orientation or gender identity may not occur in kindergarten through grade 3 or in a manner that is not age-appropriated or developmentally appropriate for students in accordance with state standards."

However, the majority of HB 1557 actually focuses on empowering parents with regards to communications from educators about the goings-on within the classroom.

The blowback from Twitter activists largely centered around the donations aspect of the memo.