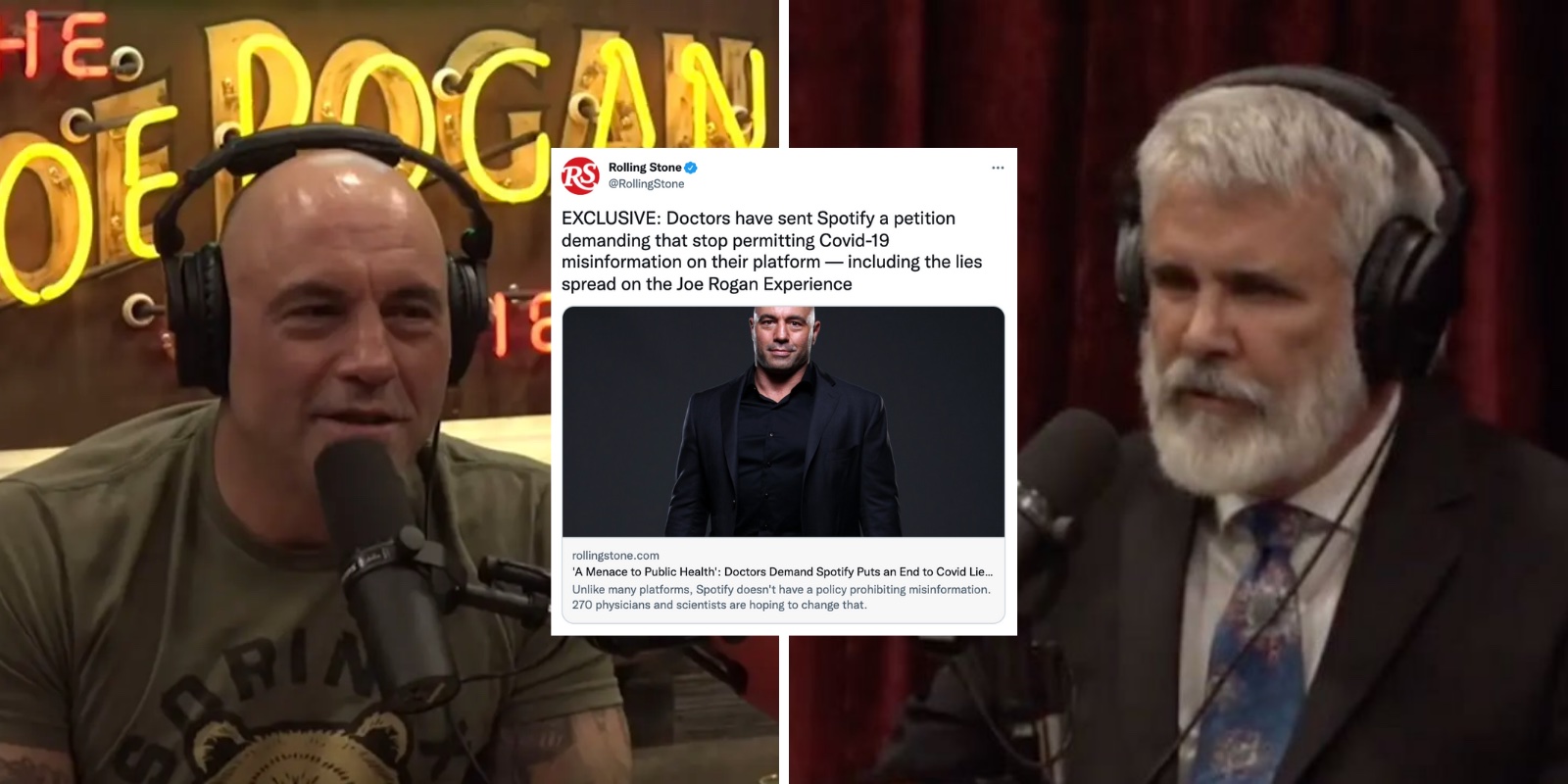 Backlash against Joe Rogan for hosting Dr. Robert Malone on his podcast has now taken the form of nearly 300 doctors penning a letter to podcast hosting platform Spotify to stop Rogan from spreading "misinformation."

Rolling Stone jumped aboard the demand for Spotify to censor Rogan and others. This after they spread a false story that hospitals were filling up with patients overdosing on ivermectin.

The doctors, and Rolling Stone, implore Spotify to not allow this kind of information to continue to be disseminated on their platform. They would prefer that Spotify censor those podcasters that medical and scientific experts do not think are a boon to their industry.

Rolling Stone spoke to some of the doctors who signed their name to the letter, including Jessica Malaty Rivera, who has a large Instagram account, where she posts segments of herself talking favorably about the Biden administration's policies for COVID, pictures of kids with cardboard cutouts of Dr. Fauci while showing off their vaccine cards, and promotes masking, social distancing, booster shots, and "bio-surveillance."

"Considering their role in society is disseminating content," Rivera said, "there is a responsibility in a global public health emergency to not exacerbate the problem. We have an infodemic going on that is prolonging the pandemic and it is causing people to make bad choices and actually die. These are preventable illnesses that folks like Joe Rogan and Dr. Robert Malone are directly responsible for."

The group of doctors and scientists wrote an "Open Letter to Spotify: A call from the global scientific and medical communities to implement a misinformation policy."

That letter claimed that the episode of The Joe Rogan Experience featuring Dr. Robert Malone was "highly controversial," and "has been criticized for promoting baseless conspiracy theories," and went on to say that the podcast has "a concerning history of broadcasting misinformation, particularly regarding the COVID-19 pandemic." They cite Media Matters to bolster this claim.

Rolling Stone spoke to Katrine Wallace, as well, an epidemiologist at University of Illinois Chicago School of Public Health. Wallace said Rogan is "a menace to public health."

"Having things like this on the Joe Rogan podcast gives a platform to these people and makes it a false balance. This is what really bothers me," Wallace said. "These are fringe ideas not backed in science, and having it on a huge platform makes it seem there are two sides to this issue. And there are really not. The overwhelming evidence is the vaccine works, and it is safe."

"Misinformation", of course, is anything that questions, opposes, or counters the medical industry and Democrat party phalanx of approved information about the pandemic. This despite that information being in constant flux, from their original statements regarding masking being not necessary to it being mandated, from claims that the virus was naturally occurring to the growing acceptance of the idea that it was lab-made.

The experts who signed the letter claim that by allowing Rogan's podcast episode with Malone to remain up, "Spotify is enabling its hosted media to damage public trust in scientific research and sow doubt in the credibility of data-driven guidance offered by medical professionals." They say that this episode from Rogan is "not the only transgression" on Spotify's platform, but that it shows Spotify's "failure to mitigate the damage it is causing." In other words, Spotify, which allows podcaster the freedom of speech to explore ideas and concepts as they wish, is liable for the speech of those podcasters.

"Though Spotify has a responsibility to mitigate the spread of misinformation on its platform, the company presently has no misinformation policy," they write, before going on to slam Rogan for daring to question medical narratives some more.

"Joe Rogan has repeatedly spread misleading and false claims on his podcast, provoking distrust in science and medicine," they write. They bring up his use of ivermectin, as well as Malone's discussion of "mass formation psychosis," which was "fact-checked" by an "expert" for the AP who despite saying that it doesn't exist, has published work very similar to what Malone was talking about.

The experts take issue with Rogan's having spoken about young people being at very low risk for COVID, though CDC data supports that claim. In the age group Rogan was discussing, early 20s, only 2,634 individuals died from COVID without pneumonia, and of those, the CDC does not provide information on how many of those people suffered from additional comorbidities. They claim that Rogan's exploration of alternative ideas is "medically and culturally dangerous."

The doctors also cite statistics that show that "unvaccinated 12-34 year olds are 12 times more likely to be hospitalized with COVID than those who are fully vaccinated." In so doing, they make a similar mistake to one made by Supreme Court Justice Sonia Sotomayor, who claimed, based on misleading headlines, that hospitals are essentially full of unvaccinated children with COVID cases. In fact, this was debunked by both CDC director Dr. Rochelle Walensky and Biden's COVID spokesman Dr. Anthony Fauci, who both stated that children who are admitted for other causes are then tested for COVID, and many are found to be positive. This does not mean they are suffering ill-effects of the virus, or that it is the reason for their admittance to a hospital

"Mass-misinformation events of this scale have extraordinarily dangerous ramifications," they write. "As scientists, we face backlash and resistance as the public grows to distrust our research and expertise. As educators and science communicators, we are tasked with repairing the public’s damaged understanding of science and medicine. As physicians, we bear the arduous weight of a pandemic that has stretched our medical systems to their limits and only stands to be exacerbated by the anti-vaccination sentiment woven into this and other episodes of Rogan’s podcast."

In a statement to the Verge, Rolling Stone reports, Spotify said "Spotify prohibits content on the platform which promotes dangerous false, deceptive, or misleading content about Covid-19 that may cause offline harm and/or pose a direct threat to public health. When content that violates this standard is identified it is removed from the platform."

Rolling Stone slammed Spotify, saying "it has been reluctant to take action against Rogan’s podcast, which reaches an estimated 11 million people per episode; nor does it include a warning label regarding potential misinformation on any podcast episodes."

The episode with Rogan and Malone, posted New Year's Eve, was one of the most listened to episodes of Rogan's podcasting history, and it was pulled from YouTube shortly after it aired.