Don’t come to Brazil: how the Dead Kennedys pissed off every Brazilian

Right-wing politics have always been the target of The Dead Kennedy’s message. Unfortunately for the band, someone at the DK camp decided to stick their nose where it didn’t belong. 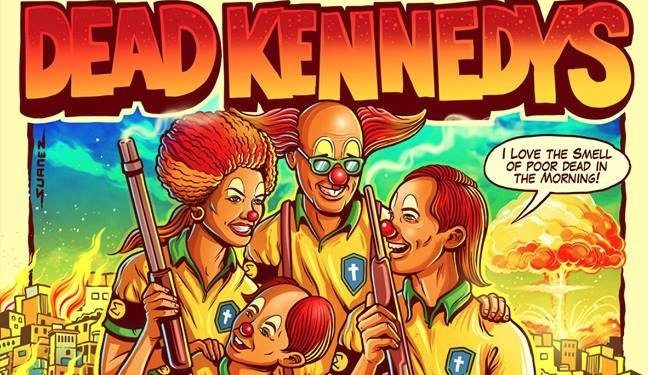 Edit: This article has been updated for inaccuracies about the former Brazilian government

Do you remember that old punk classic, “I’m so sorry I offended you, it wasn’t my intention”? Neither do I, but it looks to be a tune the Dead Kennedys are singing nowadays.

The Dead Kennedys are one of America’s finest rock bands. The punk legends—who have remained relevant for 40 years—are a testament to controversial, politically-minded music. Not shying away from their beliefs, the Dead Kennedys have released songs criticizing capitalism, corporate America, environmental policies, and heads of states.

As natives of the San Fransisco area, criticizing American politicians is considered fair game. Their massive 1979 single California Uber Alles directly satirized and attacked then-Governor of California Jerry Brown, comparing his political career to those of politicians in the German Third Reich.

The song’s title is a direct reference to a line in the German national anthem pre-1945, “Deutschland Uber Alles” (meaning Germany above everything) a line that was removed after 1945 due to its association with Nazism.

Right-wing politics have always been the target of the Dead Kennedys’ message. Regrettably, for the band, someone at the DK camp decided to stick their nose where it didn’t belong.

With the Dead Kennedys celebrating 40 years of bandhood, the group released a poster with dates for their upcoming Brazilian tour. The poster, which features burning favelas, tanks boasting Swastika-esque dollar sign flags, and clowns wearing altered Brazilian soccer shirts holding rifles, probably seemed like a good idea at the time.

A speech bubble coming from one of the clown’s mouthes states, “I love the smell of poor dead in the morning.” The line is both a reference to the 1979 classic Apocalypse Now, as well as their own song, “Kill the Poor.”

The depiction of a clown-faced family is a reference to supporters of the newly democratically elected Brazilian President Jair Bolsonaro. Bolsonaro is frequently given the nickname “Bozonaro” by those on the Brazilian left, typically while painting his face in clown make up a-la Bozo the Clown.

Brazil’s politics are complicated, to say the least. After 15 years of corrupt governments which many felt had ruined the country, Brazilians opted to elect Jair Bolsonaro in the 2018 general election.

Bolsonaro won the vote in a tight race that saw over 57 million voters hit the booths in the second round. The world collectively lost their cool, as American media outlets were quick to point out the past evils of Bolsonaro, including his inflammatory statements and harmful rhetoric against the LGBT community.

The DK camp then had an easy target, and so they shot. But unfortunately for the Kennedys, they overlooked one important factor: Bolsonaro won the popular vote and won a very legitimate election. Though Bolsonaro was problematic by his own right, he was still chosen to be the leader of the world’s 5th most populous nation.

To put it lightly, comment sections were not happy. Large portions collectively voiced their displeasure, with many requesting the Kennedys “don’t come to Brazil.” Some stated that the Dead Kennedy’s did not understand the situation in Brazil, with many saying they had no choice but to vote for the controversial politician.

One commenter stated that “[Bolsonaro] deserves every word of criticism he gets, but accusing people who voted for him out of spite for the opposing party of being “fascists” and ‘loving the smell of dead poor in the morning’ is absolutely ignorant and disrespectful to the majority of the population who were just fed up with corruption and wanted change.”

So, on the Dead Kennedys went, releasing a statement regarding the controversy.

DEAD KENNEDYS OFFICIAL PRESS RELEASE
It has come to the attention of Dead Kennedys that a poster has been released promoting the band’s upcoming shows in Brazil.
This poster was released by the promoter of the shows without the knowledge of Dead Kennedys and is unauthorized. Dead Kennedys is an iconic American punk band who is known for its political statements and takes a strong anti-fascist, anti-violence stance
However, the band feels it cannot presume to know enough about situations in other countries to wade into their specific politics. The poster just released does not reflect a political statement or position of Dead Kennedys.
The band’s basic message has been, and still is, to ask people to think for themselves, not to tell them what to think.”

So that should be it, right? A minor blunder at the hands of the Kennedys that was quickly picked up and corrected. No big deal! But the Kennedys decided to dig themselves an even deeper grave and delete the post.

Many were quick to call out hypocrisy. “You guys do not know about Brazilian politics to get involved? They support Trump administration. End of explanation.”

“Is Holiday in Cambodia out of the setlist?” asked one commenter, noting that the Dead Kennedys had never been afraid of criticizing other country’s world leaders, like genocidal maniac Pol Pot, in the past.

The poster, created by artist Cristiano Suarez, has put the band in a particular type of PR pickle. It is usually difficult to insult 100 percent of a fanbase, but the Kennedy’s did it quite gracefully, and with ease!

With the Kennedys’ four tour dates coming up in a months time, the band surely has their fingers crossed that the entire ordeal will simply fade from the public conscience, as it most likely will. At the time of writing this article, there only four tickets left for the Kennedys’ Rio de Janeiro show, at an average of ~C$92 on viagogo.com.

What does this say about the spirit of punk? Since when was offending people such a touchy matter to the world of punk rock? As a band, the Kennedy’s are coming up on 40 years as a group. But the Dead Kennedys, sorrowfully, look deader than ever.

The Dead Kennedys made international headlines in the ‘80s during a massive obscenity trial that involved a graphic depiction of genitals in an H.R. Giger painting titled “Penis Landscape” (warning: 18+.) The use of the artwork caused a media frenzy surrounding the newly formed Parents Music Resource Center (PMRC).

In December of 1985, a teenaged girl bought the album. The girl’s mother wrote letters of complaint to the California Attorney General and to Los Angeles prosecutors. In 1986, the Kennedys were charged criminally with the distribution of harmful matter to minors, an infamous moment of moral panic that we could all learn from today.

The band won, and Jello Biafra, the singer of the band, gained attention as a champion of free speech. Biafra has since left the band, and very evidently, took the wind under the band’s wings along with him.

The spirit of those Kennedys has died. Apologies, capitulation, and sad old rockers are all that remain of the once feisty band. If the Kennedys had just stood by their guns, the poster would have just been a jab at a right-wing government, a very on-brand move for the Kennedy’s. But dismally, it looks like those days have far passed.