"We’re in an environment where evil is called good and good is called evil. Where it seems like that parents are co-parenting with the government and that’s just not the way it should be," Mastriano said. 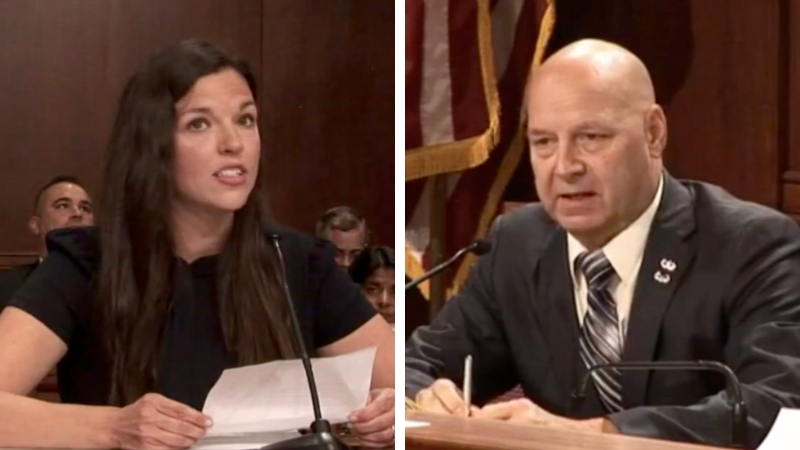 Pennsylvania lawmakers held a hearing on Tuesday regarding Doug Mastriano's proposed "Parental Bill of Rights," a bill that could give parents more direct say in the content taught in schools. Senate Bill 996 was introduced at the end of 2021 by State Sen. Doug Mastriano, who is running on then GOP ticket for Pennsylvania governor.

Supporters of the legislation said the bill is needed due to critical race theory being taught in schools, inappropriate books being included in curriculum and libraries, and because students are allowed to use the bathrooms associated with their gender identity rather than biological sex.

"The liberty of a parent to direct the upbringing, education, care, and welfare of the parent's child is a fundamental right. Neither a Commonwealth agency nor a non-Commonwealth agency may infringe upon the right under subsection (a) without demonstrating that the law or ordinance is narrowly tailored to meet a compelling governmental interest by the least restrictive means," the bill reads.

"Pronoun games have no place in schools. This has to end. Madness has come in. Parents have the least say. We're looking at education and not indoctrination," Mastriano said.

"We're in an environment where evil is called good and good is called evil. Where it seems like that parents are co-parenting with the government and that's just not the way it should be," Mastriano added.

Fenicia Redman, who filed a lawsuit in September to have schools in a Chester County school district remove inappropriate books, told FOX43 regarding the legislation, "I'd like to legally be able to say to the school district that having books with pedophilia or sexually explicit material is out." During the hearing, Redman read content from the books, which included multiple expletives as well as pornographic content, out loud but was asked to stop by the chairman.

Maria Ault, a Lehigh County mom, asked during the hearing, "Why doesn't the school acknowledge that a girl has a right to feel uncomfortable in a restroom or changing in a locker room in front of a boy."


Pennsylvania mother Megan Brock from Bucks County told how she was labelled a domestic terrorist and faced legal action from the Bucks County Board of Commissioners for advocating for her children in a powerful speech before a State Committee hearing on parental rights Tuesday. "We've been labeled domestic terrorists for speaking at school board meetings, we've had defamatory statements printed about us in the newspaper, we've been ridiculed and called countless names."

Brock, who had no previous experience with political advocacy, was propelled into action in August 2020 when Bucks County Superintendent Dr. John Kopicki announced that students would be starting the school year with virtual learning.

Brock and her fellow parental rights advocate, Jamie Walker, began submitting public records requests to learn how this decision was made, which resulted in a total of five lawsuits being filed against the two women by Bucks County Commissioners.

"We want there to be truth, transparency, and accountability," she went on. "Parents need to be able to make decisions that are in the best interest of their children. But instead of receiving answers to our questions, our Buck's County Commissioners have used their elected positions to call us liars, conspiracy theorists and accuse us of playing politics."

"We've been ridiculed and called countless names…it should not take this much effort for parents to exercise the fundamental rights of being their child's advocate."

Brock highlighted a further attack on parental rights which comes in the form of a federal complaint filed by the ACLU against the Central Bucks School District alleging discrimination against LGBTQ students following the recent guidance requiring teachers to obtain parental consent before using a student's new name and pronouns.

Brock told of how several Central Bucks teachers have refused to comply with this new guidance and continue to hide a student's self-declared gender identity from parents.

"As a mother, I've always taught my children to never keep secrets from me," Brock told the committee. "And if an adult ever asked them to keep a secret, they need to tell me because it's a well-established fact that safe adults don't keep secrets with children.

Brock also explained to the committee how socially transitioning a child is a form of "gender-affirming care" which often leads to more invasive medical interventions such as testosterone injections and bilateral mastectomies on girls as young as 14.

"A 14-year-old girl does not have the ability to consent to forever losing her ability to be a mother," said Brock, before detailing the other ways gender dysphoria can be treated.

She referred to a testimony given by Dr Steven Levine in March 2020 in which the psychiatrist with decades of experience treating individuals with gender dysphoria testified to the effectiveness of watchful waiting and psychotherapeutic support for gender dysphoric youth which in the past resulted in the vast majority of young people getting over their gender discomfort and averting the need for a lifetime of medical intervention.

"I find it extremely alarming that our Attorney General Josh Shapiro wants to ban children struggling with gender dysphoria from receiving any alternative treatments other than gender-affirming care," she said, citing Shapiro's promise to ban conversion therapy for minors, which includes gender identity in its defintion. "How can anyone force parents into a care model that gives children highly invasive and irreversible fertility ending treatments when there are less invasive options with proven positive results," she asked.

Brock concluded by thanking Senator Doug Mastriano for sponsoring SB 996. If the bill were to pass in the few remaining days of the legislative session, Democrat Pennsylvania Governor Tom Wolf would likely veto it. Other states including Arizona and Florida, have enacted similar measures to expand parents' rights in schools.