At least 130 Seattle businesses have permanently closed and about 47,000 jobs were lost in the downtown area in the first half of the year. 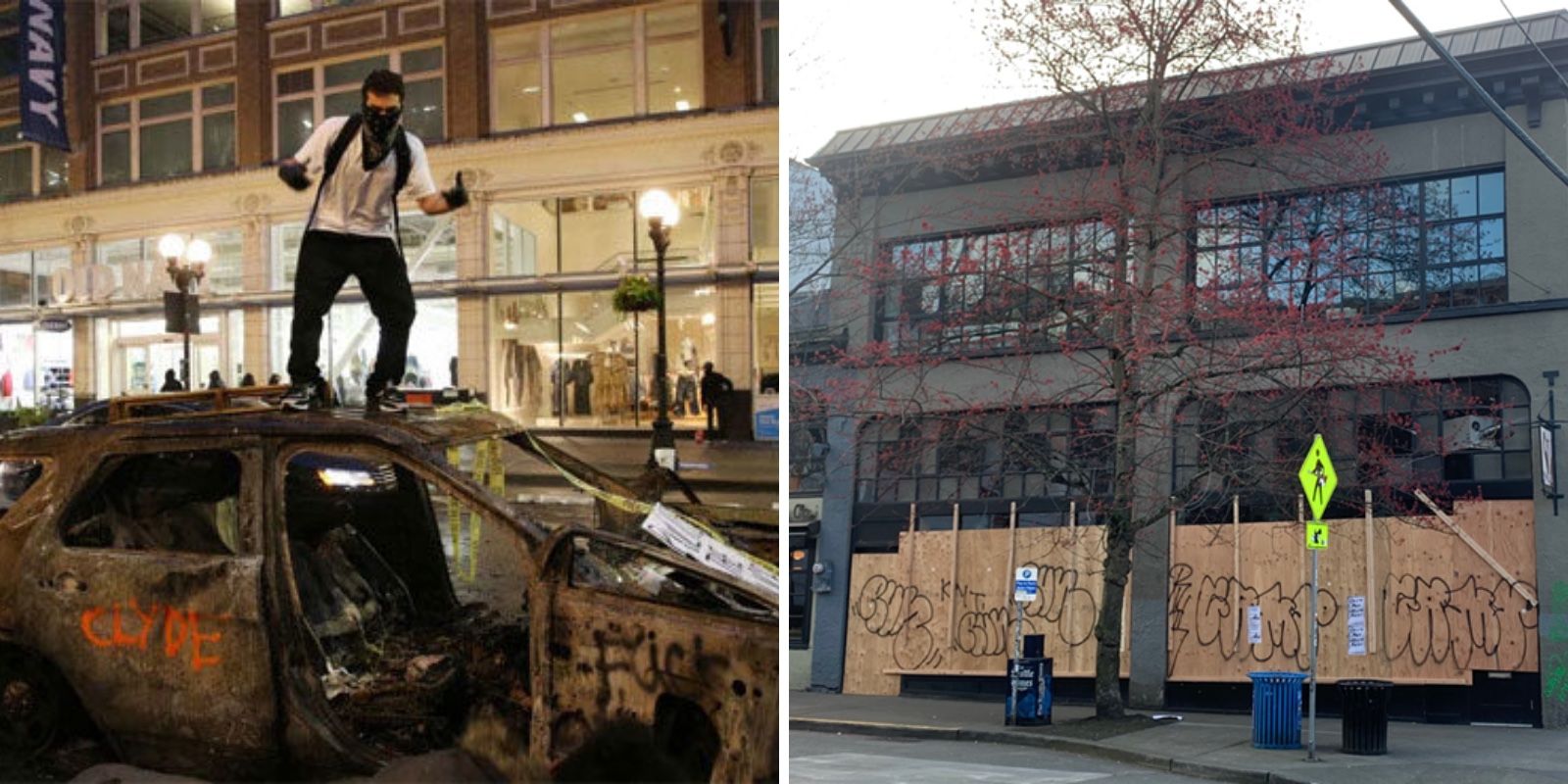 New data from the Downtown Seattle Association (DSA) says that over 100 businesses have closed or relocated out of downtown Seattle due to the effects of coronavirus shutdowns, rising taxes, crime, riots and city mismanagement.

According to the DSA report, at least 130 Seattle businesses have permanently closed and about 47,000 jobs were lost in the downtown area in the first half of the year.

Across the region, approximately 1,300 business have closed, including the more than 100 in Seattle. Many big name retailers like Macy's, Starbucks, Bartell's, J Crew, and Abercrombie, to name a few, have closed their downtown Seattle locations. Well known chefs like Tom Douglas have closed their Seattle locations. Douglas told King 5 News "There's no cruise ships to save us. There's no hotel people, there's very few tourists to save us. We as a community have to decide that we want to bring the market back."

Scott Miller who lives downtown, also told KIRO 7 that "The whole makeup of downtown in the six years I’ve been here has changed so much."

The DSA says that Seattle built itself to rely on conventions, events, businesses and travel, so the pandemic is hitting the area especially hard. DSA officials say COVID-19 and plummeting foot traffic have only made existing problems worse, including shoplifting and the cost of paying for security. This has had a devastating impact on restaurants, clubs, bars and retail.

Kress IGA at Third and Pike, the only full service grocery store remaining in downtown Seattle closed on Friday. Kress opened in 2008 and catered to office workers, residents, and tourists in the basement of the old Kress building.

The grocer told Kiro 7 that "the economic, social, and political issues associated with doing business in the city of Seattle are ultimately the reasons for closing." The more than 30 employees who worked there were offered positions at other locations, are now receiving unemployment, or are looking for new jobs.

Meanwhile Washington Governor Jay Inslee put a freeze on phased reopening until the end of July, which has still not been lifted, raising more questions about how restaurants and businesses will survive.

Jason Shakelford, owner of one of the most well known auto shops in the area, made the decision to close his Seattle location and consolidate his operations to the nearby city of Redmond in December. Shakelford opened Stingray Auto in 2009 while the economy had still not recovered from the 2008 economic collapse.

"The first several months were really really rocky" said Shakelford. "We were unknown… sometime around august of 2010 I had a customer come into my office, her name was Marie and she wanted an oil change… Marie said I work for a small internet company and I would like to represent you." Marie pitched him on $15 oil changes.

Shakelford figured that if he could get 30 or 40 customers off the add that would be 30-40 new customers who would not have known Stingray otherwise. That same day Jason's wife who was doing the books for Stingray, through tears told him they did not have enough money to make it through the month and if they didn't do something.

Little did Shakelford know but the startup Marie worked at was Groupon.

Two weeks later, Stingray became the first auto shop in the country to do $15 oil changes with Groupon. Shakelford admits he had forgotten about Marie, but in the first 24 hours the campaign ran, Stingray sold 3,840 oil changes. The phone was ringing off the hook.

"From that minute on we were known" said Shakelford. "We were booked 3 weeks out…we were booked every half hour and we have been since that moment."

Within three months Stingray had gone from minimal staff and equipment and barely able to afford rent to needing to hire three additional mechanics.

"We were doing interview on NPR, we were running (commercials) on the Walking Dead, Pawn Stars, nothing could hurt us. Everything was awesome until the city of Seattle intervened with their project on the (Highway) 99 tunnel."

Even though the Department of Transporation claimed in letters that Stingray was in a "non effected work zone" Shakelford compares it to having a grenade explode two feet from your head and someone claiming that they weren't throwing it at you.

Traffic was rerouted away from Stingray, streets access was closed for days which became weeks which turned into months then years. Access for tow trucks and vehicles was closed off with no warning with new sidewalks and street lights. No compensation was offered. From 2016 things got really bad. "Our building was shaking so bad from the concrete (work) I had to switch my staff from shop to shop just to keep them from quitting."

Jason remained optimistic even though his wife and employees were warning that the situation was untenable.

"They put a bus stop in front of my shop and even before the concrete dried there were homeless people sleeping under this ginormous escapade of a bus stop. The city installed garbage cans, on the first day…somehow were full and strewn across the street."

Shakelford elaborated that about 2-3 years before all this, with all the encampments and tent cities in the neighborhood "…I had to go into work and an hour or two hours early everyday, to clean up heroin needles and urine and feces out of my parking lot. Every single day because I didn't want my staff to have to do it." Cars were broken into on the lot.

"City leaders have ruined our city… I would have a lot of people wander into my shop that were either mentally ill or on drugs that were looking for anything… they got violent with us. I had to call 911… but their hands were tied… I had to 'open carry'."

Crime and homelessness have been increasing in Seattle for years. Rather than offer more resources to the Police Department to address the problems, the Seattle City Council voted to cut over 100 officers from the force, including the Navigation Team that offers services to the people living on the streets.

Shakelford continued "I had nothing and grew it into a multi-million dollar business and the only thing that could affect us was the city council and the city of Seattle."

Shakelford wants to come back to Seattle for his customers but the ongoing violence in Seattle's core has given him another reason to stay away. "Everyone has the right to protest, but what is going on in Seattle now is not protests, it's riots and that's violence. I can't come back to that." The council has failed to condemn and in some cases even supported vandalism and arson against businesses.

The DSA says that the easiest way to help the businesses is to support them, because without the big conventions the city is used to hosting downtown, they’re forced to rely on local customers. The DSA is currently running a social media marketing campaign to help drive customers to the affected businesses. However, with big tech employees like Amazon working from home through the end of the year, residents and businesses moving out of the downtown area because of crime, violence and rising costs, the approach is unlikely to succeed.