Antifa rioters made lists of Seattle businesses to destroy

On July 22, over 150 rioters took to the streets of Capital Hill in Seattle, doing "massive amounts of property damage, looting, shooting fireworks, and committing arson." 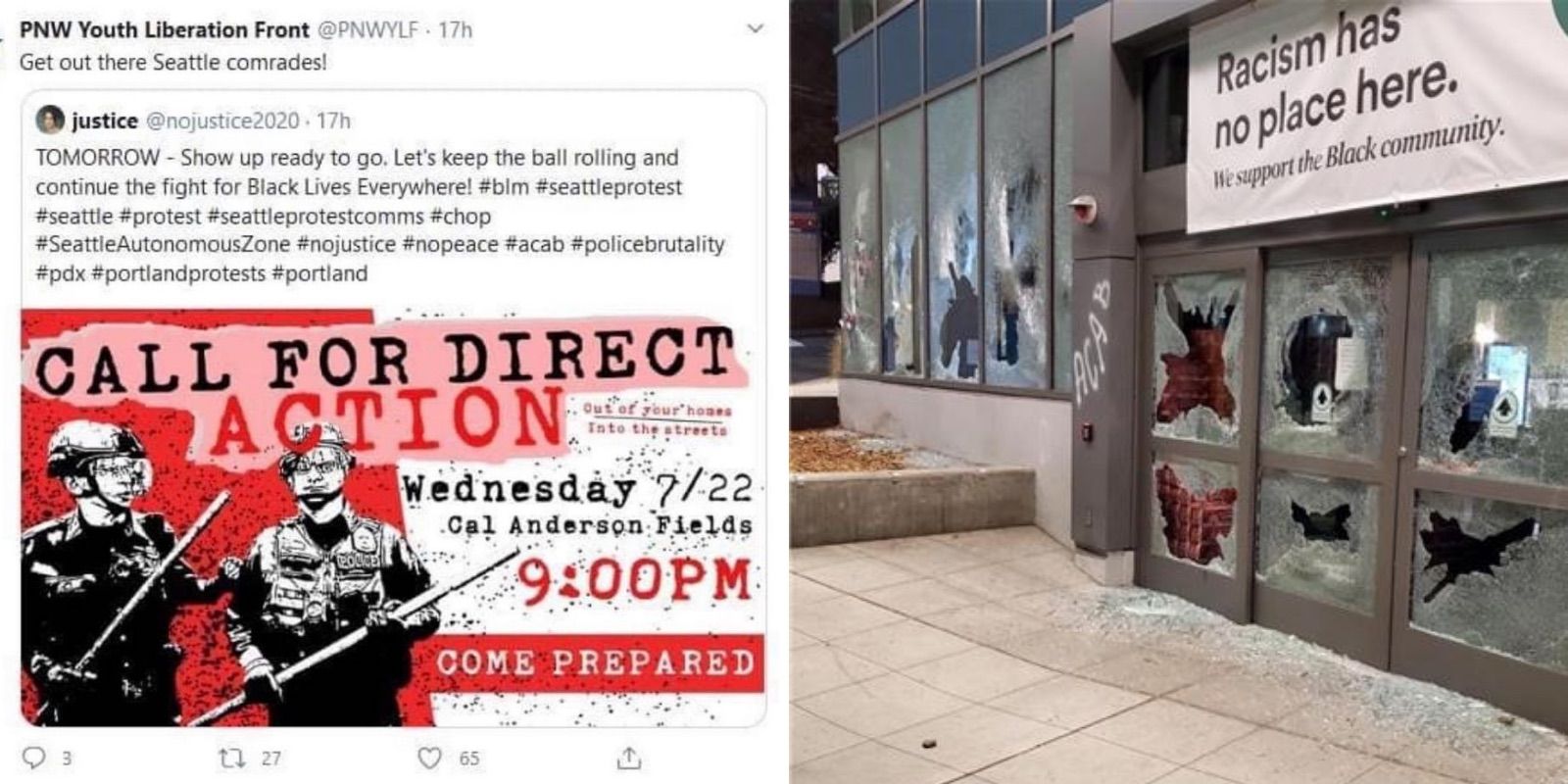 On the night of July 22, over 150 rioters took to the streets of Capital Hill in Seattle to target specific businesses like Starbucks, Uncle Ikes, and Rove Vintage. According to the Seattle Police Department (SPD) they did "massive amounts of property damage, looting, shooting fireworks, and committing arson."

The first location attacked was Uncle Ike's Pot Shop. Ike's is owned by a Jewish businessman named Ian Eisenberg. Eisenberg told The Post Millennial that "The Antifa Anarchists smashed in all those windows, threw in an explosive device, lit the whole place on fire and blew it up. Luckily it didn’t get into the main shop. But they smashed all the windows, the security gates, the doors, pretty extensive damage. Normally we can get it fixed really quick but in Seattle the glass companies are really backed up."

The Wednesday night action was not a simple protest, it was part of a larger, coordinated effort to target specific stores.

Local residents reported getting flyers on their windshields advertising the riot as a protest/event. Facebook pages linked to Antifa promoted the riots and a list of businesses deemed enemies by Antifa, BLM, and Marxists in Seattle.

Uncle Ike’s has been a regular target by activists since it opened, but Eisenberg thinks there is more to the protests and attacks than political disagreements. "There was a protest out in front of us a few weeks ago called 'Pay The Fee' where any business in the CD was supposed to pay King County Equity Now a fee for the privilege of doing business here."

King County Equity Now (KCEN) is one of the main groups advocating that the Seattle City Council defund the Seattle Police Department. That demand has been met by city council, which announced last week that they have a veto proof majority to defund SPD.

"The groups that are encouraging this in Seattle, they’re getting paid. They are getting money and property from the city. It’s working so why wouldn't they consider doing it," Eisenberg told The Post Millennial.

"I’ve been told so many times that if I gave money like a few years ago to the Black Book Club, my problems would go away. In other cities it is just called extortion."

"We were told that if we didn’t 'Pay The Fee' we would be forced out of the CD by any means necessary and that night we had an arson," Eisenberg said.

Whole Foods, which is owned by Amazon was looted after Eisenberg's store. The Seattle City Council just passed a tax specifically targeting Amazon employees and owner Jeff Bezos. Whole Foods was not spared despite having a large banner on the front proclaiming "Racism Has no place here. We support the Black community."

A Starbucks was looted, as was shop called Rove Vintage which is owned by the wife of a police officer.

No arrests were made.

"I think that there are very few people that will speak their mind. They’re not full on board with every progressive and liberal cause and I am a pretty liberal guy, if you differ from them in any aspect, you are 100 percent the enemy," Eisenberg said.

When asked if he felt the attacks were because he is Jewish, Eisenberg answered "I think that is one of the reasons I am hated. When I opened up in the CD (Central District) there was a lot of controversy. The Africatown guys were pretty point blank "we don’t want any 'hebs' in the CD kikes shouldn’t be allowed to open businesses in the central district."

"My great grandparents moved to 23rd and Cherry in 1906 and we’ve pretty much lived in this neighborhood ever since."

Eisenberg is no stranger to attacks on himself or his stores. In 2017 a local activist named Omari Tahir Garrett was caught on camera telling Eisenberg to "…go back to Germany so the Nazis could get him again."

Garrett is active in the organizations that regularly protest at Uncle Ike’s. He served time in jail for assaulting a former mayor of Seattle and has been caught on camera using slurs against Asians as well as Jews.

The same groups behind Sunday and Wednesday’s riots are planning another event for this coming Saturday.

On Thursday, the Trump Administration sent a team of tactical border officers to stand by for duty in Seattle fearing that Federal buildings in the city would be attacked like those in Portland. Supporters of the riots in Portland and Seattle frequently post about needs of activists in the other city and solicit donations of supplies. Many activists travel between the cities for riots and looting.

Seattle residents and business owners like Eisenberg are preparing for the worst fearing that Seattle officials will continue to stop SPD from making arrests and preventing destruction.

"We have really good video from last night and when the police were watching it, they knew who they were, they recognized people from the CHOP but their hands are tied. What are they supposed to do when the prosecutor wont prosecute, when the (city) council is always coming down on them for being the bad guys. They are in a really bad place right now."