Seattle passed a tax on salaries of top earners in an effort to target Amazon and Jeff Bezos. Ironically, the tax does not apply to Jeff Bezos himself. 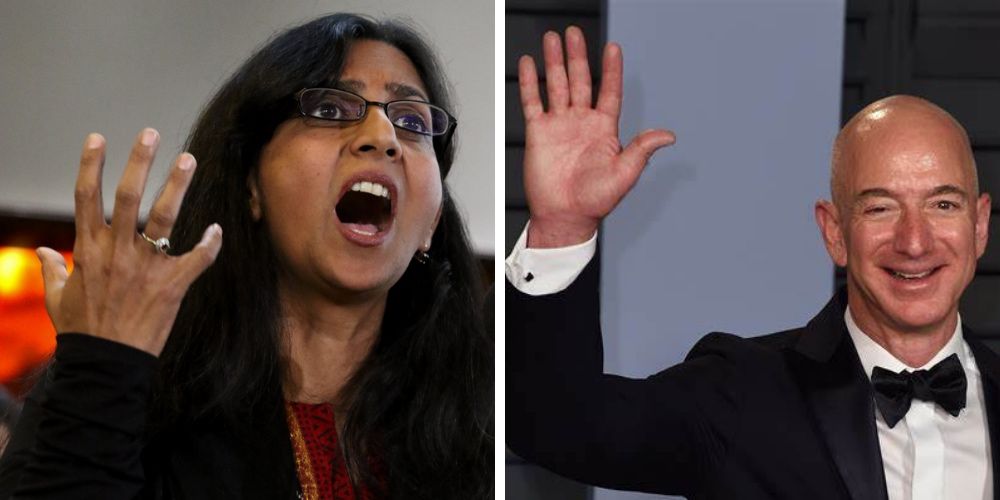 In the midst of an economic downturn, the Seattle City Council passed a tax on salaries of top earners in an effort to fulfill a multi-year promise of targeting big business, specifically Amazon and Jeff Bezos. Ironically, the tax does not apply to Jeff Bezos himself.

According to the Puget Sound Business Journal: "Bezos, the world's wealthiest human, 'has never received any stock-based compensation,' according to the 2020 proxy. His annual take-home has been $81,840 for decades. His pay is not affected by the new law."

This second level seems to have been designed for Amazon, as members of the Seattle City Council such as Marxist council member Kshama Sawant and socialist council member Tammy Morales, have long demonized the tech giant.

Sawant most recently had "Tax Amazon" booths set up in the Capitol Hill Occupied Protest (CHOP) and has used every public speaking opportunity during the Black Lives Matter protests to promote the tax.

In 2018, the Council unanimously passed the $250 per employee "Heat Tax" directly on Seattle businesses. A grassroots effort, assisted by local businesses, collected thousands of signatures in just a few weeks to put the initiative on the November ballot. Facing growing public pressure, including an Amazon construction stoppage and pressure from unions, the council repealed the tax a month later.

Council Member Teresa Mosqueda dubbed the new ordinance "Jump Start Seattle" and claims it will raise over $200,000,000 a year, which in 2020 would be directed toward Covid relief measures, including rental and business cash assistance programs, housing and food security.

In 2021 funds will be spent on tax administration, prevent Covid related budget cuts to city services, and be directed to services and programs that serve low income households and small businesses. In 2022 funds would be spent on Green New Deal investments, more tax administration, housing and services for low income families, community led development projects, local businesses and tourism.

The tax is more likely to "jump start" Seattle’s neighboring city Bellevue, which has already been nicknamed Amazon’s "HQ-2" by many because of the amount of jobs that have been moved there. The tax could apply to over 800 businesses including chains and businesses already reeling from Covid-related shutdowns, especially businesses that are reliant on Amazon and other big Seattle based companies.

The Seattle Metropolitan Chamber of Commerce, the Downtown Seattle Association and many other neighborhood business associations opposed the tax. The tax may be the largest new tax ever passed without voter approval and could apply to as many as 78,000 salaries. With more people working remotely due to coronavirus shutdowns, there is concern that affected Seattle businesses and residents will move elsewhere to avoid the tax and Seattle’s already staggering and ever increasing cost of living and operating.

Seattle is facing an estimated $300,000,000 budget shortfall due to Covid related shutdowns affecting revenue and poor "rainy day" planning. Cuts and furloughs have not been finalized by the city, aside from council members and Mayor Jenny Durkan alike vowing to cut $20,000,000 or more from the Seattle Police Department Budget. All the Council Members who voted for the ordinance were present and supportive of recent protests and riots in downtown Seattle. Some, including Mosqueda who has ties to Antifa, have advocated for the demonstrators and participants in the CHOP not to be prosecuted.