Dr. Fauci breaks his own rules, takes mask off at ball game

Fauci had claimed that “people should not be walking around in masks”, but recently he has flipped is position on this issue. 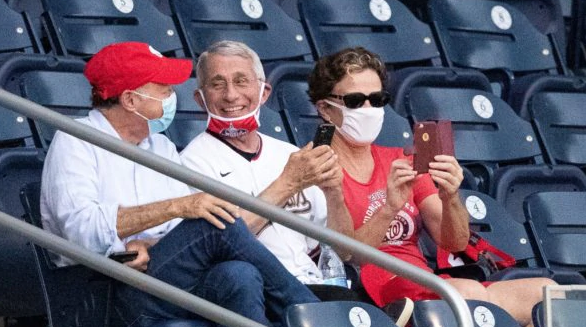 Dr. Anthony Fauci was spotted at a Major League baseball game last night sans mask, sitting closer to others than his own social distancing guidelines recommend.

Dr. Fauci was invited to throw the ceremonial opening pitch in the first game of the delayed season between the Washington Nationals and the New York Yankees. Afterwards he was seated among friends at the game, where he was spotted flagrantly disregarding his own edicts to the public.

This is especially ironic since there were very few attendees present at the season opener. Everybody is aware of the fact that the general public is not allowed inside ballparks at this point in time. Fauci was among one of the few privileged persons who could enjoy the game in person, and, of course, there was no lack of space to practice proper social distancing. But that’s not how things played out for Fauci and his friends.

Photos clearly show Fauci sitting between two of his buddies in seats right next to each other, despite the empty stadium. The other two at least had their masks on; Fauci did not.

Fauci has been the source of controversy on many occasions and without a doubt has had his detractors, right or wrong, over the past several months. But what’s disturbing today as this article is being written is his complete disregard for his own advice.

Lately, meaning has of last week, Fauci has been among those most zealously advocating for mandatory mask use, even outside, and many localities the world over have been listening. Places as diverse as Toronto, Miami, Singapore and Medellin all have mandatory mask laws in place, with heavy fines and in some cases possible jail time for offenders. People have been getting into trouble with the law for not following Fauci’s guidelines all over the planet.

Previously Fauci had claimed that “people should not be walking around in masks”, but recently he has flipped is position on this issue. However, apparently this latest reversal in his professional opinion applies to everybody else except for him personally.