Video footage has emerged on social media of a child watching a drag performer dance provocatively to a song with explicit lyrics. 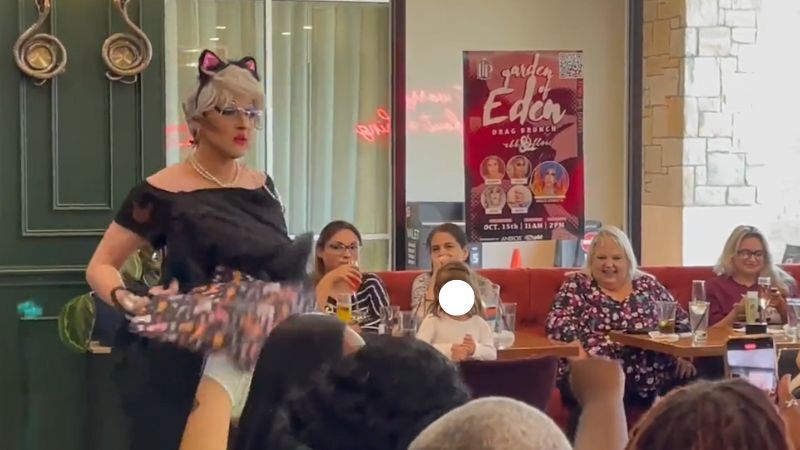 Video footage has emerged on social media of a child watching a drag performer dance provocatively to a song with explicit lyrics.

The Oct 15 performance took place at the Ebb & Flow bar and restaurant in Plano, Texas, as part of a ticketed "drag brunch" event which the cocktail bar says will take place on a monthly basis from now on.


Sara Gonzales, host of The News and Why it Matters, attended the event and shared the footage on her Twitter account.

Gonzales told The Post Millennial, "The LGBT community should not be exempt from consequences of sexualizing children. This is clear child abuse and should be banned in all fifty states. The grooming of children cannot be tolerated any longer."

A child was present to witness the sexualized performance which included a male dressed as a woman, dancing provocatively, complete with twerking and skirt-lifting, to lyrics such as "My p*ssy good, p*ssy sweet, p*ssy good enough to eat…f*ck me all night."

The Post Millennial contacted Ebb & Flow asking for confirmation that a child witnessed such a display at their establishment and to ask whether the performer or any staff members warned the child’s parents about the sexual nature of the performance prior to it starting. The restaurant has yet to respond.

When purchasing a ticket, customers are warned that it "is a ticketed event at a private establishment."

"We believe it is the prerogative of parents/guardians to make decisions regarding the wellbeing of their children," reads the disclaimer. "If you would not allow your children to see a Rated R movie or watch TV-MA programming, this is not the event for them. Minors must be accompanied by a parent/guardian."

Given their reaction in the video, it is possible that the adults who brought their child to this event somehow overlooked this disclaimer, but made no effort to remove their child from the restaurant even after the sexually explicit show got underway.

Children being exposed to this adult form of entertainment is not uncommon these days, with reports of children handing drag queens money at "family friendly" events and children being invited to twerk on stage at drag shows. Critics believe this is all part of an intentional queering of childhood with queer theorists somehow suggesting that exposing children to overly sexualized, gross caricatures of womanhood is a way to liberate society from oppressive forces.
ADVERTISEMENT
ADVERTISEMENT
Drag Brunch