A pride event in San Marcos, Texas, on Saturday became the latest to feature drag events that had children in attendance. 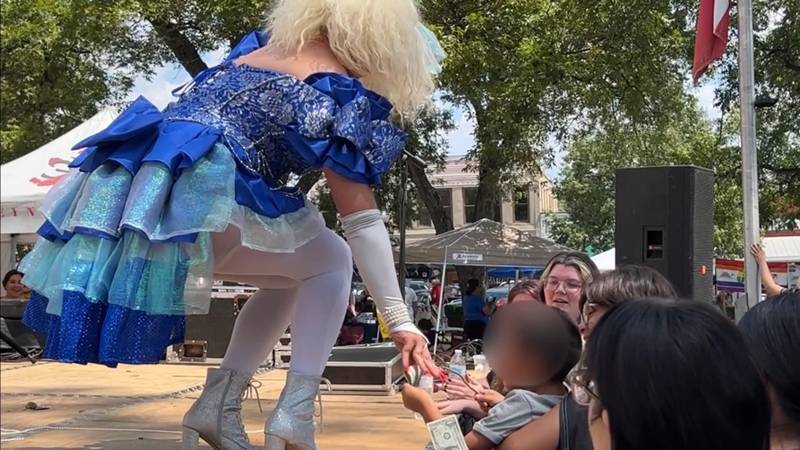 Beth Baisch Toronto ON
Sep 11, 2022 minute read
ADVERTISEMENT
ADVERTISEMENT
A pride event in San Marcos, Texas, on Saturday became the latest to feature drag events that had children in attendance.

SMTX Pride, a two-day event that included a "Trans Exclusive Youth Pagent" and an "Anti-Bully March" to help fight discrimination against the LGBTQ+ community, also included a farmers market, an assortment of artist vendors, and live music outside of the Hays County Courthouse. The "family-friendly" drag show was clearly a main draw, with a crowd arriving just in time for the first act and packing the lawn.

"Do y'all love drag queens?" the performer serving as the drag show's emcee asked an enthusiastic crowd. "Do you know what drag queens love? Money, and attention." The performer later repeated the point, adding "Some of you kids are too young to be working, because that would be against the law. But I know your parents got some money."

While the performances and language both appeared toned down for the audience, one drag queen accepted money from a child and then made a suggestive show of pulling out what appeared to be a beaded rope from between the performer's legs and waving it around.

Throughout the show parents could be seen handing minors wads of bills to hand to the performers. Others lifted their small children up so they could hand the drag queens the money. At one point, children were encouraged to help collect money which was scattered on the stage.

A second drag show occurred as part of the after-party at Roughhouse Brewing. Advertised as "All Ages" as opposed to “Family Friendly,” by the time the show started there was only one child in attendance.

The drag queen singled out the child’s father with a suggestive comment, noting that "Your kid’s going to learn sometime, I’m sorry."

After the family left, the performer said that drag queens don’t like kids because parents complain about what they do on stage, questioning why people would even bring kids to drag shows.

According to an interview with the event's organizer Sylvia Sandoval in The University Star, SMTX Pride stemmed from a monthly "Rainbow Night," but they had issues with getting kicked out of bars or shunned by other patrons. The first SMTX Pride took place in 2014.
ADVERTISEMENT
ADVERTISEMENT
Drag queen takes money from child