Hernandez turned back to the men, saying "check your white privilege, buddy. Are the Democrats of Arizona kicking out a person of color?" 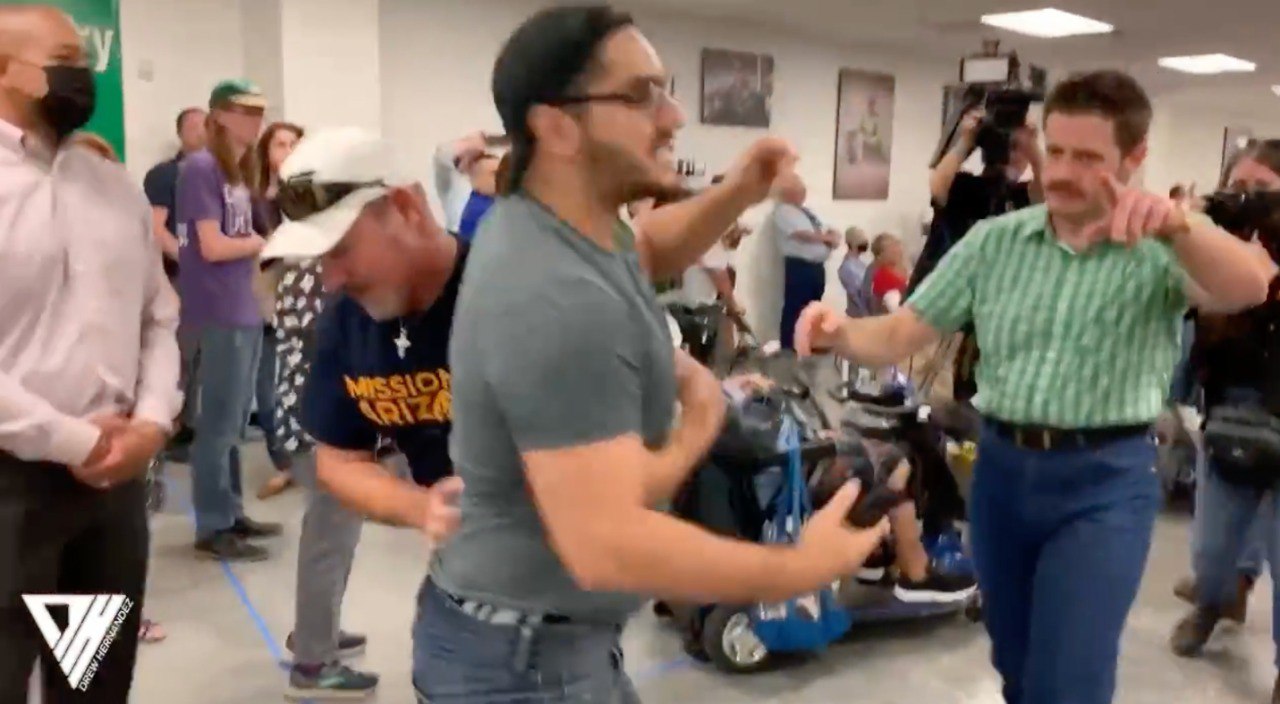 Drew Hernandez confronted Arizona gubernatorial candidate Katie Hobbs over her alleged history of discrimination, was assaulted and forcefully escorted from the campaign event.

The TPUSA contributor attended the Unite for Arizona even, hosted by the Arizona Democratic Party, and asked Hobbs about her having fired a black senate staffer in 2015. Hobbs did not answer, the crowd shouted him down, and security told him to "knock it off" as they kicked him out.

The termination led to a suit by the staffer against Hobbs, who said she was fired for having complained about low pay, saying it was a result of discrimination against both her race and sex. Talonya Adams was awarded more that $2 million in damages.

"What about discriminating against black people?" Hernandez asked Hobbs, to boos from the crowd.

"You discriminated against black people!" He called out. "Why don't you tell the people what you did?"

The crowd took up chants of "Katie, Katie," to try to drown Hernandez out.

"You have been convicted racist, Katie!" Hernandez called out.

At this point, security, in the form of a few white men, grabbed Hernandez and escorted him forcefully from the room.

"Democrats of Arizona kicking out a Latino?" Hernandez said. "Kicking out a person of color?"

Hernandez turned back to the men, saying "check your white privilege, buddy. Are the Democrats of Arizona kicking out a person of color?"

"Knock it off," one of the security detail says, pushing Hernandez from the room.

Hernandez remained incredulous. "Arizona Democrats kicking out a person of color?" He shouted. "Katie is a racist!"

Hobbs was a state senator when Adams was fired. Hobbs said at the time that firing Adams was a "group decision" and the determination was made via "consensus." Other Democrats in the state who worked with Hobbs and Adams have said that they had no issues with how Adams was performing her duties, despite the termination.

Adams has not been quiet concerning her views on Hobbs. In 2021, she said "I think she's always been very uncomfortable with minorities. She seems wholly disconnected from people of color."

Hobbs faces Kari Lake in November. Lake has stated her intention of dealing with Biden's border crisis by shutting down the flood of illegal migrants across the Arizona border and has vowed to uphold parental rights in education and for medical decisions for their children, among other position.