“The B Word” event on July 21st will have leading figureheads discuss the topic in the hopes to to “destigmatize” Bitcoin narratives for company leaders. 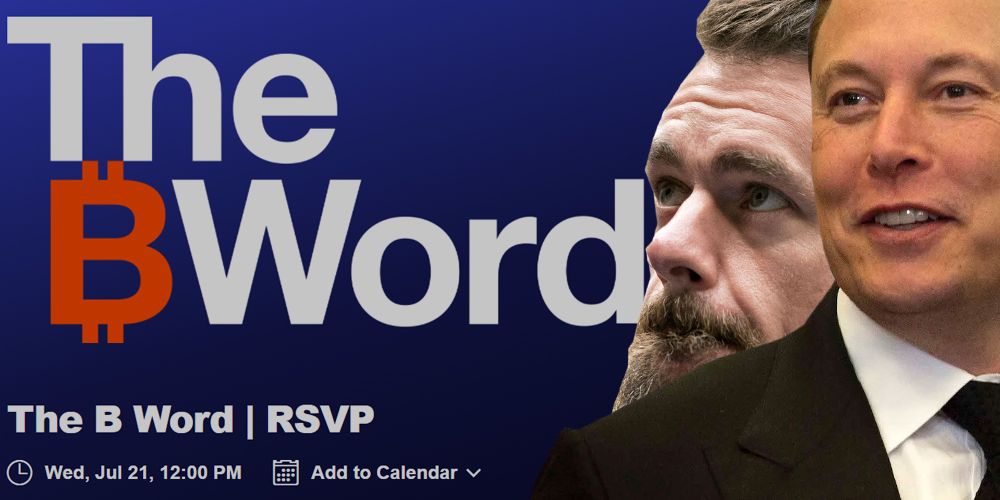 Leading innovators in the Bitcoin community are definitely getting together in a few days to gush over cryptocurrency and publicly exchange their knowledge on the subject.

Bitcoin Magazine got the scoop about “The ? Word” event featuring a live chat between Jack Dorsey, Elon Musk, and Cathie Wood of ARK invest as a third.

Jack Dorsey and Elon Musk flouted the idea back in late June, framing it as “the talk” ala a “birds and the bees” but with finance instead.

There’s much to talk about. Elon Musk and his Tesla company stopped accepting Bitcoin back in May citing concerns of fossil fuel usage. Something that was alleviated after Musk got the world’s biggest crypto miners together to come to an agreement about a shift to renewable energy.

Musk said he was working with the developers of Dogecoin too around that same time, to further establish Elon’s current “street cred” on the topic.

For Jack Dorsey’s part, he has “#Bitcoin” in his Twitter bio. What more needs to be said?

But yes, Dorsey is serious about decentralized finance. He’s not just Twitter’s CEO, but with Square and Cash App under his belt, Jack has the professional wiggle room to commit to such projects.

“Square is creating a new business (joining Seller, Cash App, & Tidal) focused on building an open developer platform with the sole goal of making it easy to create non-custodial, permissionless, and decentralized financial services. Our primary focus is #Bitcoin. Its name is TBD.”

In the past, Dorsey has directly confirmed his personal passion for cryptocurrency. Enough that getting Elon Musk and him together for a roundtable talk of some kind (along with Cathie Wood) is guaranteed to be a productive time.