Despite the fact that he was convicted for knowingly trafficking a minor, and court documents show that he took her to Phoenix to buy a new fake ID, Taylor blames Fischmann for her own sex trafficking. 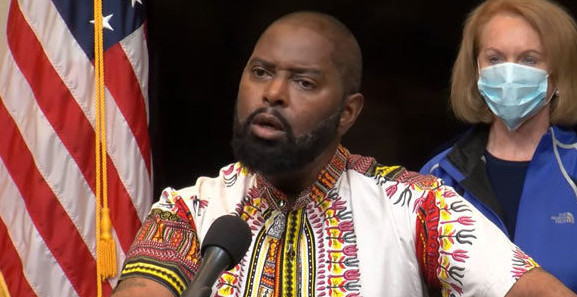 Andre Taylor, the former pimp who was appointed Seattle's "Street Czar" by Mayor Jenny Durkan, was convicted in 2000 of seven prostitution-related counts, three involving a 16-year-old girl on the charge of child trafficking, two involving adult women and two counts of money-laundering. His bail was set at $2.2 million at his preliminary hearing in 1998.

Court documents state that after meeting the 16-year-old in Las Vegas, he took her to San Francisco and trafficked her there. Afterwards, she returned to her grandmother in Fla., but Taylor paid her way back to Las Vegas and continued to sell her for sex. Additionally, the court documents state that Taylor took her to Phoenix to get a new fake ID, which showed the teen's name as "Aston Royce," aged 21.

Yet Taylor insisted that he was not aware of her age. The court stated that "holding that knowledge of minority was not required so long as the government proved that Fischmann was a minor and that Taylor was transporting her for purposes of prostitution."

At his hearing, he testified that the women he trafficked would never speak poorly of him or complain about how he sold them. That was debunked by the women who testified at the trial, although the woman who was 18 at the time of trial, 16 at the time Taylor began using her for profit, told her story "reluctantly and only under threat of perjury."

At the time of his arrest, Taylor "flaunted the fruits of his trade," according to the Las Vegas Sun, including jewelry, home furnishings, and a Mercedes. He had made a rap album called "The Big Pimp," under the name "Gorgeous Dre," and had consulted on a film called "American Pimp."

The Las Vegas Sun reported "The teenager readily admitted she was a prostitute but never would admit to the judge that Taylor was her pimp. On the witness stand, she folded her arms and stared defiantly through her straight blonde hair. Her answers were terse and designed to skirt the edge of her relationship with Taylor."

Despite having been sex trafficked by Taylor, Meagan Fischmann had fond words for her former pimp. At the time they met, she was a runaway and had nowhere to turn. Taylor, an avowed and proud pimp at the time, made the most of this opportunity.

Fischmann told The Post Millennial that she turned to sex work after running away from group homes. "I was put into the state's custody when I was 15-years-old," she said. "I was back and forth from a couple different group homes. I just didn't want to be there anymore."

She and a friend left together, and when she found herself on the Las Vegas strip, she met Taylor, "and from there we just started talking," she said. She had a fake ID, and said Taylor believed her when she said she was of age.

"The night that I met Andre he asked me how old, I told him that I had just turned 18 one week prior. So to his knowledge the whole entire time, I was of age," she said, defending Taylor from the child trafficking charge he earned two decades ago.

"It's not fair to put that type of label onto him," Fischmann said, taking responsibility for her actions as a desperate, 16-year-old runaway, "they are putting my responsibility on him."

Instead of Taylor, she blames her grandmother for publicizing the circumstances of her life at the time. "My grandmother pushed the court and said I was a runaway I was a minor and that’s when it got onto the news."

"It didn't really get connected until the other charges on Andre [until it] came to light. I guess my grandma kinda pushed and had it nationally put out that I was a minor." It was after her minor status as a trafficked child was revealed on the national news that she was taken into juvenile custody.

She continues to remember her sex trafficker fondly, and as Taylor told The Post Millennial she would, continues to speak fondly of her pimp.

"He taught me a lot," she said. "There has never been any negative feeling towards him or the situation." Fischmann insists that she has no negative feelings for Taylor, and that she doesn't view this period of being sold for sex as "a negative point or a low point."

"I don't see it that way," she said. "But it did change my life, of course, because I went into a juvenile state facility and it made me realize that I had to change otherwise I was going to keep being sent from facility to facility and the things that happened. It was a turning point but not a low point."

Fischmann insists that she wasn't coerced or threatened, though she was a minor with nowhere to turn, save for the man who sold her body for sex.

"Everything was voluntary," she said. "It was my decision. No force, no abuse or neglect." She claims instead that Taylor was her "mentor."

"He brought me out of a self-destructive behavior," she said, "that I was literally spiraling down hill on. I just don't see it how other people are seeing it. People are going to say you're still being manipulated. No I'm not. I was a very smart woman at a young age and I had to grow up very fast. I made my own decisions and I still do to this day."

In Taylor's trial at the time, US District Judge Howard McKibben said that he was "deeply troubled by the 'permanent scarring' the girl must deal with since Andre Taylor introduced her to prostitution. McKibben said he saw 'great fear' in the girl's eyes as she struggled to testify against Taylor at his September trial."

Her body language on the witness stand was reportedly defensive and recalcitrant. The Las Vegas Sun stated that "The teenager readily admitted she was a prostitute but never would admit to the judge that Taylor was her pimp. On the witness stand, she folded her arms and stared defiantly through her straight blonde hair. Her answers were terse and designed to skirt the edge of her relationship with Taylor."

Fischmann still defends Taylor. "I see everyone attacking him," she said. "I'm the said 'minor’ and I'm the one telling people over and over this is not what happened. You're holding someone accountable for my actions when he did not even know… I had an ID that stated that I was 18-years-old. How are you holding him accountable for this?"

Fischmann is convinced that she is to blame for having been sex trafficked by Taylor when she was a teen runaway, and not the other way around.

The Post Millennial reached out to Taylor for a comment, and he said that he was charged with "knowingly" using a minor. He said that he "didn't know, because she had used a fake ID."

Despite the fact that he was convicted for knowingly trafficking a minor, and court documents show that he took her to Phoenix to buy a new fake ID, Taylor blames Fischmann for her own sex trafficking because she used the fake ID to indicate her age. Taylor appealed his case on these grounds, but the court found that "the statute is intended to protect young persons who are transported for illicit purposes, and not transporters who remain ignorant of the age of those whom they transport."