"I got assaulted," Bouferrache wrote on Twitter. "I’m banged up but will be ok." 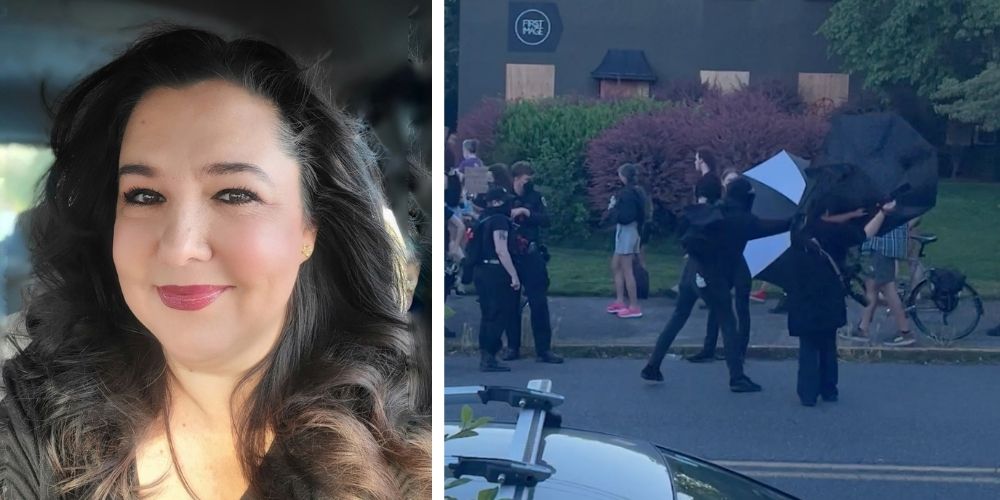 On Monday evening, a female photojournalist was assaulted by Antifa members in Portland, Ore., as the group vandalized a pregnancy resource center and building associated with a church.

Footage provided to The Post Millennial by Bouferrache, showed the moment that she was assaulted by black bloc Antifa, who were carrying umbrellas.

The footage shows Bouferrache being blocked from filming by the umbrellas, which later escalates into a drink being poured on her, her being hit and shoved with the umbrellas, and her phone being knocked out of her hand.

Bouferrache told The Post Millennial that her phone was cracked during the assault.

The video was taken by Tim Mills of Eastside Coffee Bar & Workspace, which is associated with Hinson Baptist Church and located in the same building as First Image.

In regards to Mills, Bouferrache said she encountered him after she separated from the crowd later, when she was hit with pepper spray.

Bouferrache said that Mills offered to help, adding that she discovered he works in the coffee shop, and that his wife works in the First Image pregnancy center. The two live across the street in one of the houses Hinson Baptist Church owns.

She added that she went around the back of their house to enter, worried that the crowd outside may target the Mill family home.

In one video posted to Twitter, which starts around the end of the video taken of the attack, Bouferrache recounted how members of the group threw her phone to the ground, and stomped on her sunglasses.

"I got assaulted," Bouferrache wrote on Twitter. "I’m banged up but will be ok."

An event flyer posted to Twitter said that the 7 pm gathering was intended to "continue applying pressure and building momentum" following Friday’s Supreme Court ruling that overturned Roe v Wade, and noted that "this march will not be permitted, no cops will be allowed, wear a mask."

Recounting the series of events that led up to the assault, Bouferrache told The Post Millennial that when she drove to the park meeting place, she saw a woman dropping off a group of teenagers.

"There was a woman who looked to be my age or a little bit younger dropping off three teenage-looking kids and in masks, and I heard her say something like, 'be safe, love you,'" she said, noting that it looked like dropping of kids to a swimming pool or the movies. "And she knows that they're going to a protest."

Earlier this month, one of First Image’s Portland pregnancy centers was set on fire. In a Facebook update, the center said that between the fire, smoke, and water damage, the center will have to be gutted, and rebuilding would take up to nine months.

After Bouferrache parked near First Image, she said that she saw hired security guards and men quickly trying to board up the windows of the building with plywood.

When she arrived, she said the men were only halfway done covering the building, and that "I was like, oh my gosh, if they don't get this done, these people are going to destroy all these glass doors and the windows. And these guys aren't working as fast as they can."

It was shortly after this that the group began marching down the street, approaching the building.

During another assault by the group, Bouferrache recalled her phone getting knocked out of her hands at least three more times, being hit in the head by a screen window that had been removed from the building, and being pepper sprayed in the face.

Bouferrache captured black bloc Antifa members using umbrellas to provide cover as they spray painted messages on the outside of the building, which also houses the offices for Hinson Baptist Church.

Some of these messages included the abbreviation "ACAB," "'Peaceful' won’t make change," and "if abortion isn’t safe, neither are you."

As she was attempting to film the vandalism, one woman stood in front of the camera, saying "you’re not gonna tape my friends."

According to a thread of tweets from The Post Millennial editor-at-large Andy Ngo, the woman seen yelling at Bouferrache is Felicia Blair Schoenky, also known as "Princess Unicorn."

The woman begins jumping and getting close to Bouferrache, who says "get off me."

"I dare you to f*cking mace me, c*nt. I f*cking dare you," the woman said before walking away. Earlier in the video, other members of the group pointed out that Bouferrache had mace on her. Bouferrache told The Post Millennial that she later had to use that pepper spray on a person that becoming extremely aggressive with.

After posting a picture of a window that had been pulled out, Bouferrache posted a video showing the aftermath, with a broken umbrella laying on the ground with the damaged window.

In the background of the video, a woman is heard yelling, "they don’t want to f*cking help you, nobody gives a sh*t about you," referring to police, saying that she was calling the cops. Bouferrache said she wasn’t calling the cops.

"She’s worth f*cking nothing. Eat sh*t and die."

Bouferrache said that throughout the encounter, the police that were at the scene did nothing to help.

She said that she told a female officer that she would like to report an assault after the first attack, with the officer responding by giving her her card. She was later assaulted for the second time.

In a comment given to The Post Millennial editor-at-large Andy Ngo, a spokesperson for the Portland Police Department said that it was harassment, not and assault, that had been reported.

"This group marched for 30 minutes, during which they spray painted a single building," the statement said. "A woman later contacted police and reported being harassed. Officers took her report, and will follow-up as appropriate. Officers were in the general area of the march, but did not observe the assault."

After a follow-up email from Ngo stating that Bouferrache made a report for assault, the spokesperson clarified what had been initially relayed to him.

"The initial information I got was that the victim was not injured. For the purposes of a criminal charge, for someone to have been assaulted they must have sustained physical injury," the statement said.

"I didn’t want to misrepresent what happened by saying she was assaulted if she wasn’t. I just looked up the charge we have probably cause to arrest a suspect for, and it does say assault. However, in the report, the officer indicates that there are no injuries, so I’ll have to get their perspective on why there is a PC for assault. All that being said, because the officer has assault in their report, I feel comfortable saying the victim was assaulted," it concluded.

Filming the outside of the building, Bouferrache said, "this is really sad, my kids were baptized here. And all these people who work here just want to help pregnant women in difficult situations."

"Nobody at this church has attacked them," Bouferrache said in another clip. "They provide help for women."

Two Antifa members then approached Bouferrache in black bloc, shoving umbrellas in her face as others in the background yelled "fake clinic."

Windows could be heard being broken in the background.

Bouferrache also captured a photo of the side of the building, saying that a mother "had her little boy pee on the church. I watched it happen...but couldn't get a good photo." She said that since the tweet, Bouferrache said that she has been branded as a "pedophile" by the far-left.

"I was across the street at this point. And I could see this lady who's clearly telling her little boy to pee on the church," said Bouferrache. "So I take a picture of it."

Bouferrache said that she was "dozens of yards away" from the incident, and that the photo was blurry.

"And now they're calling me a pedo and I'm not going to be able to take family photos anymore because I'm going to be labeled a pedo. They will destroy my business," she said.

"So they're trying to set that up that I'm did something vile and horrible and I'm a pedophile, trying to photograph a little child's genitalia, which is not what happened at all," she later added.

The vandalism of the pregnancy center marks the fourth night of destruction in the city following the Supreme Court's Friday decision.

On Saturday night, members of the group vandalized and caused damage to numerous buildings across the city. During this night, the group targeted what they though what a pro-life pregnancy center, which turned out to be pregnancy center run by a pro-choice Democrat.