'Death to SCOTUS' spray painted in Portland, Oregon during second night of riots

Late last night, pro-abortion activists rioted in downtown Portland, Oregon, and spray-painted messages such as "Death to SCOTUS" during relentless vandalism and violence. 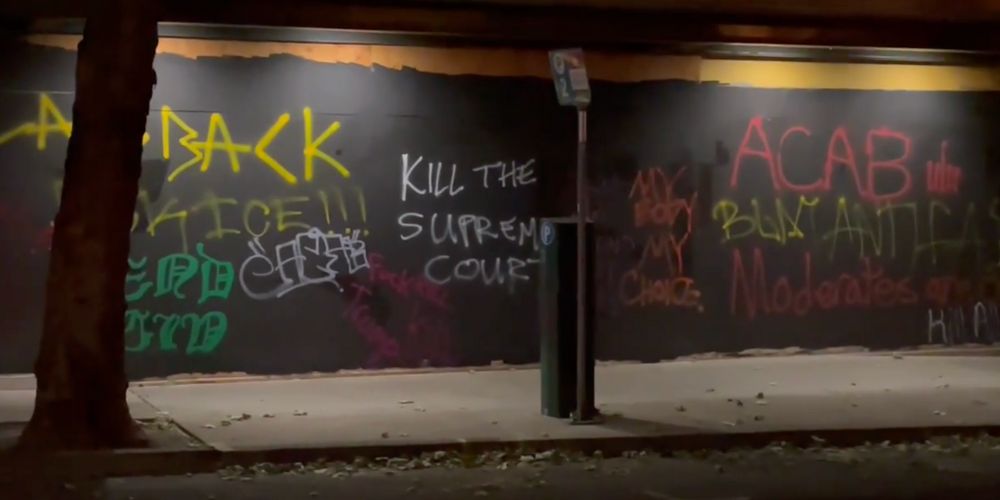 Late last night, pro-abortion activists rioted in downtown Portland, Oregon and spray-painted messages such as "Death to SCOTUS" during relentless vandalism and violence.

The Post Millennial's Andy Ngo posted additional photos on Twitter covering the destruction and wrote "For a 2nd night, #Antifa carried out violence in Portland, Ore. at a riot. On June 25, a mob of them in black rampaged through NE Portland, smashing up businesses, a @PPSConnect school van, a Tesla & a pregnancy center. Police said they couldn't intervene."

Ngo posted an official statement from the police who watched the rioting which said, "Officers were monitoring the crowd, but did not have resources to intervene in the moment."

This marks the second night of violent protests and rioting nationwide following the June 24th Supreme Court decision reversing Roe v. Wade. Soon after the landmark decision came down, a pro-life supporter of the reversal was pepper-sprayed and tackled in Seattle, Washington during a pro-abortion protest. In Los Angeles, California a pro-abortion protestor used a makeshift flamethrower on police during an Antifa riot.

Antifa also started a fire outside the Mark O. Hatfield federal courthouse despite the building being behind protective barriers erected during separate riots in 2020.

"ACAB," and "Abort the court" were other legible spray-paint messages in the chaotic buffet of vandalism.

Ngo highlighted Antifa's vandalism of a Tesla claiming it was directed at Elon Musk saying, "They view [Elon Musk] as an enemy because their riot promotion, violent extremist propaganda & cash fundraising takes place on Twitter."

Threats against the Supreme Court have been on the rise since a draft of Friday's decision was leaked in May. Following the May leak, an assassination attempt was made on Justice Brett Kavanaugh's life. Democratic leaders encouraged protest outside Justices' homes, including Kavanaugh's, even after the the failed assassination attempt.

Attacks were also promised by the radical pro-abortion group Jane's Revenge, who said America would experience a "Night of Rage" if the court stuck to the leaked opinion.

The Department of Homeland Security drafted a memo warning of an increase in domestic violent extremist attacks from pro-abortion fanatics and named "Jane's Revenge" as a primary instigator. Republicans have lobbied for the group to be identified as a terrorist organization.