EXCLUSIVE: Gina Carano on her new Daily Wire film, 'Terror on the Prairie' 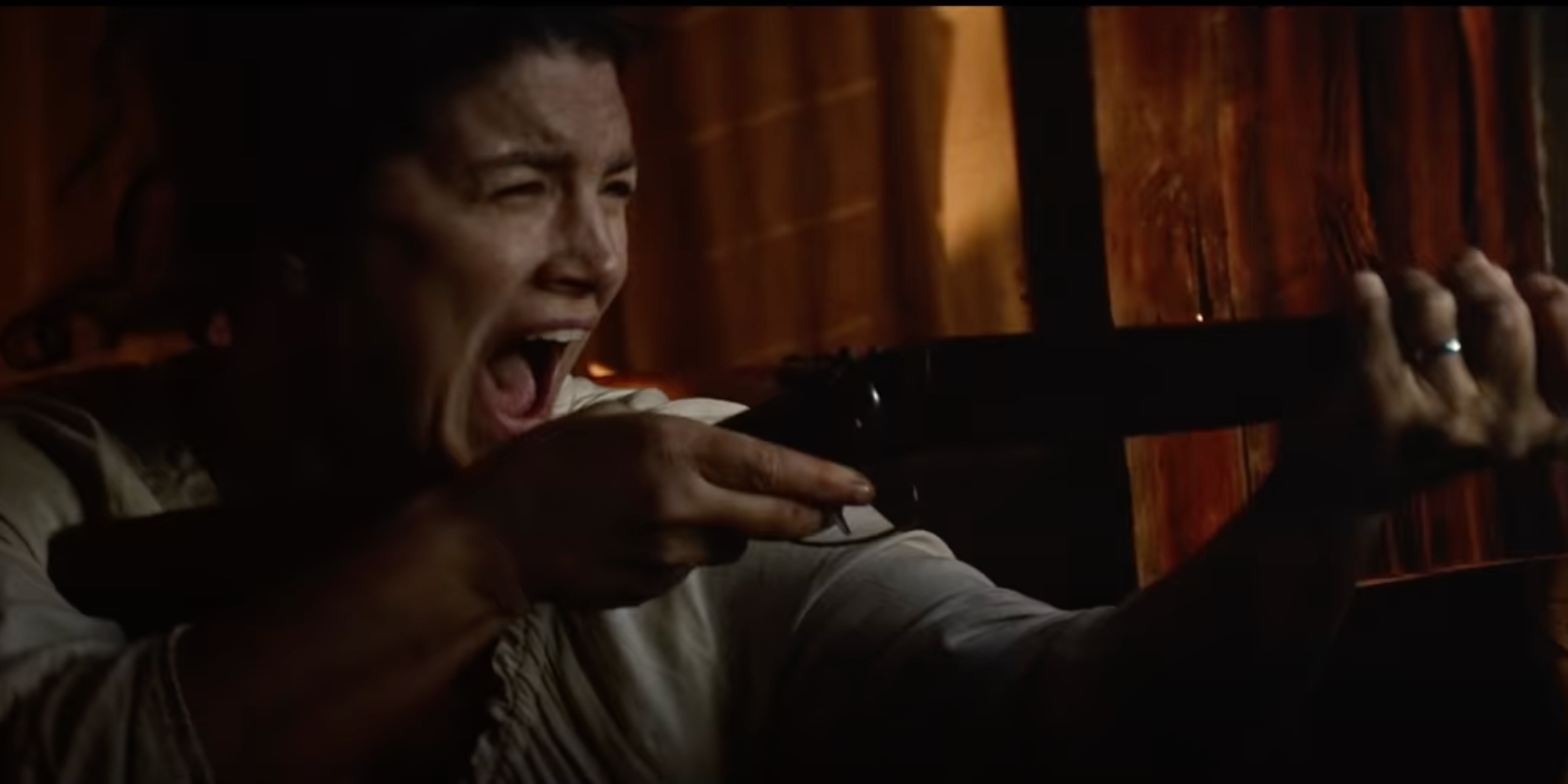 Near Bozeman, Montana, The Daily Wire and Bonfire films brought a challenge to Hollywood, in the form of a feature-length western film. Terror on the Prairie is the second collaboration between Daily Wire and Bonfire, but this one stars actress Gina Carano, who was summarily dismissed by Disney and mainstream Hollywood producers because her views were simply too risky.

Carano is going to be alright. She's got a big heart, she's talented and kind, she works hard and frankly she's a joy to be around. A few years ago though, the ejection from Disney, the incredibly harsh judgment from progressive Hollywood, and the summary dismissal of Carano from polite entertainment society would have been a complete career killer.

Now, with the emergence of a conservative culture that has both funding and an audience, Carano and others are able to continue their arts careers without having to give up their values to do so. And the work that's being created is a reflection of those values. Terror on the Prairie, about family and loyalty, does that.

"I love the family aspect of it," lead actress Gina Carano told me. "I love that. I feel like a lot of us are having to start over in different ways. And she's, you know, my character is going out there, out of her comfort zone because she loves her husband and family. And I think the whole family unit of it is gorgeous."

A stone's throw from nearby hot springs, in the valley of majestic mountains, on a hard, rocky ground covered in heather and wild flowers, two log frame structures made up the homestead set for the film. The genre is that of a western, and in the crisp air, with horses tethered off to the side, and a warm sun adding a glow to cast and crew faces, there was nothing to say that this indie production was particularly groundbreaking, or representative of a new form.

It's a big risk for a news and media outlet to undertake feature length film production, but to break out of the progressive Hollywood hegemony, it will take companies that already are something of a cultural force, with an existing audience that is eager and hungry for new entertainment content. The Daily Wire has been delivering news and commentary, but with their platform, their base, and their contributors, they were perfectly poised to take on this challenge

But they have some incredibly big bonuses on their side, and one of those is actress Gina Carano. I had a chance to speak with Gina inside an old church framed against the Absaroka Mountains. The church was part of a town set that had been built some time ago that was repurposed for Terror on the Prairie.

We spoke about building a character, creating art, and the change that this kind of freedom represents for her career. One thing that was evident upon stepping on to the Terror on the Prairie set was that it did not adhere to restrictions that are prevalent in Hollywood. Gina hadn't wanted a restricted set, and to get around that—testing, masking, vaccine requirements, keeping the set closed—The Daily Wire did not run a union shoot.

Carano said that when they began this project, there was some concern that the unions, SAG, AFRTA, were going to require vaccines on set. The Daily Wire's previous film, Shut In, did operate under union guidelines. Carano is not a fan of those rules, though she is not opposed to people doing that if that's what they want to do.

"I don't feel comfortable with it," she told producers when they asked. We were sitting in a large dining room, almost a cabaret space, that was the site of a previous film that had used the land. The buildings they left behind served as indoor space for crew and actors during downtime. It was homey and comfortable, and the lack of restrictions like masks made it easy to relax and talk.

"I don't feel comfortable with mandates," Carano said. Mandates "are kind of going against everything I got canceled for. I'm not trying to force my stuff on other people, and I'm not trying to have other people force their stuff on us. I feel like if everybody just had a little bit of freedom, conversation could go a long way."

As to the choice of Terror on the Prairie, the script spoke to everyone who was involved, but there were concerns about embarking on the genre of a Western, and an indie Western at that. "A Western is like biting off a huge chunk of art," she said. "Everything has to be so on point for a Western, but then I was like, 'alright, let's go bite off a lot!'"

Because of her status with SAG, where she's able to do both union and non-union work, she did not run into trouble there. Neither did Nick Searcy, who is also on the film. "All the troublemakers," Carano said.

She laments that people are losing their jobs over vaccine mandates. "Eventually it's just gonna have to stop," she said.

"So for us, the idea was just like, let's go create other work, somewhere else, for people that don't feel like having this shoved down their throats. And it's not the first time I've done something like, pioneering, so I was like: 'well, what the hell, you just walk through that door. You just see what's on the other side of it, and you kind of figure it out from there.' And it's not easy."

As she's embarked on this more indie career, since being pushed out of Disney, Mandalorian, and Hollywood, she said she's been finding great people to work with, something of a new tribe.

"I'm finding people with actual open minds," Carano said. "I'm finding people that really do want to have a conversation. Not everybody that I follow or am friends with has the same beliefs, but they all want to look you in your face and be like, 'I want to hear what you have to say.'"

Being cut from Disney, she said, likely would have happened sooner or later. "I would have been canceled anyways, 10 times from when I was canceled, so I'm actually happy it happened because my heart is free. I'm not hiding. I'm honest, I'm out here. And I'm a very flawed human being. I don't have everything figured out. But I know one thing is I'm attracting people that I absolutely like— I'm finding a tribe."

The experience Carano had is one that many artists have gone through in recent years, though many of them were less well known than the woman who played the beloved Cara Dune in Mandalorian. Those artists don't have The Daily Wire making themselves available to produce and create new work, to facilitate new artistic ventures. I asked Carano what she thinks the future holds for not only the canceled, but artists and producers who want to make their own work outside of the current ideological restrictions in artistic institutions.

"I personally think this is the time. A lot of the studios and the bigger corporations are muffling art, saying 'you have to fit into what we say you get to do.' But when I look back in history, the best work is free and edgy, it's like, middle fingers up, and it wasn't popular at all in those times."

"That's what we're doing right here and now," she said. "We're trying to communicate to the world like you don't have to just do this one way."

We talked about the origin of storytelling, "Stories told about the hunt around a fire. I want ash in my face when I'm hearing a story," I said, "I want to live it."

The targeting over political ideology isn't just happening in the realm of art, and I told Carano about how things go in journalism, specifically with The Post Millennial. "People are trying to take us down because they don't like our politics," I said, noting that canceling is something lots of us at The Post Millennial are already familiar with in our lives.

"You know why they're obsessed with you, right? They're obsessed because you're everything that they can't be. They're not free. They're not edgy, they're not artistic. They are putting on an outfit, a uniform and they're listening to and following the rules. And you're out here actually being the edgy ones that they think they're dressing up as."

What's needed is to build a new community, where people are comfortable speaking freely, with the understanding that we don't need to police our ideas and people don't feel inhibited to create art that doesn't adhere to a political ideology.

"I don't know if we have the numbers yet. I don't know. But I feel like you know, just a flicker. That's why I have that little light on my Twitter handle is because I just want to be the light that'll light that light and light this light and let people start understanding that we're not going to have to live in the dark," Carano said. She spoke about her nieces, and wanting to fix this for them.

"What advice would you give them if they were young artists who just want to make beautiful work and not propaganda or have to make art activism?" I asked.

"For me," Carano said meditatively, "it was losing everything. And I just knew I couldn't get on my knees for that propaganda that I saw so clearly. I got stripped of everything, and I feel like that was the best thing that could have happened to me because then things really do get real.

"After you're canceled, you're looking at yourself, and your family is looking at you like 'what the hell?' And you're like, 'I don't know, but like I feel like I have respect for myself.'