EXCLUSIVE: Interview with the so-called 'warlord' of Seattle’s autonomous zone

When asked what the endgame of the occupation was, they said, "to keep the peace and unity, honestly, that's it. We're going to keep pushing that, there's nothing but that." 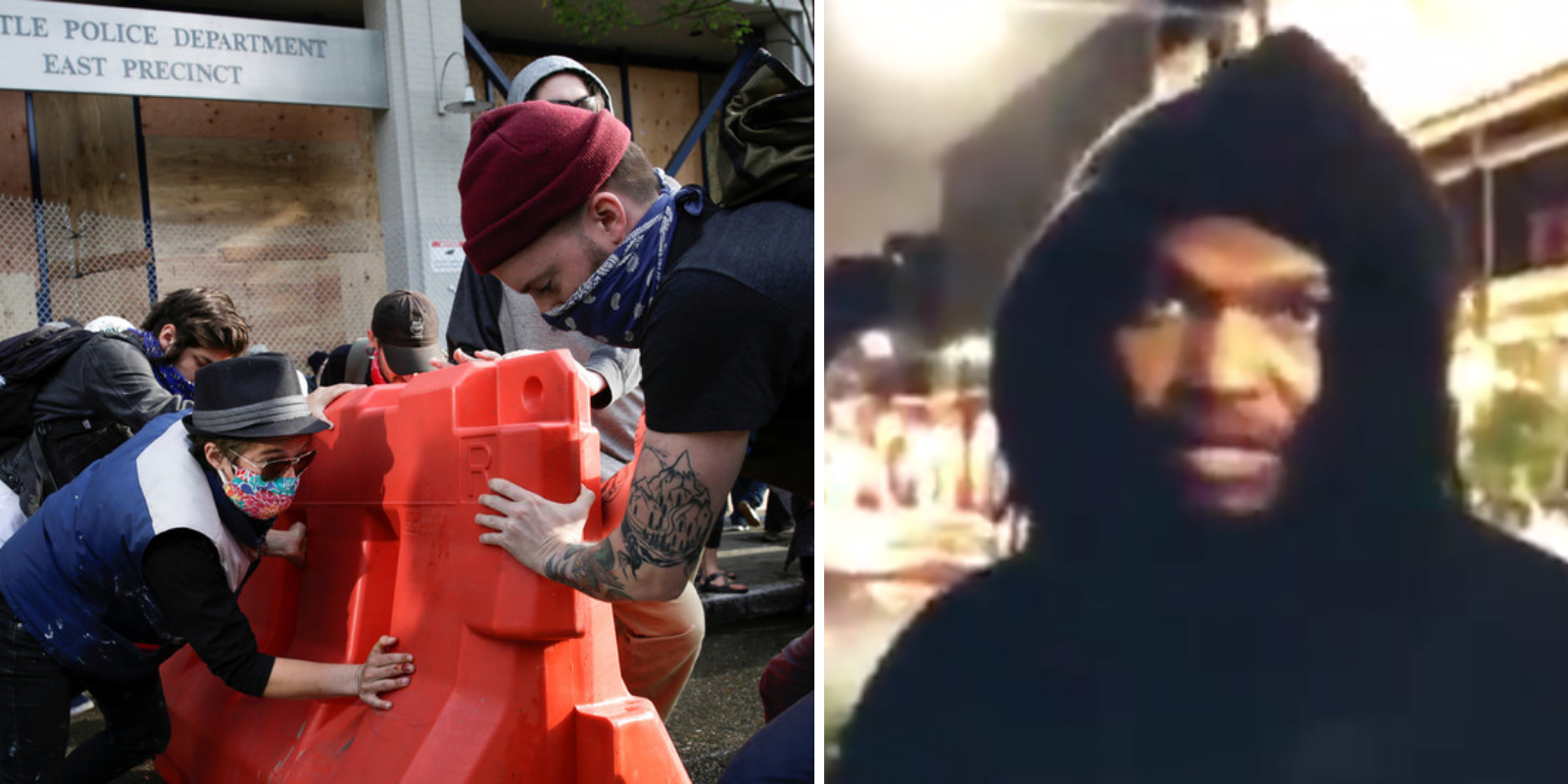 The Post Millennial was in downtown Seattle yesterday, and interviewed hip-hop artist and Black Lives Matter activist, Raz Simone, who has been called the "warlord" of Seattle's recently occupied Capitol Hill Autonomous Zone.

Simone has been involved in the occupation, and was recorded assaulting a man who was videotaping at the perimeter.

Yesterday afternoon, Simone was standing with others outside of the Seattle Police Department's East Police Precinct, where he and and another man said they were keeping watch over it to make sure that people didn't go inside.

The Post Millennial asked Simone why they were stopping people from entering the East Precinct building.

"Right now," Simone said, "everyone's having conversations with the mayor, and all that stuff. The way that she's [Mayor Jenny Durkan] talking, she's probably going to give this to the community, but right now we're just being respectful and not going in there and falling into a trap of a narrative of thugs running into the building and ransacking or something like that."

When asked what the endgame of the occupation was, the first man said, "to keep the peace and unity, honestly, that's it. We're going to keep pushing that, there's nothing but that."

The recently published list of demands was raised, and The Post Millennial asked if the meeting of those demands would end the occupation.

"A few organizations have different demands, and no one speaks for everyone," Simone said, "but everyone's trying to get together. Everyone's upset, we all came here in unity, just over the fact that cops need accountability."

He went on to say that "It shouldn't be that you have a badge and you can kill whoever you want with no repercussions, you don't even get fired, or tried as a regular person, or charged, and you definitely don't get convicted.

"The community, from what I hear from most people, is that the community wants to reclaim this [the East Precinct] and have it be something more positive than what it's been. So there's a few things like that that are going around.

"But this is the time when everyone comes out with their different ideas that might be great or might be different agendas, or whatever, and then everyone tries to put them together and figure them out as a community. So it's one of those waiting games, being patient.

"It's just kind of like, okay, now we're here, now let's wait for the dialogue. Let's get dialogue going. That's just pretty much where it is for me—just get the dialogue, do my part right now, and just try and keep it together."

He was asked if there was a plan to take over other precincts, and said "I can't speak for everyone, I don't know what everyone else is about. But we're just trying to send a message, and get accountability held, and that's that. Nobody wants to be doing this like this. It's not like we're like 'yes!' At some point you have to stand up for what's right, and it's like another [unintelligible] and everyone had that thought at the same time."

Simone and the other man carried walkie-talkies to communicate with others across the CHAZ, and Simone carried a holster, but no firearm.

"That's symbolic, we had that, but now it's peaceful, there's nothing in here. We were just watching the perimeter. There were calls, and things on the scanner about white supremacists coming up and all that stuff. And so for a second some of us wore arms and watched the perimeter, but that's not what's happening now."

In the absence of elected officials and unionized law enforcement, enforcers and leaders elected themselves to those positions.

The newly cordoned off Capitol Hill Autonomous Zone in Seattle formed after the Seattle Police Department's East Precinct was taken over, and appears to have the support of local leaders, from city council, to the mayor up to Governor Jay Inslee.

It has since surfaced that Simone has a history of anti-gay tweets.