Vanguard asked families, including those with children, to attend a drag show put on by the company in honor of Pride Month. 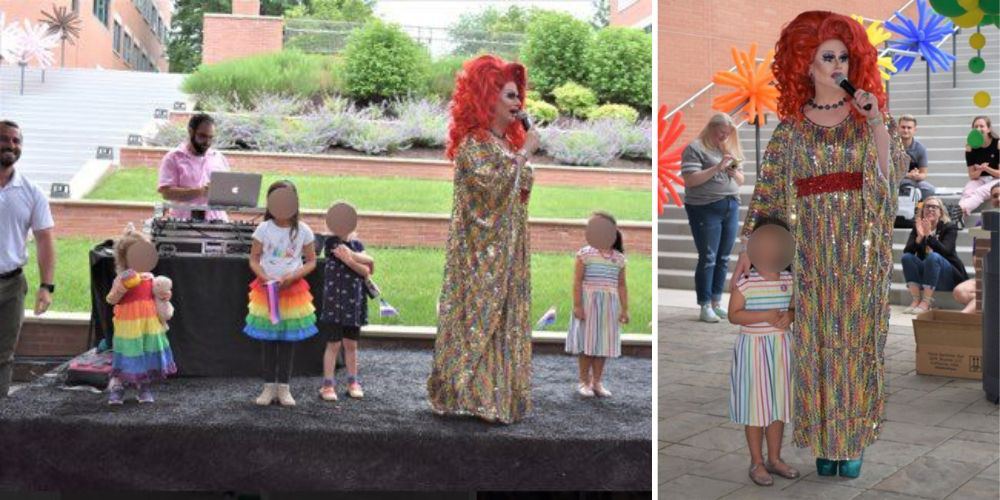 Vanguard, one of the largest investment management companies in the world, has launched company-wide initiatives to push Pride, abortion, and DEI on employees, their families and children. With $7.2 trillion in assets under management, Vanguard is rivaled only by the infamous BlackRock.

In documents obtained by Human Events Daily's Jack Posobiec from a whistleblower and given The Post Millennial, it is revealed that Vanguard asked families, including those with children, to attend a drag show put on by the company in honor of Pride Month.

In one post made by Vanguard Chief of Staff Kaitlynn Shaker, members of the company’s Women’s Initiative for Leadership Success (WILS) were invited to a "spectacular Pride event" held at the company’s Main Campus in Pennsylvania.

According to Vanguard, WILS "supports Vanguard’s efforts of increasing the representation of women in leadership at Vanguard. WILS has members in Australia, Asia, Canada, Europe, Mexico, and the US"

The event, held on June 16, was put on by members of the company’s Out Professional Engagement Network (OPEN) employee resource group.

OPEN "promotes inclusion for LGBTQ+ crew and empowers allies. The group works to ensure that all crew can comfortably bring their authentic selves to work and thrive in their careers. OPEN has members in Australia, Europe, and the US," according to Vanguard.

"This will include networking opportunities, a community service event with the Valley Youth House that support vulnerable and homeless LGBTQIA+ youth, and a big old family-friendly party complete with a caricature artist, food and beverages, DJ, photo booth, lawn games, and Vanguard’s first ever drag queen performance!" A screenshot of the post, obtained from he whistleblower, read.

"The OPEN team has worked diligently for months to make this special event happen, and WILS encourages our membership to show up and support our fellow CRG in making this a celebration to remember," the post continued.

The drag performance featured the drag queen "Bev," who won 2019 Philadelphia Drag Queen of the Year.

Photos of the event showed young children on stage with the drag performer, some dressed in rainbow skirts and dresses.

Writing on the company’s page for OPEN, it states that employees are "welcome to bring your non-Vanguard friends and family" to this Pride event.

OPEN also advertised various events in other states, including North Carolina, where employees could join in on Pride activities hosted by Vanguard.

The company’s Pride Month festivities also included author Soman Chainani in a "special edition of Talking with Kids," held by OPEN and Leadership and Engagement for Asian Professionals (LEAP).

According to Vanguard, LEAP "enhances the Asian crew experience by providing a network of support, development, and empowerment, with a goal of increasing representation of Asians in leadership at Vanguard. LEAP has programming in Asia, Australia, Canada, and the US."

"Soman will share stories about growing up gay in an Indian household in South Florida, as well as insights on how to best communicate with kids on LGBTQIA+ topics…" the post read.

The company has also expressed its support for its workers to have access to abortions following the Supreme Court’s overturning of Roe v Wade in June.

On June 28, four days after the decision as released, the company released a statement on their internal community board CrewNet outlining their "commitment to healthcare access."

"As always, our priority is to ensure our crew have access to the benefits and support they need. Abortion and abortion access are deeply personal issues, and we respect and recognize that, on this matter, crew have wide-ranging and strongly held beliefs and emotions," the post stated.

"Vanguard’s health plans will continue to offer coverage for a full range of reproductive healthcare services and will reimburse crew for travel and lodging expenses for covered medical services not available locally, including abortion if not available in a crew member’s home state."

The company overall stresses an importance in Diversity, Equity, and Inclusion (DEI) efforts, with the ideology being one of the company’s key "cares," alongside environmental concerns, philanthropy, and others.

"For Vanguard, there is no end to our DEI journey. We have aspirations for DEI in our crew experience and see DEI as an integral part of how we serve our clients and communities. Although we are not yet where we want to be, we are excited about our progress and focus on the path forward," reads a company report regarding DEI.

This push towards DEI initiatives recently culminated in an event titled "The Critical Lever: Engaging White Males in Advancing DEI."

The event will be held on July 19 at the company’s Pennsylvania campus, as well as virtually.

It states that the event features research from Seramount, a women-led research company that focuses solely on DEI, as well as other firms "to explore on behalf of the experienced of white male managers’ engagement with diversity, equity, and inclusion."

"White males are a critical part of the mission to build a fair and more inclusive world," the event’s description, posted to CrewNet, reads. "Research shows that while many care about DEI and believe it to be beneficial to their organizations, white males are often uncertain about how to get involved, particularly leaders in middle manager roles."

"This event will highlight white male leaders’ roles in advancing inclusion at Vanguard, a key component of our DEI strategy and a critical element of the experience for all crew."

"We are on a multiyear journey to create an enduring supplier diversity program that will identify and promote representation of diverse suppliers and increase overall adoption within Vanguard’s supply base," Vanguard wrote.

"This year, we are focused on benchmarking with financial services peers to learn best practices, understanding the partners that our suppliers contract with, driving program education and awareness, and setting goals for our progress."

"DEI is not simply an HR project. It’s an enduring organizational imperative and is the responsibility of all crew members," said Crystal Hardie Langston, Vanguard Chief Diversity Officer.