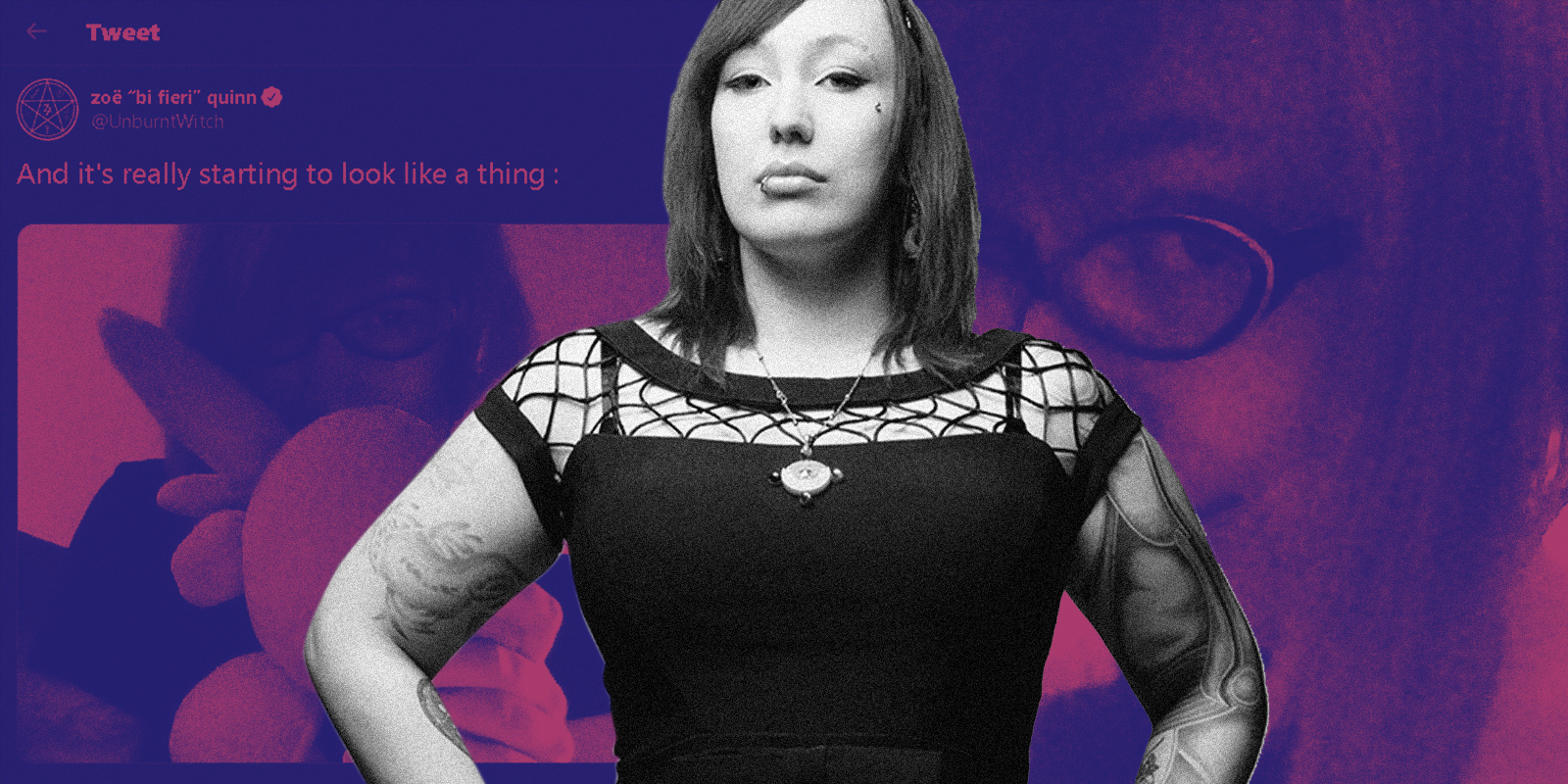 Note: Zoe Quinn’s full statement on Alec Holowka appears at the bottom of this article.

On August 28, 2019, game developer and activist Zoe Quinn issued a multi-post Twitter statement detailing abuse allegedly suffered at the hands of former partner and fellow indie developer Alec Holowka. On August 29, the Night in the Woods development team cut ties with Holowka, and within 48 hours, he had committed suicide. The same day as Holowka’s suicide, Zoe Quinn’s Twitter account was deleted, returning shortly thereafter under a protected lock which enabled only a few select people to access the tweets.

While, in Quinn’s August 28th public statement, Quinn did not specify when the alleged abuses took place, it was stated it was while living in Winnipeg at Holowka’s apartment. A cursory scan of their Twitter reveals Quinn was preparing to leave for Winnipeg at the end of March 2012 for an unspecified period of time and had arrived at the end of March or beginning of April 2012. While those tweets appear to have been deleted and were inaccessible even by The Post Millennial’s source, they had already been screen-captured and archived in a YouTube video prior to the deletion of Quinn’s Twitter account.

In an August 28th statement, Quinn claims to have been “physically confined” to Holowka’s unit, as well as “isolated” from the outside world. Tweets reveal a different story, with Quinn tweeting regularly throughout the time period in Winnipeg with Holowka, sometimes dozens of times per day, communicating with many others and describing Quinn’s time in the city, and documenting many excursions.

Quinn and Holowka also arranged multiple indie game meetups appropriately named Windiepeg in mid-April and early May at Urban Forest where up to 38 other developers were present, many of which had been those Quinn had been interacting with through Twitter.

The couple also appeared as guests on a podcast on April 14th called Indie Function, where they both discussed their projects, and the subject shifted into more personal topics such as how the two met, and their daily lives.

Thirty minutes into the podcast, Quinn discusses having met Holowka on Twitter, direct messaging him first after he interacted with Quinn’s tweets and expressed interest in Quinn’s projects. Specifically, Quinn notes how Holowka supported the mission of having “more than five percent of the industry” be women. Quinn calls their relationship “adorkable,” while being encouraged by Holowka to talk about their project.

Later in the podcast, Quinn excitedly describes day-to-day life: “My life right now is—I wake up, I bullet on a game I care about very passionately, and I pass out from exhaustion.”

“And that’s one of the reasons you don’t really want to be famous … Because that’s what happens. People basically turn you into a cartoon character.”

“You don’t get to be a person anymore. You are a concept.” Quinn adds.

“I’m pretty sure I’m not that well known yet because that hasn’t happened to me. And I don’t think I am that way where I would be characterized as one thing or another.” Holowka says, to Quinn’s agreement, “Everyone is going to get mad and yell about something eventually and then get characterized that way…”

Quinn’s bombshell public statement also claimed that Holowka had “taken control” of Quinn’s then-project It’s Not Okay, Cupid. The podcast, as well as Quinn’s regular tweets while in Winnipeg and after the departure, challenge that assertion.

Dozens of tweets in The Post Millennial’s possession demonstrate Quinn was routinely editing, contributing, and designing the planned game, sometimes with the suggestion Holowka provided inspiration or even encouragement.

According to Quinn’s statement, Holowka also delayed purchasing Quinn’s ticket home as per their arrangement, effectively trapping Quinn in Winnipeg with no funds to return. Quinn states that a roommate, who was frightened, asked if Quinn “needed help getting out,” and help was accepted to flee. However, three tweets sent out between April 24th and April 30th demonstrate Quinn is being dishonest about the circumstances surrounding the return to Toronto. In fact, they prove Quinn was aware of the plan to leave at least 10 days prior to the actual departure. In the tweets, Quinn is discussing an hours-long layover in Montreal, asking if any friends wanted to meet up, and announcing a return to Toronto.

In the August 28th statement, Quinn also says that upon the rapid, anxious escape from the abusive circumstances with Holowka with the help of a roommate, the man did not do so much as acknowledge the departure. But a May 4th, 2012 tweet states that Quinn and Holowka were working hard to “crunch on #itsnotokaycupid” just hours before the flight, entirely disproving the claim.

Interestingly, after Quinn’s return to Toronto, Holowka and Quinn exchanged several, lighthearted public tweets into the month of May, as their work on It’s Not Okay, Cupid continued.

The last tweet shared between Holowka and Quinn was sent on May 10th, and was a single “Hi” from Quinn. Whether or not Holowka responded is unknown due to the locked status of his account.

Statements issued after Holowka’s death demonstrate that it was well-known that there were concerns about his mental health, concerns stemming from long before Quinn’s public accusation surfaced. Scott Benson, Holowka’s development teammate, issued a statement on Kickstarter after the decision to cut ties with Holowka was made, emphasizing that he had a continual history of emotional instability and behavioural problems that he had sought assistance for at different points in time. In the Kickstarter statement, Benson also noted that the termination was not a result of “mobbing” or other social pressures, but the fact of the matter remains that a working relationship of over 6 years ceased only after a very public figure with a very large audience called Holowka out.

Presently, Benson’s allegations both on Kickstarter and his later write-up on Medium have been cited as evidence of Holowka’s abusive disposition on his posthumously updated Wikipedia page.

Alec Holowka’s sister Eileen, in her Twitter announcement of her brother’s death, also noted that her brother struggled with mental health issues, something also reiterated by Quinn in the  August 28th statement.

While it is indisputably true, as Quinn asserts in the statement, that there is no “karmic limit” on abuse or victimization, it is also true that all allegations must be given the respect they deserve and thoroughly investigated. In Quinn’s case, there are undoubtedly significant discrepancies in the statement that was made public on August 28th, and the history that was made available to The Post Millennial for review.

Further, Quinn’s history cannot be neglected when considering the context of the accusations. Quinn’s ex-partner, Eron Gjoni, recently brought attention to extensive discussions had between himself and Quinn on Facebook (Quinn’s has since been deactivated). In these discussions, Quinn mentions being raised by a “pathological liar,” having “brain damage,” and seeking “vengeance” against a man, a game developer Quinn once loved, (allegedly Alec Holowka) with the intention of furthering a career in games.

The new evidence uncovered is not exculpatory. However, it does reveal that Zoe Quinn is no way credible. While all allegations are worthy of investigation and all victims deserving of respect, Zoe Quinn should know better than anyone else that there is an appropriate way to carry out the commission of an accusation and a decidedly inappropriate way. After all, Quinn’s ordeal—GamerGate—began when a public accusation was launched with little means for Quinn to respond, and a retaliation of epic proportions followed. Trial by mob never ends well.

In the statement, Quinn acknowledged knowing that Holowka was prone to self-harm and self-abuse, and based on the statements of others who knew Holowka, it seemed to have been common knowledge that he was suicidal. Understandably, it has left many with the question of why Quinn chose to air the 7-year-old grievances in this way.

The Post Millennial reached out to Zoe Quinn to explain the apparent inaccuracies and inconsistencies in the public statement but was unable to reach Quinn for comment at this time.