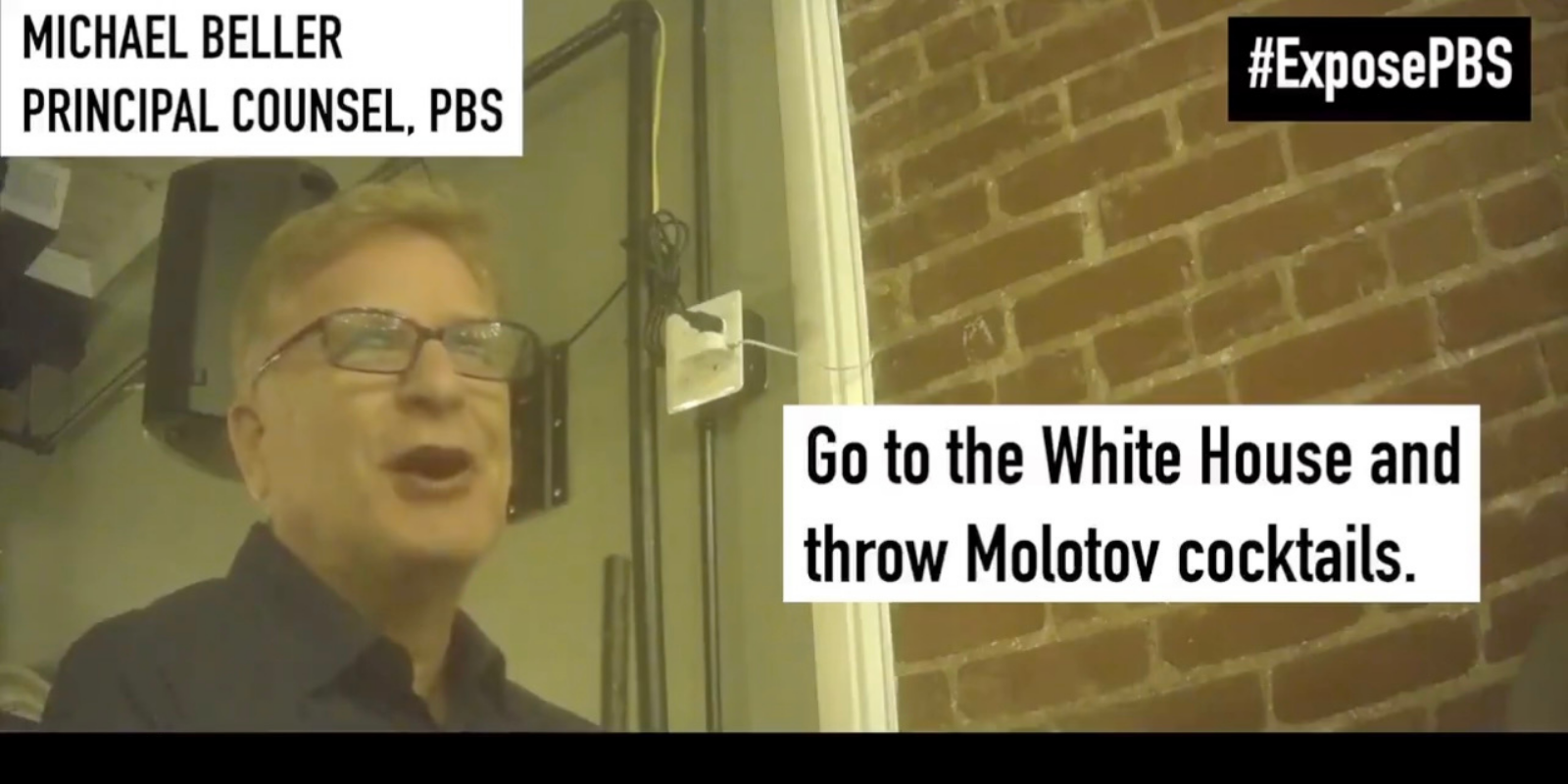 Project Veritas released an explosive video on Tuesday exposing PBS principal counsel Michael Beller for his statements defending violent attacks on the White House, advocating for the children of Trump supporters to be placed in "re-education camps," and praising the COVID-19 inflicted deaths of red state voters.

Beller divulged his radical agenda to Project Veritas when an undercover reporter asked, "What are you going to do if we [Democrats] don't win?"

"Go to the White House and throw Molotov cocktails," responded Beller, revealing his plans if President-elect Joe Biden did not replace the current administration.

Beller even compared President Donald Trump to Adolf Hitler: "In these times, which are unique—I mean Trump—Trump is close to Hitler."

He went on to claim that the children of Trump supporters were being raised to be "horrible people," proposing an evil solution that would send that "generation of intolerant, horrible people" to so-called "re-education camps."

"We go for all the Republican voters and Homeland Security will take their children away," Beller stated on camera. "We'll put them into the re-education camps."

Then he euphemized the term to "enlightenment camps," which he insisted would be "nice" with "Sesame Street characters in the classrooms" as the children would be forced to "watch PBS all day."

"Kids who are growing up, knowing nothing but Trump for four years, you've got to wonder what they're [the children of Trump supporters] going to be like," he suggested.

Beller mentioned that he was happy to live in the nation's capital instead of an American small town, asserting that those residents are not intelligent.

"Americans are so f—ing dumb. You know, most people are dumb. It's good to live in a place [Washington, DC] where people are educated and know stuff," Beller insisted. "Could you imagine if you lived in one of these other towns or cities where everybody's just stupid?"

Beller also admitted that he believes "what's so great" is that the coronavirus is "spiking in all the red states right now."

"So that’s great," Beller said of the COVID-19 surge in Republican strongholds. "A lot of them [red state voters] are sick and dying."

This uptick would aid his political objectives if voters in those battlegrounds would not show up to the polls given their failing health. "Because either those people won’t come out to vote for Trump—you know the red states—or a lot of them are sick and dying," Beller explained.

"PBS has like real news," he maintained. "But CNN doesn't have real news anymore. It's just talking heads talking about Trump all day long."

Beller later mentioned that he "can't stand" watching Fox News "every once in a while," which makes him "want to throw up after five minutes." He claimed that negative reporting on Biden is "all made up" and "ridiculous." The right-wing news outlet pushing this content is "unbelievable," he noted. When asked if his newsroom just ignores this hot topic, Beller said yes.

PBS is a non-profit institution receiving millions of dollars per year from the federal government.

"It is outrageous that a senior executive at a publicly funded media institution is calling for such persecution of political opposition," Project Veritas founder James O'Keefe told his supporters via email. "How can we trust Mainstream Media staffed by individuals like these? Tax dollars pay their salaries."

PBS has since responded to O'Keefe's findings. "This employee no longer works for PBS," the company's official Twitter account wrote. "As a mid-level staff attorney, he did not speak on behalf of our organization, nor did he make any editorial decisions."

"There is no place for hateful rhetoric at PBS, and this individual’s views in no way reflect our values or opinions," the PBS communications team announced. "We strongly condemn violence and will continue to do what we have done for 50 years – use our national platform and local presence to strengthen communities and bring people together."