One of the rioters who was part of the siege of the Capitol building on Wednesday has been identified as John Earle Sullivan, a Black Lives Matter activist from Sandy, Utah. 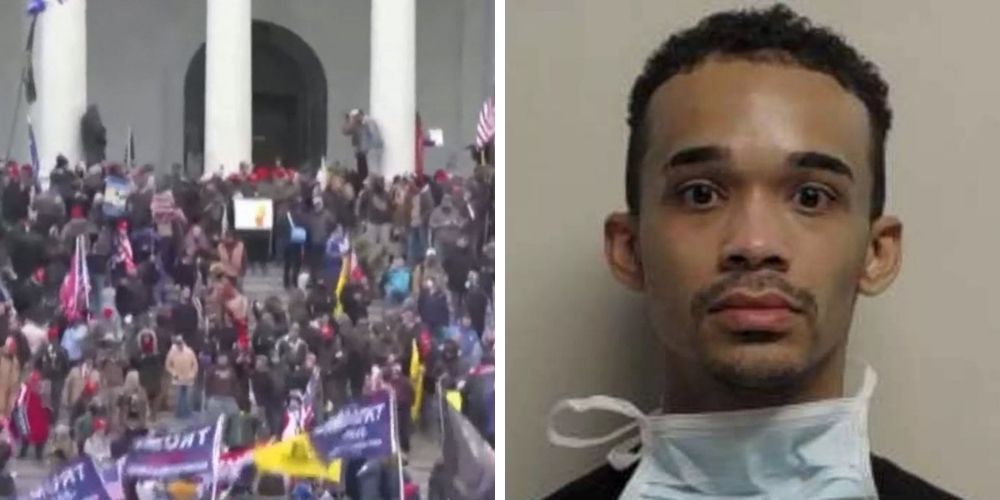 One man who participated in the siege of the Capitol building on Wednesday has been identified as John Earle Sullivan, a Black Lives Matter activist from Sandy, Utah.

Update: Sullivan was detained Thursday evening by police on K and 14th in Washington, DC by the Hamilton hotel.

Sullivan, 25, was arrested & charged in July 2020 where drivers in Provo were threatened & one was shot during a BLM/Antifa riot.

According to KUTV, "John Sullivan is the founder of the civil rights group Insurgence USA and does not align politically with President Donald Trump, but has been in D.C. this week for several planned protests including Wednesday’s rally at the Capitol."

Sullivan told KUTV he was able to get inside the Capitol through a broken window.

During the riot, one woman was shot and killed. Sullivan claimed he was standing right next to her when it happened.

"I remember looking into her eyes and seeing the lifelessness and understanding that she was dead," he said.

Sullivan claimed he was inside the Capitol to "document" the chaos.

The woman who was shot and killed inside the Capitol during the protests, has been identified as Ashli Babbit, a 14-year veteran, who served four tours with the US Air Force.

A police affidavit confirmed Sullivan is part of the Insurgence USA group which planned to "kick these fascists out of DC" on January 6th.

"Protesters traveled through downtown Provo. The protesters did not obtain a permit for the event," the affidavit states. "John Sullivan and Insurgence USA had social media postings promoting other protesters to join them."

"The protest traveled on the roadways blocking motorists who have the right of way. John Sullivan blocked vehicles from freely moving lawfully. During the course of the protest, two handguns were brandished and two shots fired toward a motorist traveling to Home Depot. Vehicles were damaged by protestors as well as by John Sullivan," the affidavit states.

"As a protest organizer John Sullivan is heard and seen as he is promoting protesters to block roadways, keeping motorists from traveling lawfully and freely."

According to the affidavit, Sullivan was also captured on video threatening to beat a woman in an SUV, and then kicking her door, leaving a dent.

According to Deseret News, "Sullivan was seen with Jesse Taggart, the man charged with shooting the motorist, Jesse Keller Taggart, 33, of Salt Lake City, throughout the protest. Taggart was charged with attempted aggravated murder, a first-degree felony, aggravated assault and discharge of a firearm causing injuring, both second-degree felonies, and rioting, a third-degree felony."

According to Deseret News, "on June 29, 2020, a 60-year-old Provo man driving an SUV was attempting to make a turn at the intersection of Center Street and University Avenue when his path was blocked by people protesting police in front of the Provo Police Department, according to officers. The victim later told police that he was attempting to turn to avoid the protesters, according to charging documents, but they "crowded" his vehicle."

"He attempted to pull forward slowly and move through the protesters when an individual approached his passenger-side front door, leveled a handgun and fired through the window. Victim then accelerated to get to safety and then drove himself to Utah Valley Hospital," the charges stated.

The man was admitted to the hospital to be treated for a gunshot wound to his right elbow.

"As a protest organizer, John Sullivan is heard talking about seeing the shooting, looking at the gun and seeing smoke coming from it. John did not condemn the attempted murder nor attempt to stop it nor aide in its investigation by police."