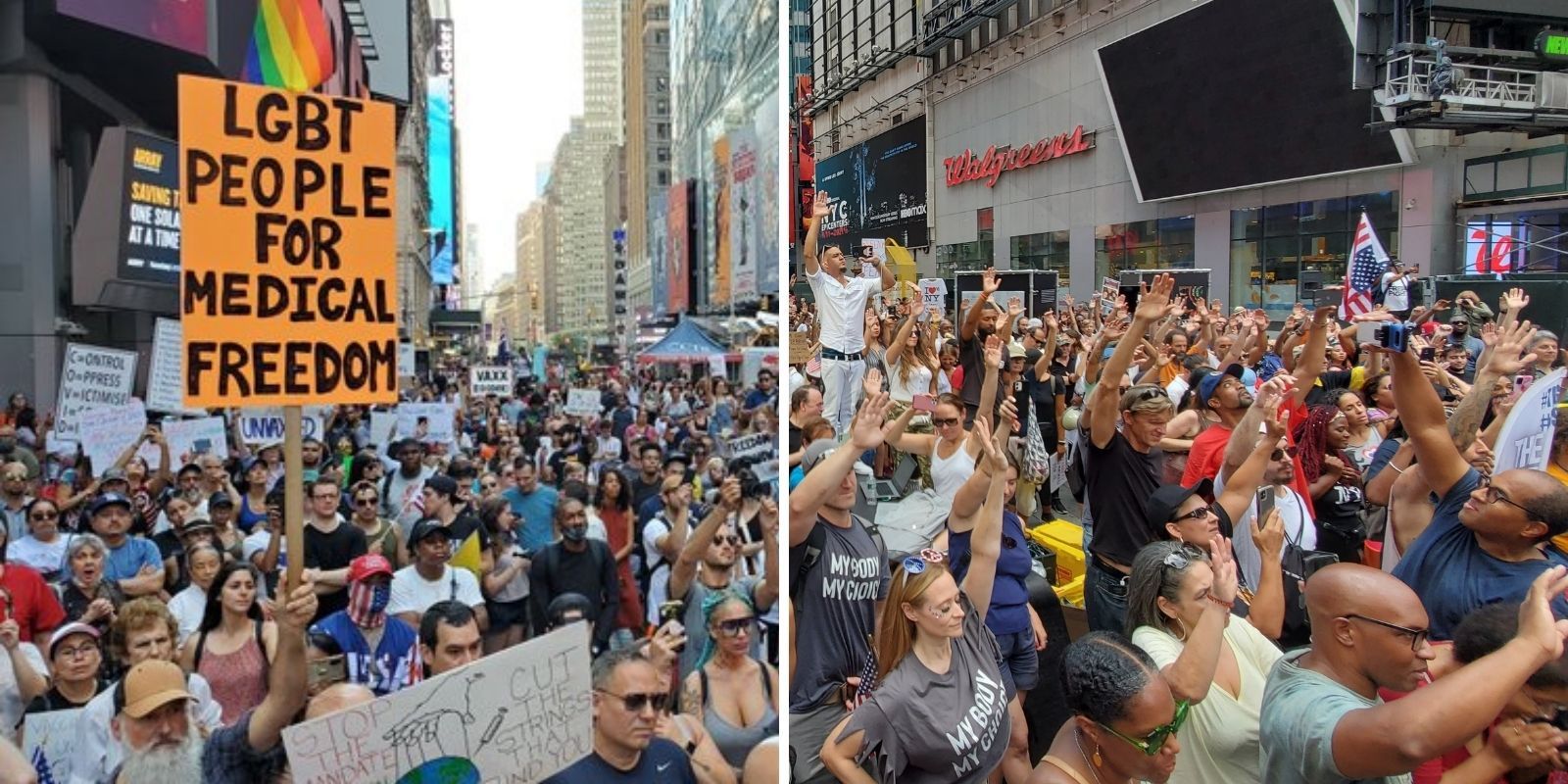 The anti-vaccine mandate protestors had all congregated in Times Square and were listening to speeches. A woman was speaking to the audience in front of a banner reading "World Freedom Now!" and "Truth Over Fear."

"Joe Biden, your patience is wearing thin? We lost our patience!" says the woman at the podium captured in footage of the rally, to which massive cheers erupt as she slowly walks down, having just ended her discourse at that point.

On-the-ground footage of the event was captured Saturday by independent journalist LUKE2FREEDOM who covered the Medical Freedom Rally.

The cheers quickly turn into repetitive chanting of "F— Joe Biden," as the camera pans almost 360 degrees, displaying the scope of the large rally, of just how many protesters are attending, and how many are joining in the chant, which is becoming a bit of a staple at many massive events all over the country these days.

Crowd members of all walks of life can be seen carrying American flags, others waving the famous Gadsden flag and the LGBTQ+ Pride flag. The chanting goes on for over half-a-minute as the mass assembly vented their frustration over the Biden administration at the top of their lungs. There were also mothers in attendance demanding the end of mask mandates for school-aged.

Photos and video from the rally also show that demonstrators were bringing anti-vaccine mandate signs to the protest, stating such lines as "I'm My Own Shot Caller" and "My Body, My Choice." One sign said, "Latinos Against Forced Vaccine." Another protest sign read, "Get Vaccinated Or Get Kicked Out Of School. Not Much Of A Choice. Stop Vaccine Mandate!"

The citywide demonstration was just one of many "World Wide Rally For Freedom" events that took place in cities around the world.

On Sept. 9, Biden announced a sweeping vaccine mandate for businesses with more than 100 employees, which will affect 100 million Americans.

Three women visiting New York City from Texas are facing charges related to an incident in which they allegedly attacked an Upper West Side restaurant's hostess when they were asked to show proof of vaccination on the premises.

The trio of black women are now alleging that they were racially profiled by the 24-year-old Asian worker and were called the N-word during the incident. Following the altercation, Hawk Newsome, co-founder of Black Lives Matter NY, said that the organization plans to hold a protest on Monday in response to the incident.