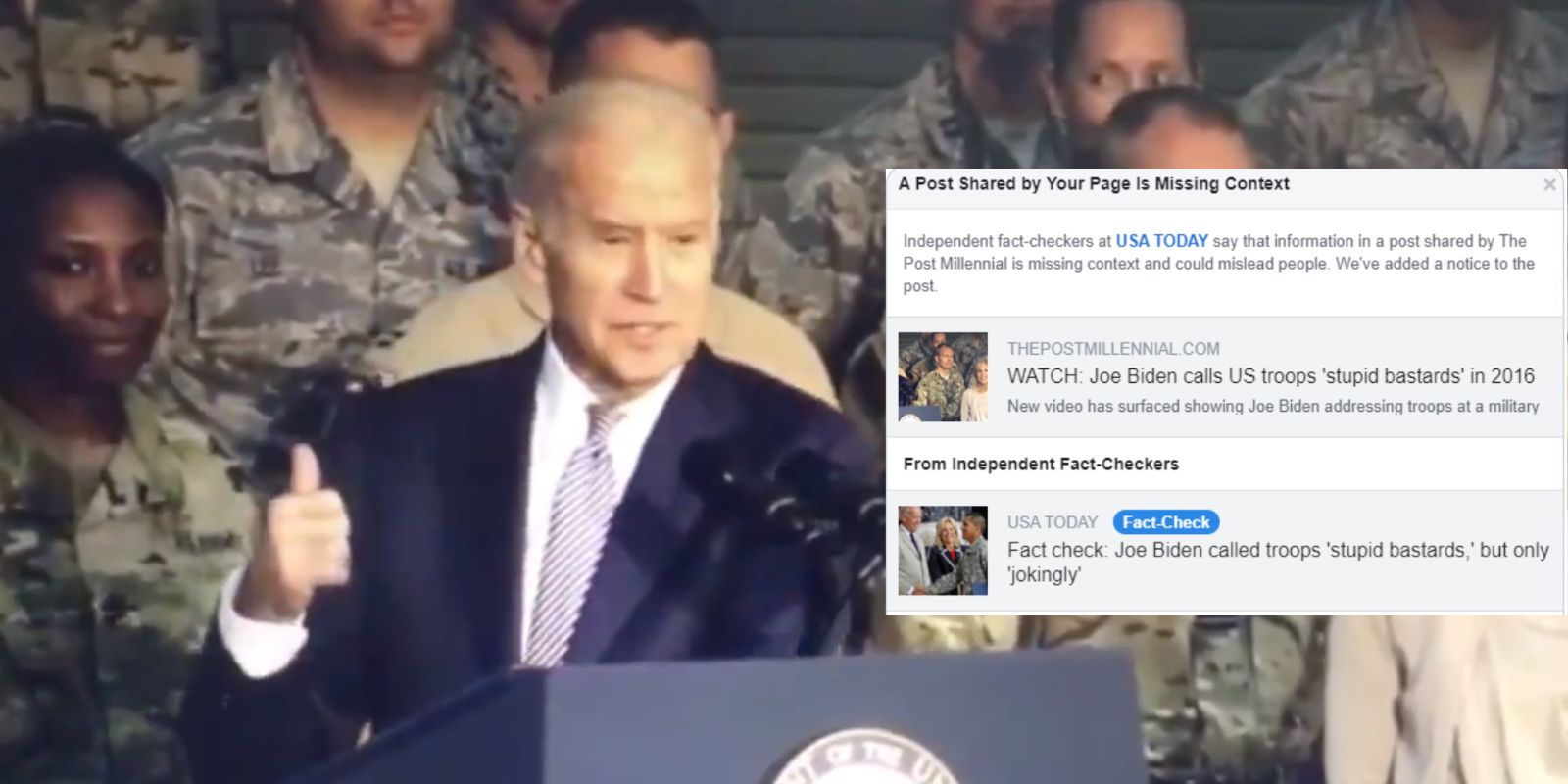 On Wednesday, The Post Millennial was hit with a Facebook fact check by USA Today that suggested one of our articles was "missing context," but the fact checkers' "missing context" was, in fact, not missing. In other words, our article had the context they claimed was missing.

The fact, not in dispute, was that Democrat presidential hopeful Joe Biden called American military troops "stupid bastards." Biden did call them that, back in 2016, and there's video to prove it.

Yet Facebook’s USA Today fact checker smacked a label on the post, saying that there was "missing context." They wrote "Joe Biden called troops 'stupid bastards,' but only jokingly. The check noted that social media posts "lack context.”

Our story, titled "Watch: Joe Biden calls US troops 'stupid bastards' in 2016," asks "Was Biden trying to imitate John Wayne or some sort of 'tough guy' character? Whatever it was, it did not land with the troops.

"If it's a joke, it should be noted that the establishment press has been reporting every single joke Trump has uttered since 2016 as if he was serious."

Above and beyond that, our article also included a comment from Biden’s campaign that read: "Vice President Biden was jokingly encouraging the audience to clap for an airwoman on the stage, and a number of service members can be seen laughing and smiling at the comment. Seconds before, he praised them for 'the incredible sacrifices [they] make for our country,' Biden campaign spokesperson Andrew Bates told The Daily Beast."

We can only conclude that the fact checkers are displeased because we didn't state, first and foremost, that Joe Biden said this horrible thing with the intention of being amusing. Fact checkers are not content to check facts, they are now checking intention.

Fact checkers didn't care when President Donald Trump made jokes about curing coronavirus with bleach. They didn't care that Trump was smeared in John Bolton's book as saying mean things about US troops that many contend he absolutely did not say.

But they do care that we said Biden said something that he absolutely did say, simply because we didn’t state in our post his intentions behind saying it, but stated them in the accompanying article.

Intentions are not fact. It is not factual to presume to know the former Vice President’s intentions when reporting on his words, yet we did presume that he was joking—our fact checker contended that he was joking—and suddenly intention is no longer up for debate, but is the purview of those deemed responsible to determine fact from fiction.

So why would USA Today target us with an erroneous fact check? Well, we are not conspiratorial by nature, but it is interesting that just a few hours before the USA Today fact checkers flagged us, we ran an article called "USA Today fact checks The Babylon Bee over satire about raising RBG from the grave," which pointed out that USA Today fact checked satire, which is, by definition, not a fact, but a form of entertainment.

Is it possible that USA Today fact checkers are weaponizing their ability to flag articles on Facebook? It's impossible to say, and if so they would never own it. It may just be coincidence. But if it is, that confirms that USA Today has no business fact checking anything. If this fact check wasn't malicious, then it was simply incompetent. Either way, that's really not a vote of confidence for their ability to check facts.

The fact checkers used by social media companies like Facebook have been given the keys to the kingdom of reality, and they're making a mess of it. With little training, with a penchant for stating facts are false simply because they do not match their bias, or their presumption of a man’s intentions, these companies are doing more than sussing out truth from falsehood.