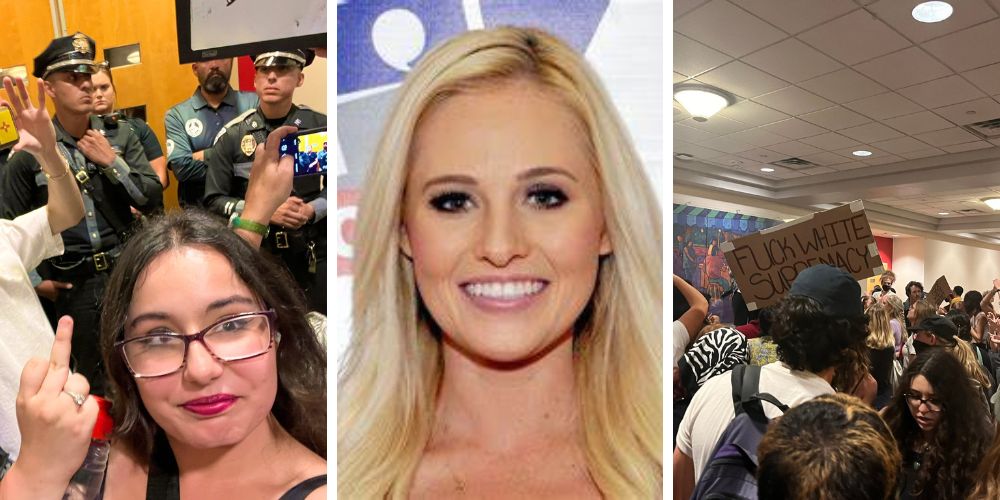 Ari Hoffman Seattle WA
Sep 16, 2022 minute read
ADVERTISEMENT
ADVERTISEMENT
Political commentator Tomi Lahren was set to speak at the University of New Mexico on Thursday night, but her speech was shut down by far-left activists. The event was canceled after Lahren was barricaded in a back room for 45 minutes, and she left under police escort.

Almost 100 people gathered on the campus in Albuquerque to protest the event. These activists made their way into the building and outside the room where Lahren was speaking. University of New Mexico Police and New Mexico State Police were also on campus for the event, KRQE reported.

Ashley Glasgow, Rockies Field Rep for TPUSA, was on hand to capture the protests.

Video from the event protestors chanting "F*ck Tomi Lahren", many of them carrying signs including one that read "Jesus was Black." Later, protestors can be heard chanting "shut it down" as event organizers were forced to hold the doors shut. Inside the event, attendees chanted "USA."

Damage to the building could be seen in photos shared with The Post Millennial after the event. 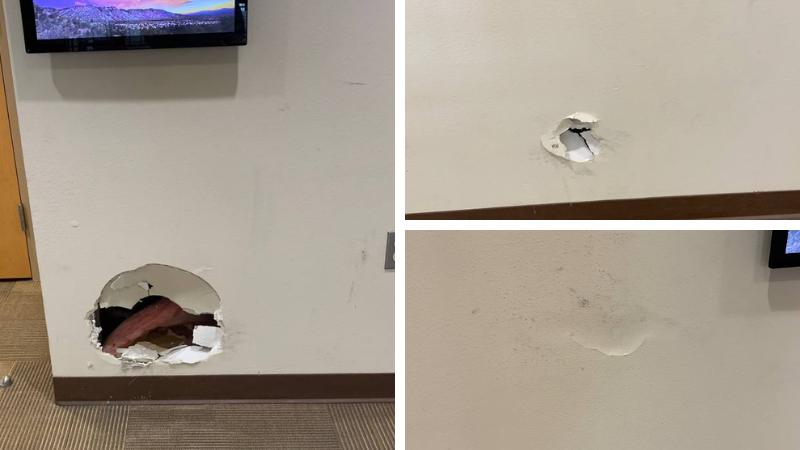 "State police had to be called to my speech tonight at UNM," Lahren posted on Instagram, "after rapid and repulsive liberals tried to break down the door and attack me and the speech-goers. Apparently, University of New Mexico is unbothered by the abhorrent and violent behavior of their students."

"Thank you to all the patriots who stood strong and supported me despite the animals outside," Lahren wrote. "Thank you to the law enforcement officers who got me out safely. Thank you to @turningpointunm for hosting me," she wrote. The event was hosted by Turning Point USA, a conservative student group that organizes, educates, and trains students to promote the principles of freedom, free markets, and limited government.

"I came here to speak in Albuquerque University of New Mexico," Lahren said. "I know that there was a protest planned, usually when I speak there's a protest planned and usually it's small, it's manageable, just some rowdy people, disgruntled liberals, you know, the standard."

"That's not what happened," she continued. "A protest started, we were in a room, they were outside of course, screaming and chanting the F word, discussing things, and then it turned violent."

Protesters "started pushing the officers that were guarding the door, trying to bust in the door," she said.

"I don't know what they were trying to do to me and to the others that were there listening to the speech, but they tried to bust through the doors," she said.

"Then at one point, they almost made it through the door, Lahren added. "Officers having to barricade it… not nearly enough officers were present. I don't think anybody knew it was gonna be this bad. But then somebody pulled the fire alarm. The alarms are going off everywhere. We were all basically barricaded in this room."

Lahren said, "You do have your tuition-paying students that were in that room to listen to a speaker, and they were in danger. We were all in danger. Then the state police had to be called, the emergency unit had to be called in because that's how bad it got. We were barricaded in the kitchen for probably about a half an hour to 45 minutes."

The local Daily Lobo claimed that "Multiple students of color were denied entry at the Turning Point USA-sponsored 'Talking With Tomi' event at the University of New Mexico Student Union Building's Ballroom B on Thursday, Sept. 15."

They claimed that those students, who arrived with signs, chants, and mouths full of curse words, "did have tickets but were turned away by Turning Point staff, according to Tyler Jacobs, one of the UNM students who was denied. Multiple witnesses at the event reported seeing students being denied entry."

The video shows what those student activists were intending to do once they attained entry, which was to shut down the event. This they were able to do without having to attend the speech.

"Simultaneously, hundreds of students and community members gathered inside and outside the SUB to protest the event. Protestors set up microphones from which they gave speeches during the event. No single group claimed to have been the sole organizer of the protest," The Daily Lobo reported.

Activist students intend to continue protesting TPUSA events when they can. "Students at the event, including speaker Juile Bettencourt, said that they will continue to protest at Turning Point-hosted events on campus and their presence at UNM," The Daily Lobo reported.

The outlet claimed that "the protesters remained nonviolent through the duration of their demonstration."

Lahren placed the blame for the incident on the university. "I'm hoping that nobody got hurt tonight on either side. But if somebody did get hurt, that is on certainly on the head of the University of New Mexico," she said.

"I am so disgusted, but I'm also so thankful for TPUSA at the University of New Mexico," noting that those who organized the event "are gonna get a lot of backlash. I know that they're gonna have to deal with a lot of their disgusting rabid banty classmates and good for them for holding through their guns, sticking strong, um, being conservative and being independent-minded people and patriots through and through."

Lahren added, "I'm hoping that everybody else that was at that speech attended that speech got home safely." She went on to say that "We can't let them intimidate us. We can't let them and their discussing behavior keep us from being patriotic individuals and we must always rise above and never stoop to their level."

The University of New Mexico released a statement in response to the event, saying "The University of New Mexico is committed to the principles of free speech and values its role as a public square for debate, a marketplace of ideas, and a place to test and challenge competing viewpoints and opinions. In this context, allowing speakers invited by a student organization on campus in no way implies an endorsement of the content of their speeches or their opinions. And those who disagree with the ideas expressed are encouraged to respectfully voice their perspectives."

Erica Rodriguez, TPUSA's UNM Chapter President said in a statement that there was no warning from the university that "it would get crazy" or that protestors would "even be resent." She said that "building management and security said protesters wouldn't even be allowed to come into the building."