The incident took place just after 1:30 a.m. Friday morning while the aircraft was taxiing, according to a spokesperson for the airport. 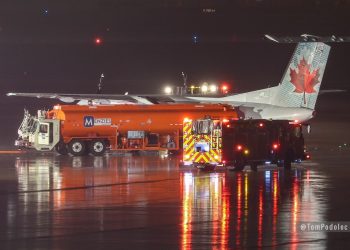 Five people have been hospitalized following an airplane’s collision with a fuel tank truck at Toronto’s Pearson Airport.

The incident took place just after 1:30 a.m. Friday morning while the aircraft was taxiing, according to a spokesperson for the airport.

Air Canada Jazz 8614 was cleared to taxi to the gate after landing when the collision took place.

“The aircraft came to a full stop and the crew deplaned passengers quickly and they were escorted into the terminal building,” says Debra Williams, communications manager for Jazz Aviation.

“EMS arrived to assess passengers and crew. Three crew and two passengers were transported to the hospital for further assessment – four have now been released.”

“At 1:36 a.m. an Air Canada Jazz aircraft came into contact with a Menzies fuel truck while taxiing on the apron,” Toronto Pearson tweeted.

“Airport emergency services responded. Passengers and crew evacuated safely to T1. The aircraft and vehicle were removed and no operational impact at the airport.

“The incident isn’t the first of its kind, and far from the first to take place at the Pearson airport. at least 25 runway incursions have happened at Pearson since June 2012, according to a report from 2017.