Following that night, lawmakers and media personalities alike jumped on the bandwagon of calling the then-17-year-old a "white supremacist" as well as a "domestic terrorist." 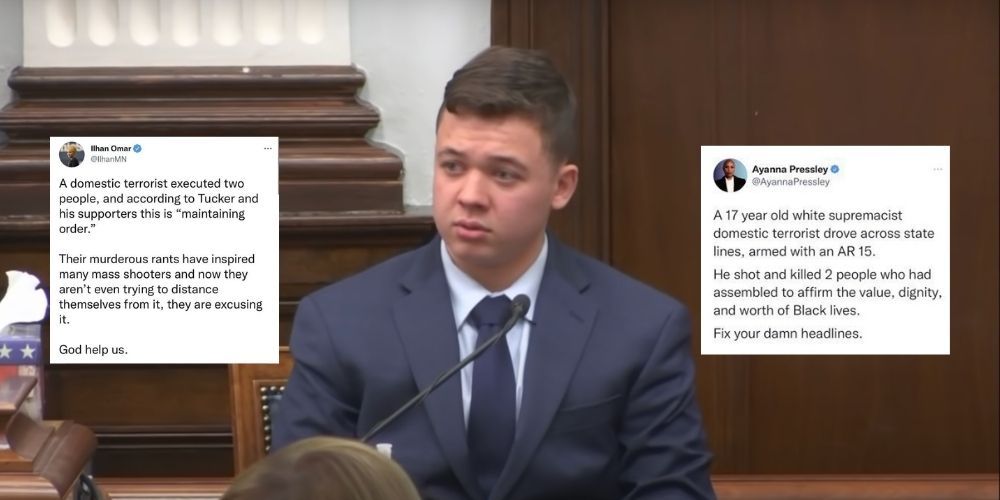 On Friday, Kyle Rittenhouse was found not guilty of all counts that stemmed from the night of August 25, 2020, in which he shot three men in self-defense.

Following that night, lawmakers and media personalities alike jumped on the bandwagon of calling the then-17-year-old a "white supremacist" as well as a "domestic terrorist."

President Joe Biden called Rittenhouse a white supremacist last year, both in an interview with CNN, as well as in a campaign ad, equating the teen to those that attended the fatal Unite the Right rally in Charlottesville, Virginia in 2017.

"I don't know enough to know whether that 17-year-old kid, exactly what he did, but allegedly he's part of a militia coming out of the state of Illinois. Have you ever heard this president say one negative thing about white supremacists? Have you ever heard it? That's the reason I got back in this race because what happened in Charlottesville," Biden said in a 2020 interview with CNN's Anderson Cooper.

Other lawmakers, including Squad members Ayanna Presley, Ilhan Omar, and Cori Bush all used this language as well to describe Rittenhouse.

Now that Rittenhouse has been found to be not guilty on all counts, many are now asking if Rittenhouse will go after those that used this language against in defamation suits.

"All they want is due process for me, but not for thee. They're taking sides, They're cheering, they're rooting. The New Yorker, that trashy magazine, … already dubbed [Rittenhouse], without any evidence, the 'American Vigilante,'" he continued.

Nick Sandmann, the Covington Catholic student that filed numerous defamation suits against outlets like CNN and The Washington Post after they labeled him a racist, outlined in a piece for the Daily Mail how hard defamation suits can be to win.

"While I am by no means an attorney, I have gained some experience on the ins and outs of defamation and can offer an educated guess on what the outcome would be if Kyle were to sue," wrote Sandmann.

He continued on to note that "defamation cases are some of the hardest cases to win," highlighting how a plaintiff must prove what was said about them was false, and how statements like "white supremacist" and "racist" can be construed as a person exercising their First Amendment rights.

"Should Kyle sue? It first depends on what happens in the trial, as those elements would come into play were he found guilty. However, if Kyle is innocent it would create an easier road to winning," Sandmann said.