FLASHBACK: Trump defended Kyle Rittenhouse in 2020 after he was attacked

"That was an interesting situation. You saw the same tape as I saw. And he was trying to get away from them. I guess it looks like, and he fell, and then they very violently attacked him." 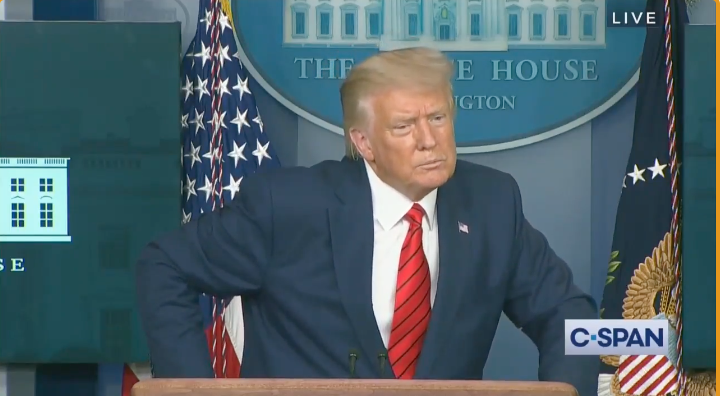 Only a few days after the riots in Kenosha, Wisc., during which Kyle Rittenhouse, on August 25, 2020, shot three white men, killing two, in self-defense, then-President Donald Trump defended the teen.

Speaking to reporters from the White House briefing room, Trump was asked about Rittenhouse's actions. "It was a supporter of yours, Mr. President, who killed someone, who was accused of killing two people—" a reporter began before she was interrupted by another reporter, who asked, "are you going condemn the actions of vigilantes like Kyle Rittenhouse?"

"We're looking at all of it," Trump said. "That was an interesting situation. You saw the same tape as I saw. And he was trying to get away from them. I guess it looks like, and he fell, and then they very violently attacked him. And it was something that we're looking at right now and it's under investigation, but I guess he was in very big trouble. He would have been, he probably would have been killed, but it's under investigation."

"Do you think private citizens should be taking a gun—?" He was asked.

"I'd like to see law enforcement take care of everything. I think everything should be taken care of, law enforcement. But again, we have to give our cops back our police back their dignity, the respect— they're very talented people they're strong," Trump said.

On the debate stage on September 29, 2020, Trump was asked to condemn white supremacy, which he did several times, along with Antifa. Trump stated additionally that "almost everything I see is from the left-wing not from the right-wing." Trump said that "somebody’s got to do something about Antifa and the left because this is not a right-wing problem this is a left-wing. This is a left-wing problem."

Biden said in response that "Antifa is an idea, not an organization." Media then claimed that Trump refused to disavow white supremacists.

For his statements, which condemned white supremacy and their left wing counterparts, then-candidate Joe Biden slammed Trump, putting out a campaign ad after their debate that claimed Trump "refused to disavow white supremacists," and using an image of Rittenhouse to make his false point. Not only was what he said about Trump a lie, but Rittenhouse has been exonerated for shooting three white men, killing two, in self-defense.

In response to the verdict issued by the jury in the Rittenhouse case on Friday, Biden said that it left him feeling "feeling angry and concerned," and he called for "peaceful protest" from those equally as disheartened by himself at the just ruling.

Trump has since congratulated Rittenhouse on the verdict: "It's called being found NOT GUILTY—And by the way, if that's not self-defense, nothing is!"

Kenosha was the site of three nights of rioting in the wake of the shooting of Jacob Blake by police on August 23 of last year. Blake was shot by officers responding to a domestic call as they attempted to enforce a restraining order against him. Blake was left paralyzed after the incident.