In 2020, Twitter's engineers said they had begun phasing out potentially-offensive terms that are often used in computer programming, and replaced them with what they considered more socially acceptable language.

Ari Hoffman Seattle WA
Dec 9, 2022 minute read
ADVERTISEMENT
ADVERTISEMENT
The second round of Twitter Files revealed that the social media giant had actively blacklisted conservative commentators such as Charlie Kirk and Dan Bongino. Yet the company claimed in 2020 that it had banned the term “blacklist.”

In July 2020, during the riots that followed in the wake of the death of George Floyd, Twitter had pledged to use more inclusive language in its programming code, and vowed to drop terms like "master," "slave," "whitelist" and "blacklist."

The company’s engineering team claimed at the time that the platform had begun phasing out potentially-offensive terms that are often used in computer programming, and replaced them with what they considered more socially acceptable language.

This is despite the terms referring to computer terminology. For example, "master" in the community refers to the main version of a piece of code, while "slave" is used to describe the code it controls. 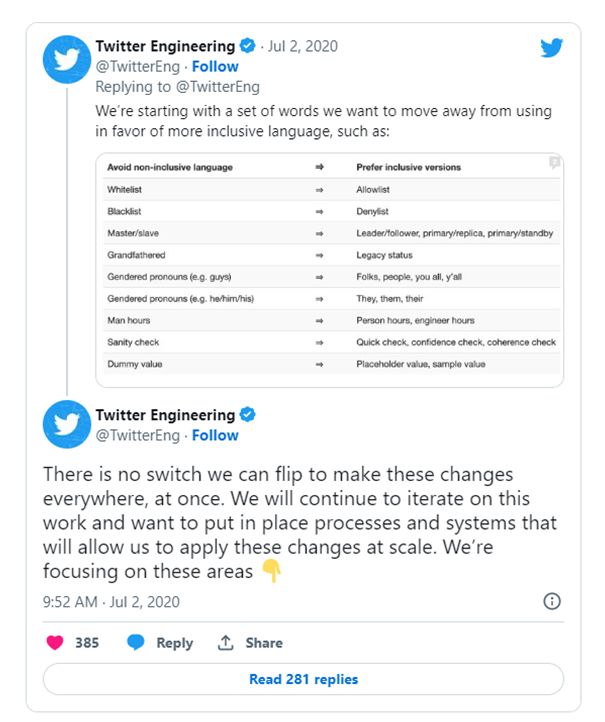 In the posts, the social media giant claimed that it would “use leader/follower instead of “master” or “slave” while “whitelist” would be referred to as "allowlist" and “blacklist” would be designated "denylist."

According to a screenshot of flagged terms, Twitter also removed other “potentially-offensive” words, including "sanity check," "man-hours," and "dummy value."

Twitter posted at the time, "inclusive language plays a critical role in fostering an environment where everyone belongs. The language we have been using in our code does not reflect our values as a company or represent the people we serve. We want to change that."

"There is no switch we can flip to make these changes everywhere, at once. We will continue to iterate on this work and want to put in place processes and systems that will allow us to apply these changes at scale. Words matter in our meetings, our conversations, and the documents we write. We know there's still a lot of work to do, but we're committed to doing our part."

At the time the move was hailed by other tech companies.

It turns out, the pledge was an empty promise and purely virtue signaling.

Independent journalist Bari Weiss revealed on Thursday night that conservative commentators such as Don Bongino had been labeled with a "Search Blacklist" tag, which effectively made them invisible, despite having no strikes.

"Secret blacklists" were compiled by teams of employees to "prevent disfavored tweets from trending, and actively limit the visibility of entire accounts or even trending topics" which is known as “shadow banning.”

According to screenshots provided to Weiss by Twitter CEO Elon Musk, Stanford’s Dr. Jay Bhattacharya, who argued that Covid lockdowns would harm children, was placed on a “Trends Blacklist,” which prevented his tweets from trending.

Former CEO of Twitter, Jack Dorsey denied that the company was shadow-banning in 2018. He posted at the time, "A short thread addressing some issues folks are encountering as a result of our conversational health work, specifically the perception of 'shadowbanning' based on content or ideology. It suffices to say we have a lot more work to do to earn people’s trust on how we work."

He added, "We don’t shadow ban, and we certainly don’t shadow ban based on political viewpoints. We do rank tweets by default to make Twitter more immediately relevant (which can be flipped off)."

Dorsey linked to an article co-written by former Twitter Head of Legal, Police, and Trust Vijaya Gadde titled "Setting the record straight on shadow banning" which she authored with Twitter co-founder Kayvon Beykpour.

The pair wrote, "People are asking us if we shadow ban. We do not. But let’s start with, 'what is shadow banning?' The best definition we found is this: deliberately making someone’s content undiscoverable to everyone except the person who posted it, unbeknownst to the original poster."

Dorsey and other former Twitter executives were dragged on social media for lying when Weiss' reporting revealed that the tech giant did shadow ban under the moniker of "Visibility Filtering."

Weiss’s reporting was a follow-up to The first round of Twitter files that confirmed the social media company censored stories and interfered in American elections, especially centered around the suppression of the Hunter Biden laptop story and Gadde played a key role in that move.

According to Weiss, “there existed a level beyond official ticketing, beyond the rank-and-file moderators following the company’s policy on paper. That is the ‘Site Integrity Policy, Policy Escalation Support,’ known as ‘SIP-PES.’”

“This secret group included Head of Legal, Policy, and Trust (Vijaya Gadde), the Global Head of Trust & Safety (Yoel Roth), subsequent CEOs Jack Dorsey and Parag Agrawal, and others” and “This is where the biggest, most politically sensitive decisions got made. “Think high follower account, controversial.”