"Whitelist" is now "allowlist," for example, while "blacklist" is now "denylist," and "master/slave" is now “leader/follower” among other variations. 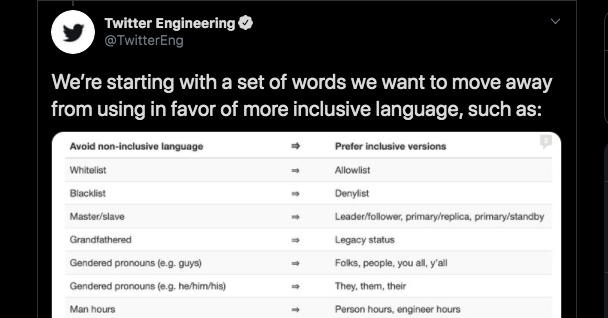 Twitter has censored its engineers from using "racially charged" terminology that is often found in technical programming languages. "Whitelist" is now "allowlist," for example, while "blacklist" is now "denylist," and "master/slave" is now “leader/follower” among other variations.

"At Twitter, the language we have been using in our code does not reflect our values as a company or represent the people we serve. We want to change that. #WordsMatter," Twitter Engineering tweeted out.

Regynald Augustin is the black programmer at Twitter who ignited the "politically correct" effort after he received an email last year that contained the phrase "automatic slave rekick."

The words were just engineering jargon, but Augustin was enraged over what he believed to have "racist" connotations. He had seen the term "slave" used with "master" before to describe the relationships between two computer hard drives or two camera flashes.

“But with 'rekick'—I was madder than I ever thought I'd be in the workplace,” Augustin said in a CNET report.

Alongside engineer Kevin Oliver, Augustin spearheaded the company’s internal phasing out of these "microaggressions" of engineering terminology.

"Everything that's happened recently has made awareness spread blisteringly fast around the company," Augustin told CNET.

In the chain, Twitter Engineering listed other "insensitive" expressions that have "sexist overtones" like the commonly-used "gendered" pronouns, "man hours," and "grandfathered."

By the end of 2021, Twitter is set to finish its computing language project and will publish details as a precedent for other companies to mirror and "learn from."