Following the inauguration of President Joe Biden Thursday, thousands of National Guardsmen were forced to leave the Capitol grounds and National Mall they were protecting and are stuck bunking in nearby congressional parking garages. 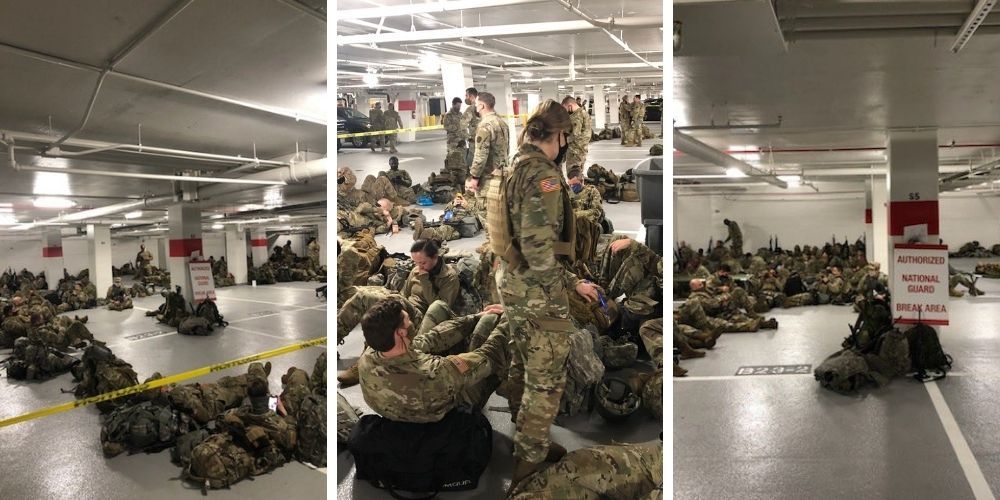 Following the inauguration of President Joe Biden Thursday, thousands of National Guardsmen were forced to leave the Capitol grounds and National Mall they were protecting and are stuck bunking in nearby congressional parking garages.

Over 25,000 Guardsmen from around the country were ordered to Washington DC following the Jan 6 riot at the US Capitol, to provide additional security for the inauguration. The guard has been on station for two weeks.

According to Politico, one of the Guard units, which had been demobilizing at the Dirksen Senate Office building, was told to leave the facility. The group took refuge in a the congressional parking garage, with only one electrical outlet and one bathroom for 5,000 troops. To make matters worse, there was also no internet reception. Politico added that troops were ordered to "vacate the Capitol and nearby congressional buildings on Thursday, and to set up mobile command centers outside or in nearby hotels."

"Yesterday dozens of senators and congressmen walked down our lines taking photos, shaking our hands and thanking us for our service. Within 24 hours, they had no further use for us and banished us to the corner of a parking garage. We feel incredibly betrayed," a Guardsman said.

Photos showed members of the Maryland National Guard sitting and lying down on the concrete floor of a parking garage without heating after light snow fell in DC the day of the inauguration.

One National Guardsman told Task & Purpose, a military support outlet, "There’s one toilet for somewhere between 500 and 100 people, there’s no water fountains or anything, no power strips to charge our radios and cell phones, which have been our primary mode of communication since we’ve been here. It’s pissed a lot of dudes off."

According to Task and Purpose, "Guardsmen had previously found lodging not only in local hotels, but in the Hart, Dirksen, and Russell Senate office buildings, according to the Guard source, with some occupying the tennis courts in the Hart building. It was only on Thursday, following the inauguration, that hundreds of Guardsmen were suddenly expelled from the buildings and told to take shelter in the nearby congressional parking garages."

There is a concern about how many of the Guardsmen have had or been exposed to the COVID -19 virus. There is also a concern over exhaust fumes from cars were entering and leaving the garage near the Guardsmen. One Guard member told Task and Purpose, "It’s f*** up because it just shows how politicians really feel about the National Guard. Leaving our families for the last two weeks to come down here … it’s certainly important and historic, but the day after inauguration you kick us literally to the curb? Come on, man."

Senator Krysten Sinema, (D-AZ), even offered her office to the troops and tweeted, "This is outrageous, shameful, and incredibly disrespectful to the men and women keeping the U.S. Capitol safe and secure. We need it fixed and we need answers on how it happened."

Last week, photos of National Guardsmen resting in the halls of the US Capitol building following the Jan. 6 riot. In response to the photos, Guardsmen were provided cots.

Guard spokesperson Major Matt Murphy told Politico "As Congress is in session and increased foot traffic and business is being conducted, Capitol Police asked the troops to move their rest area. They were temporarily relocated to the Thurgood Marshall Judicial Center garage with heat and restroom facilities. We remain an agile and flexible force to provide for the safety and security of the Capitol and its surrounding areas."

Following public outcry and pushback from many lawmakers on both sides of the aisle,  the National Guardsmen were welcomed back to the Capitol complex.